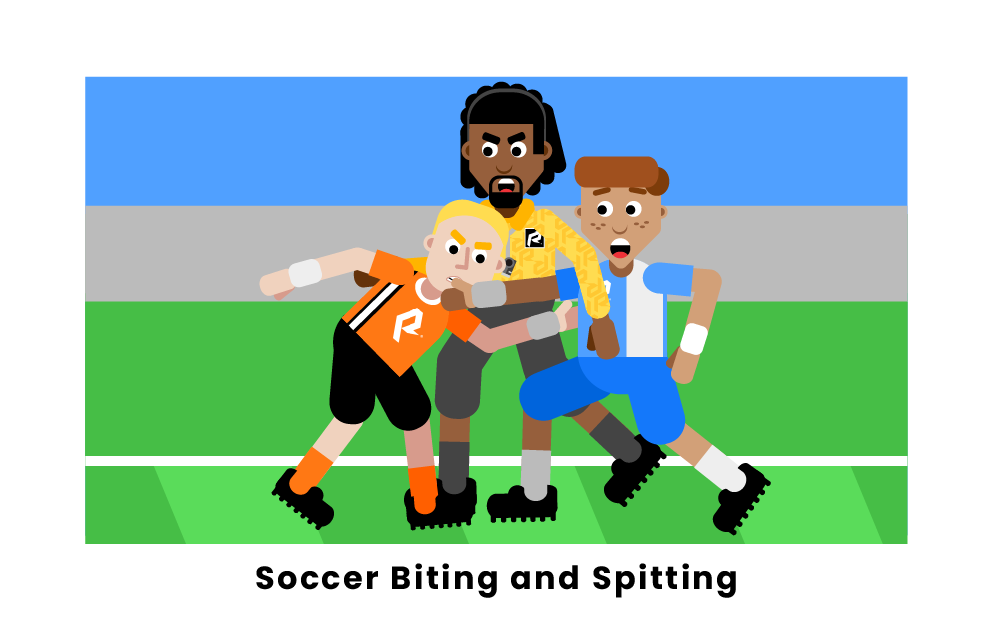 Fouls are common in all sports and soccer is no different. However, spitting at and biting an opponent have no place on the pitch. Yet offenses of this nature still take place, such as Luis Suarez's famous incident in 2014. If a player does spit or bite, the opposing team is awarded a free indirect kick.

In most recognized soccer leagues, any form of biting or spitting constitutes a foul. According to the International Football Association Board (IFAB), the official rulebook classifies biting and spitting as a misconduct foul according to Law 12. If a referee observes a player performing this act on the field of play, he will blow his whistle and stop play. The call is ultimately up to the judgment of the referee on the field and may lead to yellow and red cards being issued to the offending player.

If a biting and spitting foul is called, a direct free kick is awarded to the other team at the spot of the foul. According to IFAB rules, the offense of biting or spitting at an opponent is also worth a yellow card and possibly a red card, depending on the severity of the offense. In FIFA regulations, the rules are slightly more strict and call for an immediate red card. A penalty kick is awarded to the opposing team if the penalty occurs within the penalty box or off the field.

Similar Offenses to Biting and Spitting

What are some famous instances of biting in soccer?

One of the most famous incidents of a player biting another player during a match occurred during the 2014 World Cup. In the contest, Uruguay's star Luis Suarez famously bit Italy's Giorgio Chiellini and left a mark on his shoulder. Suarez was not penalized during the match despite obvious evidence, and this incident became notorious. Suarez also became vilified as he had two other previous instances of biting an opponent, Chelsea's Branislav Ivanovic on the arm in 2013 and SV Eindhoven's Otman Bakkal on the shoulder in 2010.

What are the consequences of being called for biting or spitting on an opponent in soccer?

Biting or spitting typically results in a direct free kick from the spot of the foul or a penalty kick if the offense happens in the penalty box or off the field. The offending player may even be penalized after the match has concluded either by a suspension from future games or a significant fine.

Can you be suspended for biting or spitting on an opponent in soccer?

A player can definitely be suspended for biting or spitting on an opponent in soccer. Some referees may even throw the player who performed the act out of the game while still going on. The range and length of the ban or suspension are dependent on the severity of the action and the league they are playing in. Suspensions can range from one game to an indefinite number of games.