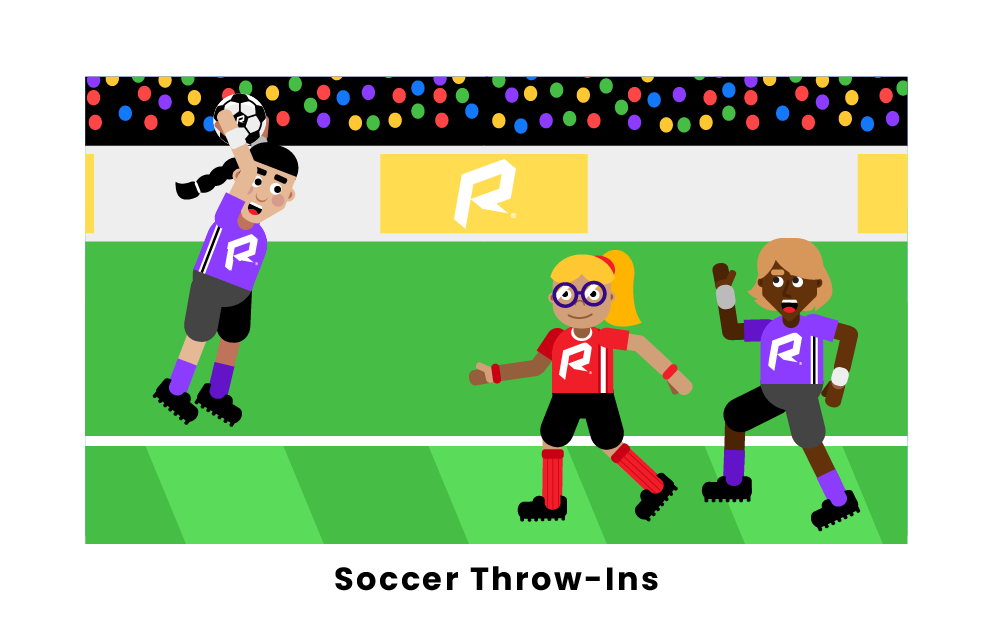 Only goalkeepers are allowed to use their hands in the field of play. However, when a ball is kicked out of bounds along the touchlines, a field player can throw the ball inbounds with certain rules. In this tutorial, we will learn about one of the ways to restart play after the ball has crossed the touchline called a throw-in.

What is a throw-in in soccer?

A throw-in is the act of throwing the ball back into play after it has been kicked out of bounds along the touchline. A throw-in is taken by the team who did not kick the ball out of bounds and must be done within two yards of the spot where the ball crossed the touchline. The player throwing the ball is not allowed to have their foot on the touchline before or during the throw, and must make a two-handed throw, with the ball starting behind the player's head. Once the throw is completed, the player is allowed back in the field of play.

Both feet must be touching the ground at the time that the ball leaves the players’ hand. Some players are so skilled at generating power and distance on their throw-in that they can send the ball all the way into the penalty box from a parallel spot on the touchline. Even more remarkable are the players who can perform a flip throw-in!

What is the job of your teammates on a throw-in?

On a throw-in, teammates on the field will make runs to get open and receive the ball either at their feet or in space. The player taking the throw-in can wait a few moments until there is a good opportunity to connect with an open teammate.

How long can you take on a throw-in?

If the thrower delays for an excessive amount of time just to avoid turning over the ball, they will be warned by the center official and told to hurry up play. If they continue to wait, it may result in a turnover to the other team.

There are a few rules that dictate whether a throw-in is legal or illegal. It is the job of the referee and assistant referee to watch carefully and sanction the following violations.

The ball must be held with two hands and first go behind the head before release. Both feet (or part of the foot) must be touching the ground and behind the touchline. If a player violates these rules, the ball will be awarded at the same spot with a throw-in for the opposing team.

To gain an advantage, some players will turn their body as if to make a throw-in and then creep up the sideline closer to their own offensive goal, claiming a few extra yards. The center official will watch for this behavior and, if it is excessive, motion to the thrower to return to the spot where the ball left the field of play.

The thrower cannot touch the ball first. In other words, a player cannot drop the ball in play for herself to make the first touch and take possession. If they want to possess the ball, they must pass it in to a teammate who must then pass it back to the thrower.

What area on a soccer field do you perform a throw in from?

In soccer, throw-ins are performed on either touchline of a soccer pitch. The touchlines are the longer sidelines that run perpendicular to the goal lines. Any ball that crosses over a touchline automatically results in a throw-in, while any ball that crosses over the goal line results in a goal kick or corner kick. A throw in is performed at the same spot where the ball crosses out of bounds.

Can you throw in a goal in soccer?

No, you can not throw in a goal in soccer. If a player throws in a ball and it directly enters the net without being touched by another player, the goal will not count. However, if the ball does touch any player before entering the goal, it will count.

When does a throw in happen in soccer?