Naturally, a team is not going to sit back and allow another team to move the ball around them without playing defense. Let's learn about tackling, the way teams try to prevent ball movement and play defense. 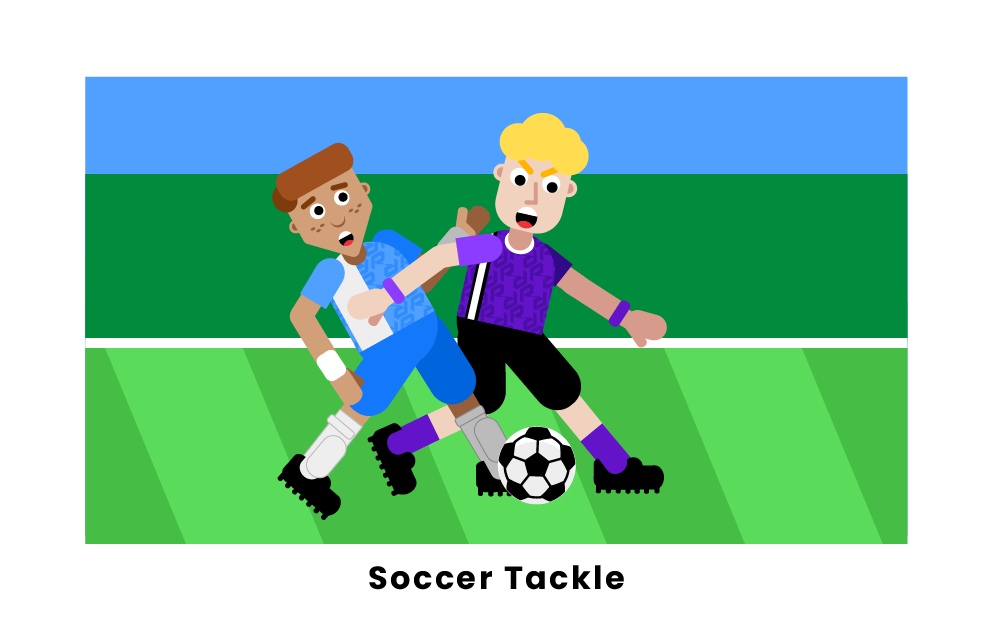 A tackle is when a player goes at an attacking player and successfully stops possession and ball movement without committing a foul. A defensive player is allowed to play the ball, making their best effort to get the ball without harming the attacking player. It is up to the official to determine if the action is a tackle or a foul. A successful tackle is also known as winning the ball from an opponent.

Usually, the best tacklers are defenders and defensive midfielders. Knowing when to go in for a tackle as opposed to cutting off an angle and waiting for the dribbler to make a bad touch is an instinct that skilled defenders develop over time. The risk of committing to tackle the ball away is that the defender might be caught flat-footed by a speedy attacker who can juke the ball around them.

It is very risky to attempt a tackle in the penalty box, because even the slightest mistake can draw a foul or penalty kick. In addition, the dribbler might try to "sell" a foul by flopping and convincing the official that a penalty is deserved. If the official notices this deception, they can caution the attacking player for diving.

Types of Tackles In Soccer

There are lots of tackle types in soccer that players can use in a game. However, players will be called for an illegal tackle if they break the rules of tackling. There are two major types of tackles, back tackles and slide tackles.

Back tackles: A tackle in which a defensive player comes from behind the player with the ball and takes the ball away from them.

Slide tackles: A tackle in which a defensive player slides on the grass to try and knock the ball away from the player with the ball to take back possession for their team.

The officials are responsible for judging whether a tackle is legal, and play can carry on, or illegal. An example of a reckless tackle is when a defender goes in to make a tackle with their studs up. This is highly dangerous and can lead to serious injury for the other player if the defender makes contact with the opposing player's body rather than the ball.

For a first offense, the referee might caution a player and give them a verbal warning. For a more reckless tackle, the foul can be punished with a yellow card or straight red card.