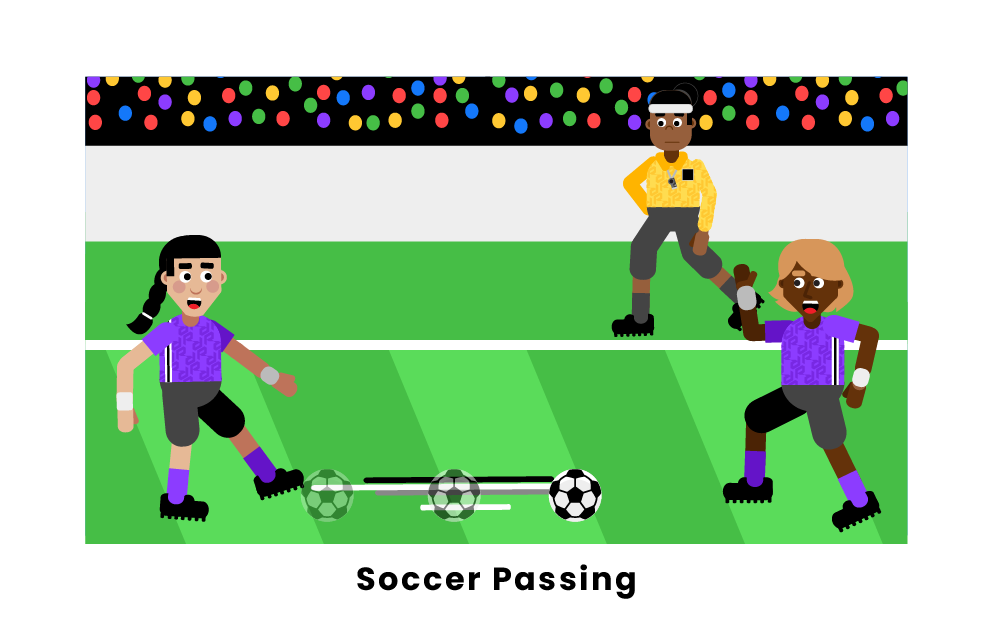 In soccer, a vital aspect of possession and ball movement is passing. A lot of ball movement comes from the players passing to one another, so let's learn all about passing.

A pass is when a player kicks the ball to another member of their team. Passes can also be executed with the head or chest if directed well but are most frequently made with a player’s feet. A pass is completed if the receiving player is able to control the ball enough to dribble or pass.

Why Is Passing Important in Soccer?

A ball kicked to a teammate can travel faster than a player running and dribbling the ball to the same spot. Passing allows a team to transfer the ball among different players and move it down the field, all while maintaining possession. Passing can help a teammate get out of a tight situation if they are surrounded by one or more defenders. Finally, passing to open space allows an offensive teammate to run onto the ball and maintain forward momentum.

Teams that pass the ball well are more likely to create scoring opportunities. For example, the great Spanish club FC Barcelona adopted a pass-first game that led them to dominate the European club tournaments. The FC Barcelona-style attack passes the ball so much during the game that players often only take one or two touches on the ball before finding an open teammate.

Often, players with superior passing abilities play the midfield position. A player that connects passes between the defense and attack is known as a linkman. To become a good passer, soccer players need to develop their field vision, ability to anticipate plays and move into space, and control of the ball to complete passes with the right amount of power.

There are many different pass types in soccer:

If a pass leads directly to a goal by the player that received the pass, it is referred to as an assist. Assists are recorded throughout the game and season to measure individual passing ability. While not as glamorous as goals, assists are an important part of a team’s ability to score.

Can a pass be offside if the player is behind you?

Players who are in an offside position and receive a pass backward are still considered offside. This may come as a surprise, given that the player in question is behind the player in possession of the ball, but the direction of a pass does not have any effect on the offside rule. Instead, offside violations are called based on the position of the receiving player at the time the pass is initiated.

What passes cannot be considered offside?

There are three unique scenarios where offsides are not applied. Those three scenarios are during corner kicks, goal kicks, or throw-ins. If the first player to receive the ball in one of these scenarios is in an offsides position, the referee will ignore it. It is important to know when offsides is not enabled to set up your defensive positioning accordingly.

What is a passing lane in soccer?

A passing lane is an area between two defenders where a player can pass the ball to a teammate. There are two types of passing lanes. The other form is known as a passing channel and is the area between a defender on the touchline. Being able to anticipate passing lanes and channels before they open can be the difference between an average and elite playmaker.