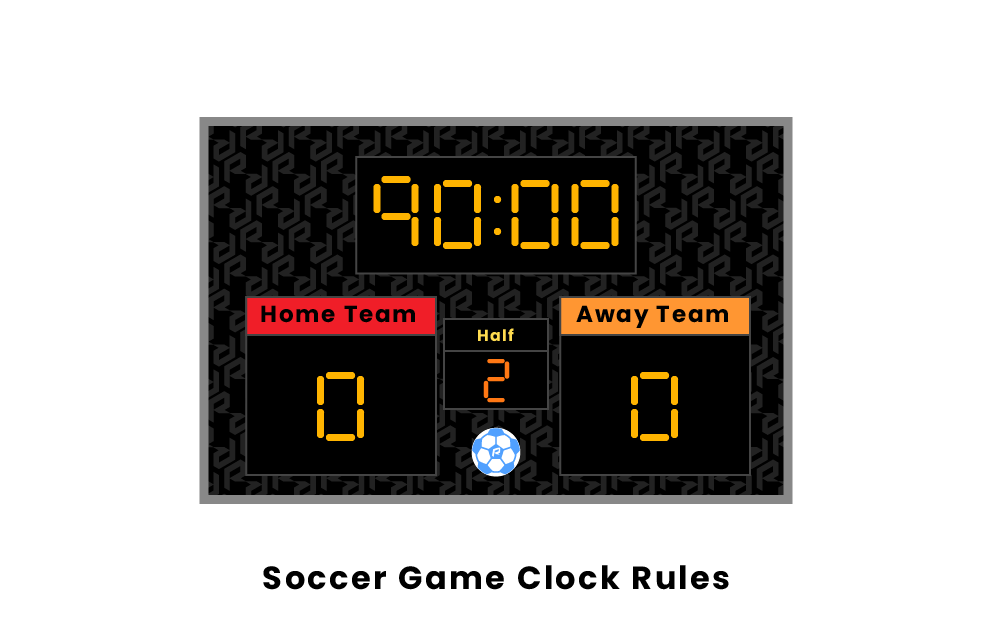 The soccer game clock is one of the most important aspects of gameplay. Always kept by the head official, the game clock keeps track of the time elapsed or time remaining in a match.

Soccer games have a clock that is constantly ticking, called the game clock. The game clock is the official device for keeping time in a soccer match. It is operated by the head referee and is often displayed in the stadium and on television broadcasts. In a standard soccer match, the game clock will start at zero and count up, stopping at halftime once 45 minutes are on the clock and resuming at the start of the second half. The clock continues to run throughout the second half until it reaches 90 minutes. Additional stoppage time is normally added at the end of each half. Stoppage time is added to the game clock to make up for time wasted during the half due to injuries, excessively long penalties, and substitutions.

Why Does a Soccer Time Clock Count Up?

The game clock counts up instead of down because it allows extra time to be added at the end to account for stoppages in play. This enables soccer to be supervised by the head referee, who keeps track of time while making calls on the field. It is easier for a referee to keep track of the time in a game if the clock counts up without pausing every time an event happens.

At the end of each half, the referees can determine added stoppage time at their discretion. If the clock counted down instead of up, extra time in the second half would cause the clock to go into negative numbers.

For soccer matches sanctioned under the NCAA governing body, the game clock ticks down from 45 minutes to zero, showing the time remaining in each half. This is the opposite of most professional soccer matches. In NCAA matches, the head referee is allowed to stop the game clock when a player is injured to the point that a coach or medical staff member must attend to them. Play is resumed once the player has been assessed and removed, and then the game clock starts ticking again.

Stoppage time in soccer is additional time added to the game clock by the referee at the end of each half. Stoppage time is added whenever there is a major stoppage in play, such as an injury, substitution, or discourse between officials and players. One of the referees, usually the sideline referee, will keep track of time wasted on a stopwatch. They will then communicate to the other officials how much time should be added to the half. In most levels of soccer, an average of one to five minutes of stoppage time will be added to the end of each half.

Extra time is soccer’s version of overtime that is used in elimination games to determine a winner if the score is tied. While most league and group stage games can end in a tie, knockout stage games need a clear winner.

Extra time consists of two 15-minute periods with a short break in between. Whoever has the higher score at the end of extra time will be declared the winner. If the teams are still tied after extra time, a penalty shootout will take place.

How does the clock work in soccer?

In soccer, the clock starts at zero and counts upward without stopping until the half is over. The clock stops at 45 minutes for a halftime break. After halftime, the clock counts upward continuously again until it reaches 90 minutes. At the end of each half, stoppage time is added for pauses in gameplay caused by injuries, substitution, and other delays.

Are there timeouts in soccer?

There are no timeouts in professional soccer. Teams can make substitutions during the game, but regulation time will not stop. The game clock will keep ticking even if the referee signals a stoppage of play for things like an injury, hazard on the pitch, or a medical issue. Additional playing time (called stoppage time) is added to the end of each half.

Why does the clock not stop in soccer?

The game clock in soccer does not stop in order to make it easier to officiate with only one referee. It is easier for a referee to keep track of time without having to repeatedly stop and start the clock. Instead, stoppage time is used to add time back on the clock at the end of the game.

What happens if a soccer game is tied after 90 minutes?

If a soccer game is tied at the end of regulation, it will typically end in a draw. If it is a knockout match as part of a tournament, extra time will be played to determine the winner. The two extra time periods each last 15 minutes, not including additional stoppage time. Penalty kicks are used as a last resort to determine the winner if the score is still tied at the end of extra time.