Contrary to other sports, soccer fields, also known as the pitch, can have differing dimensions within the confines of the rules. However, there are always the same components to each field. Read on to learn about the different parts of a soccer field and what each part contributes to a game of soccer. 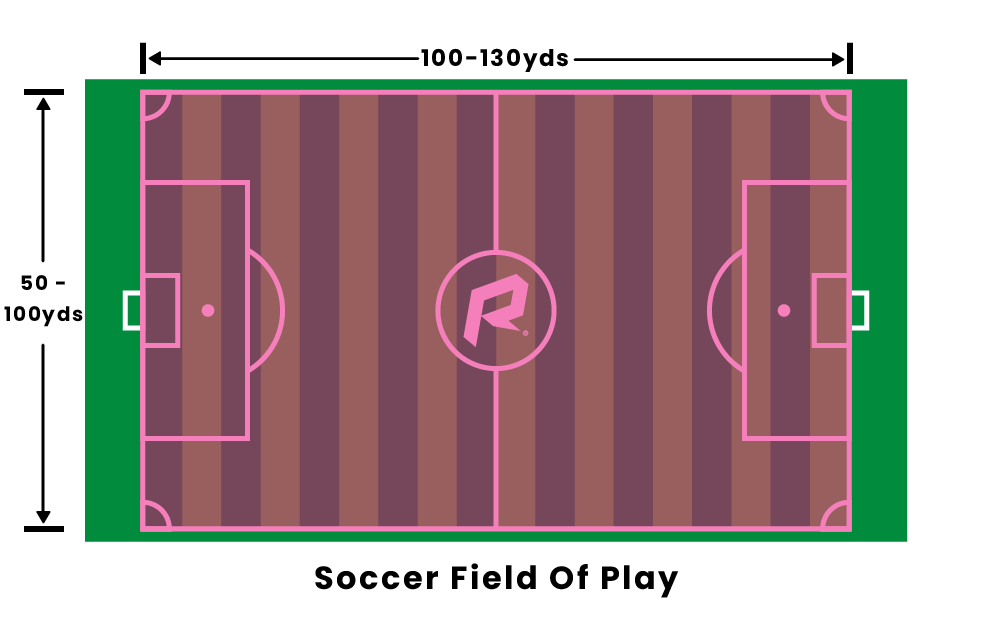 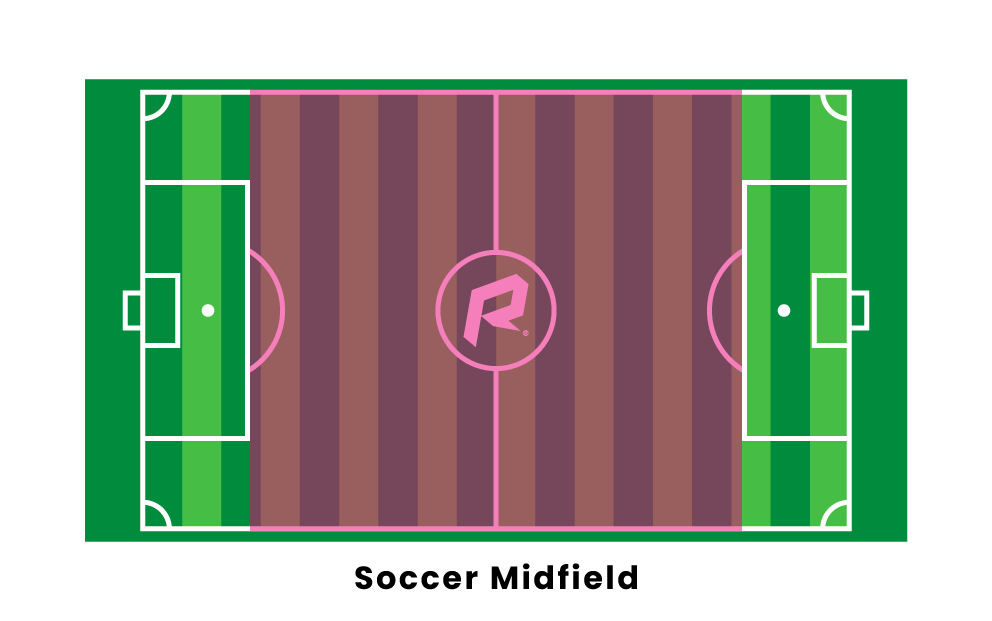 The area of the field surrounding the halfway line is known as midfield. Midfield is a highly contested area on the pitch. The team that controls the ball in midfield has a lot of options. They can pass back into the defensive third to a defender or pass into the attacking third to a striker or winger. 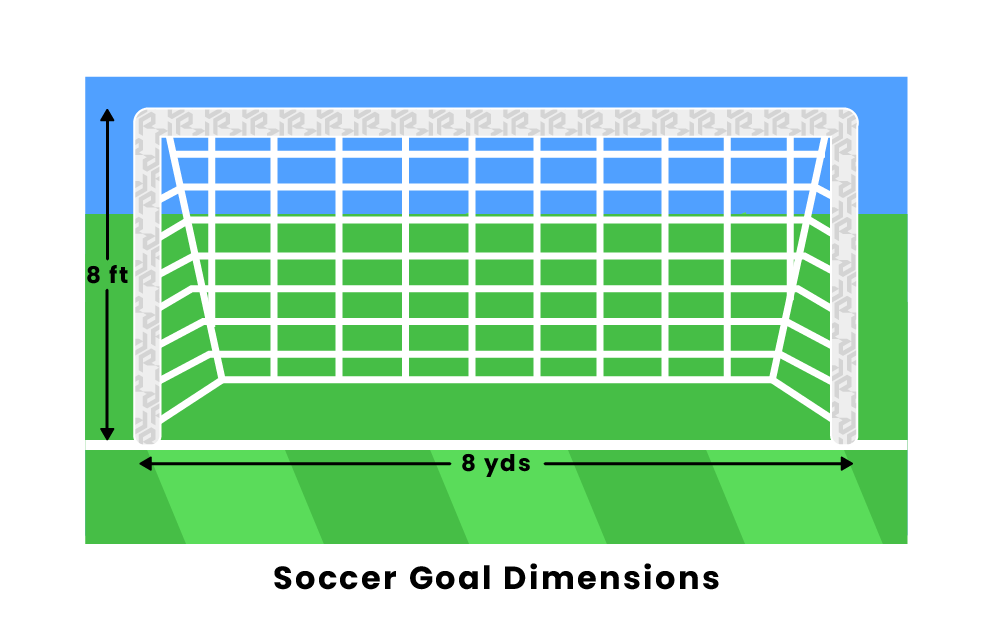 On both ends of the pitch is a goal, placed directly at the center of the goal lines. Players try to shoot the ball into the opposing team’s goal to score goals. The goals are made up of three main parts called the crossbar, two posts, and a net. Professional goals are 8 yards (24 feet) wide and 8 feet tall, while younger levels can have smaller goals. All goals are attached to the ground with metal pegs.

There is a vertical bar called the crossbar that spans the width of the goal connecting both posts. The crossbar must be made of a solid material, so that a soccer ball can bounce off of it. The crossbar is 2.44 m (8 ft) up in the air above the ground. Any ball that is played off the crossbar is still in play as long as it stays within the boundary lines.

There are two vertical support posts that keep the crossbar suspended in the air called goal posts. Together, the crossbar and goal posts form the frame of the goal. According to FIFA, the posts are white in color and have the same width of the crossbar of 12 cm (5 inches). The distance between both the posts are 7.32 m (8 yds). A ball that is kicked or played off the goal posts but remains in bounds is in play, just like the crossbar.

The net of the goal is secured to the crossbar and posts to create the full goal. The net catches any balls that pass the crossbar and posts, and makes it easy to determine whether or not the ball has entered the goal. In many professional stadiums, this net will be strung up to form a box. It is important that the net does not fall down and impede the keeper from doing their job.

The Center Mark or Center Spot 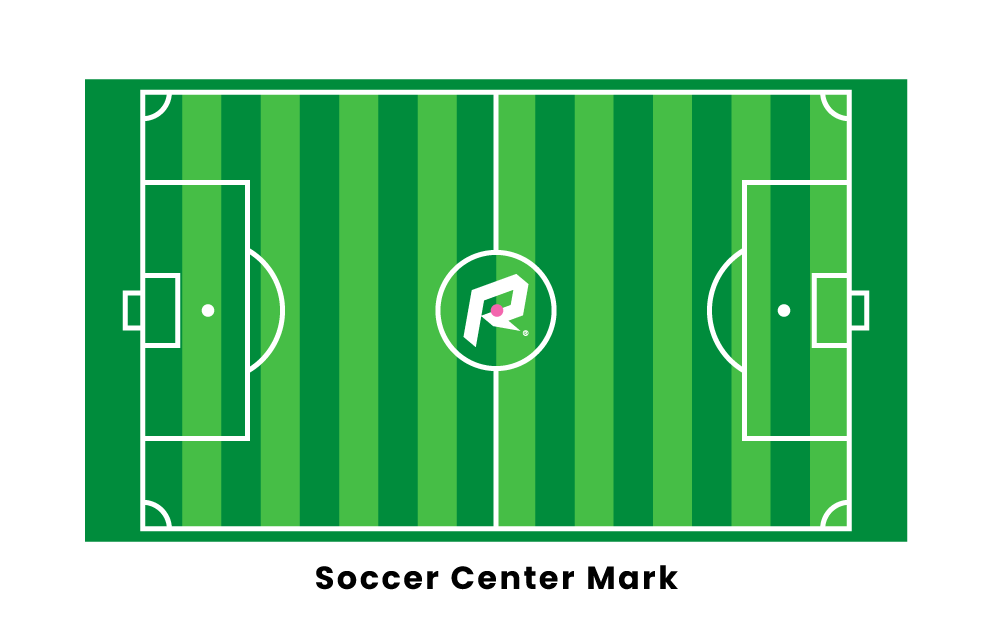 The center mark, also known as the center spot, is a marking made at the exact center point of the pitch. It is used for kickoffs to designate where the ball will be placed at the start of each half and after a goal is scored. 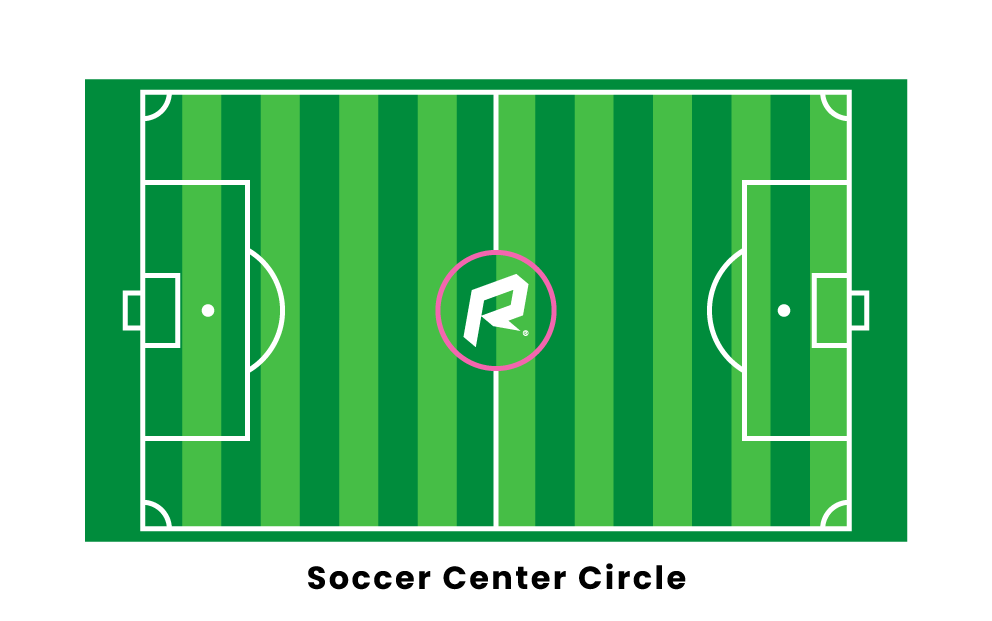 The center circle is the circle placed in the middle of the pitch, divided by the halfway line with the center mark in the center. The circle has a diameter of ten yards. On a kickoff, all players from the opposite team of the team kicking off must remain outside of the circle until the ball is touched. 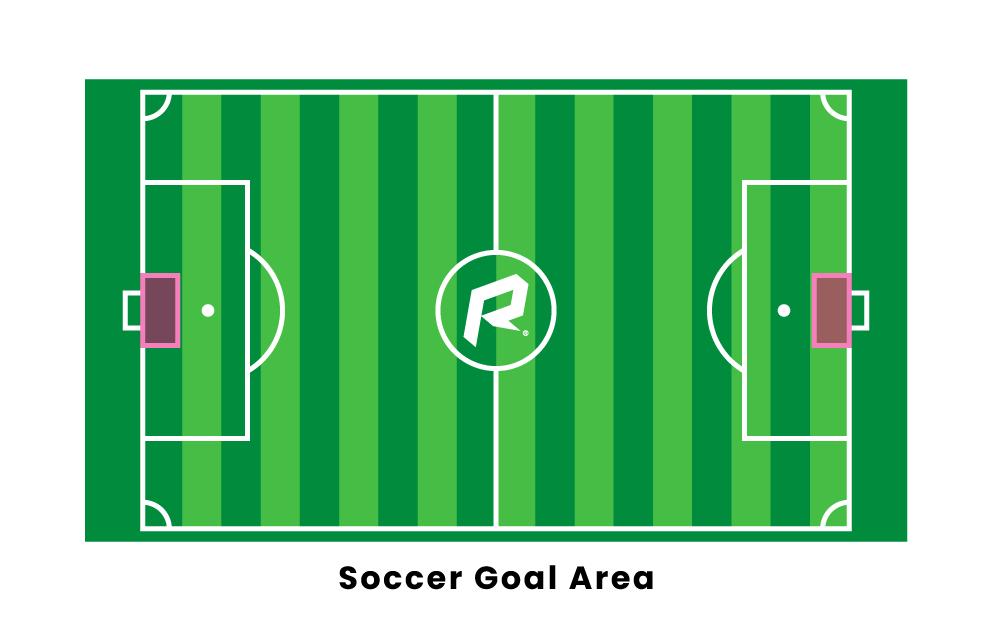 The goal area is a smaller box located on both ends of the pitch, inside of the penalty area. It designates where a goalie may kick a soccer ball from back into play when it goes out-of-bounds beyond the endline by the team on offense. The goal box line is 6 yards from the goal and 20 yards wide across it. 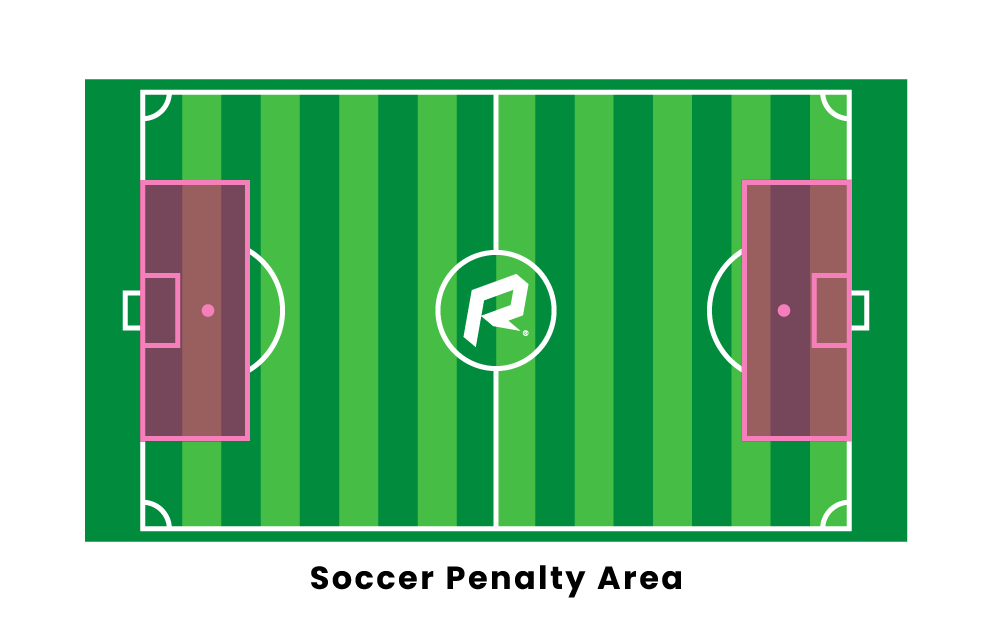 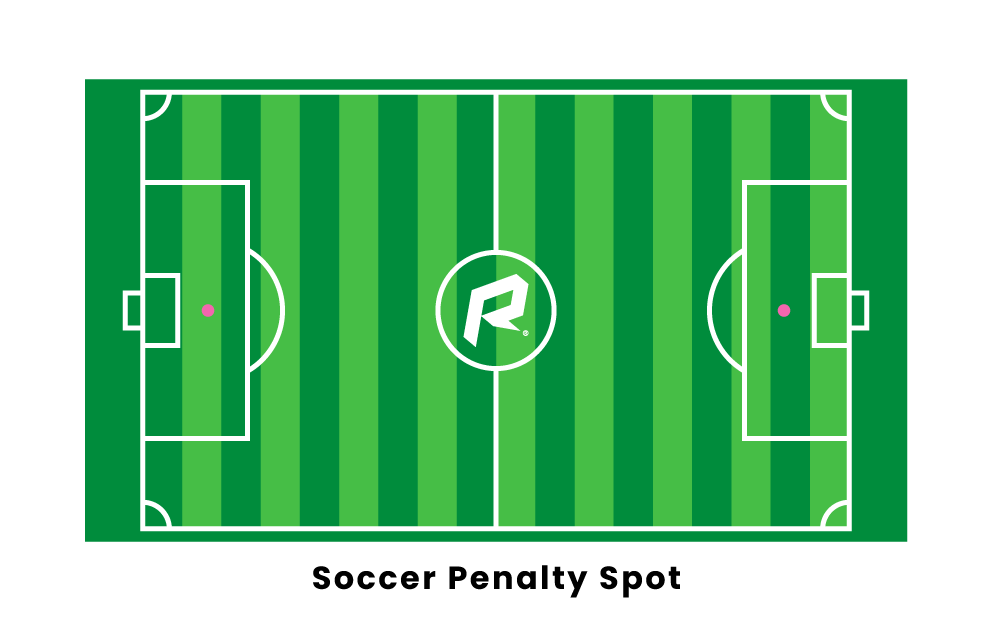 The penalty spot is a small marking inside of the penalty area placed 11 m (12 yards) away from the center of the goal line. If a player is awarded a penalty kick, the ball is placed on that mark for the kick. 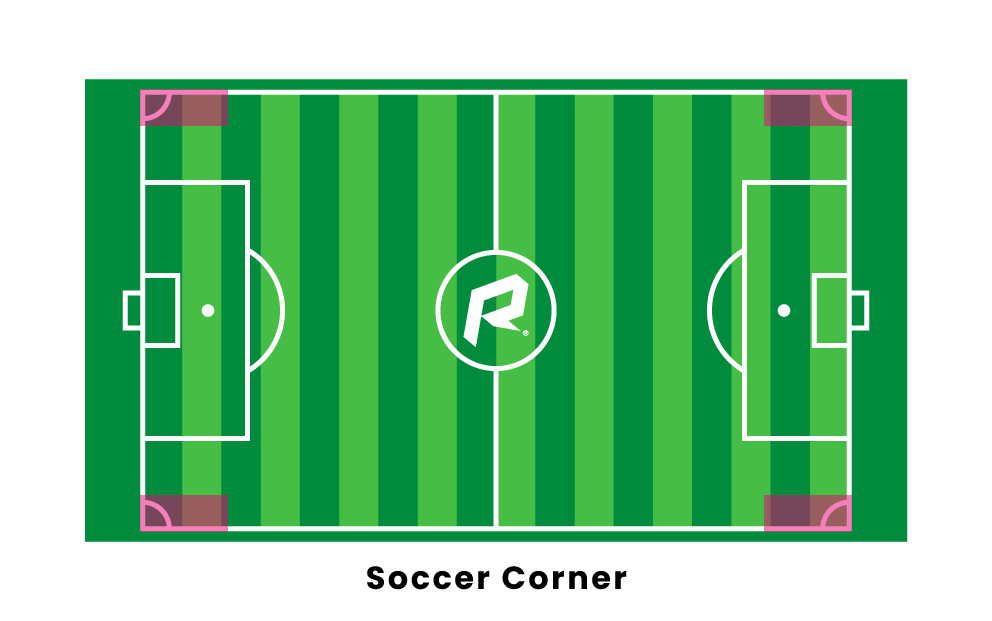 The corners of the soccer field are an important location to know. All corner kicks happen at the corner arcs. The corners are surrounded by both boundary lines, so if you're playing defense this is a great spot to keep the offensive player with the ball. If you have the ball in a corner in the attacking third, you should try and cross the ball to a teammate in the middle for an open shot. 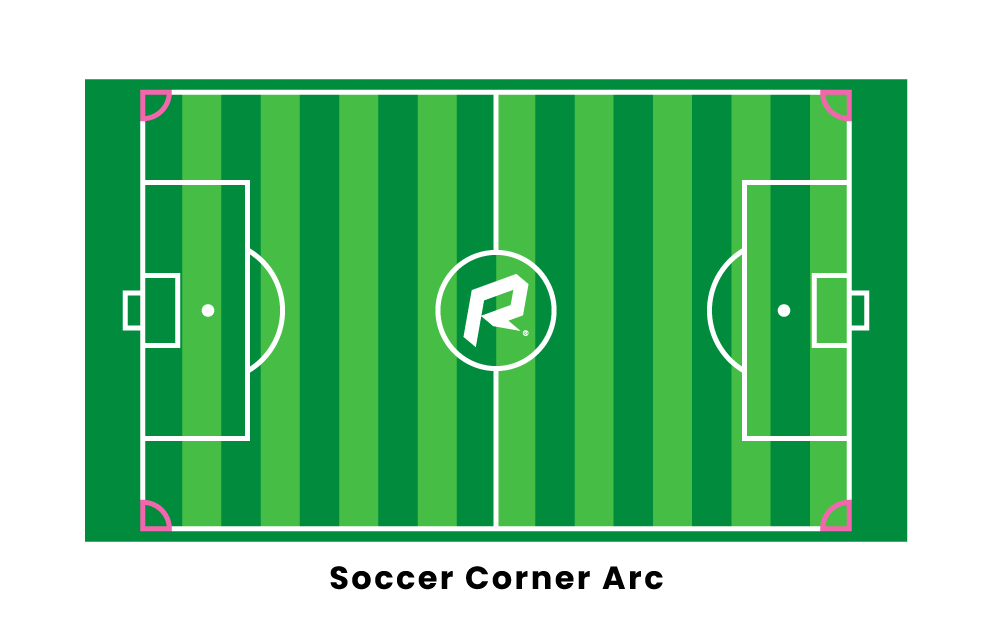 There are four quarter-circle corner arcs placed at each corner of the pitch. While the exact size will vary based on professional level and pitch size, they are most often 1 yard in diameter. The corner arc is used as a guide for corner kicks. When a corner kick is awarded, the ball must be placed somewhere along the arc for the kick to be legal.

At each of the four corners is a flag placed where the end lines and touchlines meet. The corner flags serve as indicators to referees and players about the boundaries of the pitch and when the ball is inbounds and goes out of bounds. Their bright coloring and size make it easy for referees to spot them from afar in scenarios where the ball goes out of bounds. 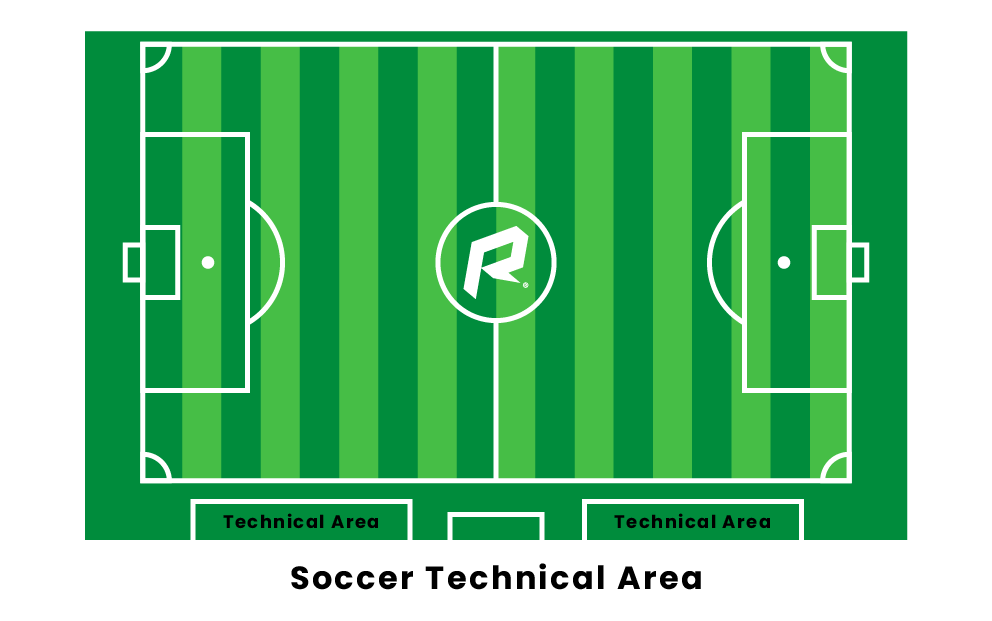 Most pitches will have some sideline space known as the technical area for players to warm up before being substituted into the game. The sideline space is also for coaches (managers) to walk around and communicate with their players during matches. The coach must stay in their respective technical area throughout the game and can be punished for leaving it to communicate with referees and players.

What are soccer fields made of?

What is the equipment placed at the corner of a soccer field?

The piece of equipment placed at the corner of a soccer field is known as a corner flag. The main purpose of these flags is to help officials determine whether the ball crossed over the touchline or goal line. Seeing which side of the flag the ball passes makes it much easier to visualize. Also, the flags help indicate wind direction, which can be useful for corner kicks. It is important to note that the flags are considered a part of the field, so a ball that hits the flag and remains inside of the lines is still considered in play.

How are the three areas of a soccer field divided?