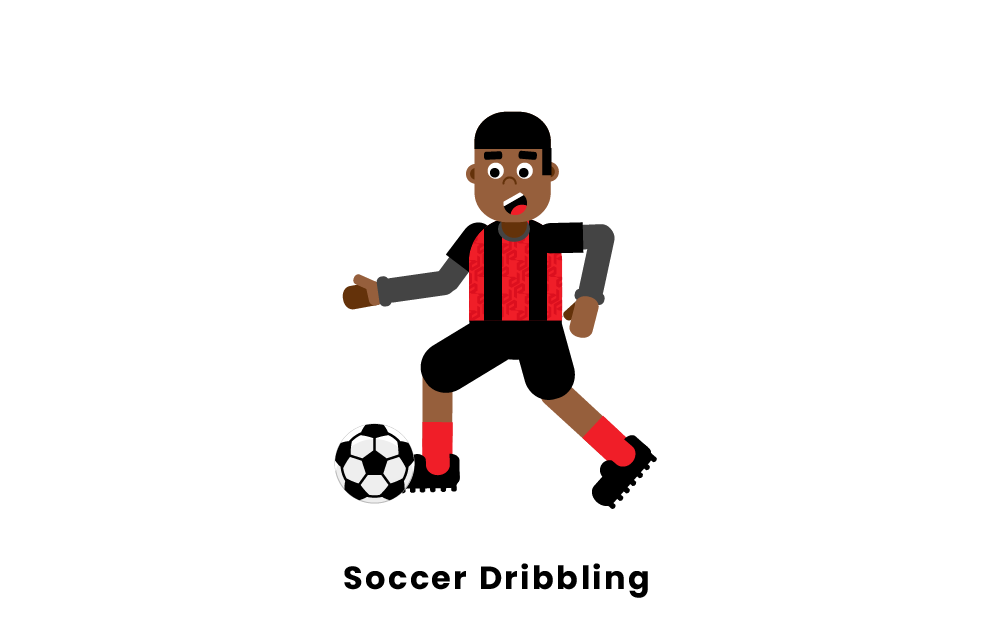 Maintaining possession of the soccer ball while on offense and keeping the ball away from the defense is achieved by two key actions - passing and dribbling. While passing relies on successful coordination and teamwork between two or more players, dribbling is an individual player action. Read on to learn the basics of dribbling and understand when it is used most often in the game.

Dribbling is the action of an individual player, the dribbler or ball carrier, controlling the ball at their feet. Skillful dribblers use all parts of their feet to bring movement to an otherwise dead ball at rest - the instep, top of the foot, bottom of the foot, back heel or outside of the foot. Dribbling is most often seen in a one on one situation, with an attacker dribbling towards his defender and aiming to beat his defender with a quick move or cut.

Dribbling well is as much about body and head fakes as it is about fancy feet. The dribbler uses their body to keep balance while running and dribbling the ball. Head and body fakes work to confuse the defender. When an offensive player beats their defender one on one with crafty dribbling moves, the crowd in support of the offensive team reacts with cheers.

Dribbling is more frequently used in the offensive half. It becomes more difficult to dribble in high traffic areas, such as a crowded goal box. In tight spaces, dribblers must keep the ball close, almost as if it were Velcroed to their feet. In areas with more open space, such as the corner areas or wing areas, dribblers can take bigger touches, pushing the ball out farther ahead while still maintaining possession. Goalkeepers and defenders usually dribble the ball less, to avoid losing possession so deep in their own half of the field.

At the elite level, scoring opportunities are more likely to be created by strong passing and off-ball movement rather than dribbling. A forward pass advances the ball faster than an individual player who is running and dribbling. While an individual player squares up to take on a defender by dribbling during a fast break, for example, the defense has more time to recover and fall in toward their goal. It is easier for a defender to take the ball away from the opposing team when the attack is overly reliant on dribbling.

Here are some common terms you’ll hear related to dribbling:

How do I get better at dribbling in soccer?

To be an elite dribbler in soccer, you must practice basic techniques constantly. Basic techniques include being gentle with the ball, keeping the ball close to you, and consistent foot-eye coordination. Practicing these techniques will help you to become a better dribbler and to attempt more complicated moves.

What is dribbling in soccer?

In soccer, dribbling is the action of an individual player controlling the ball at their feet. Dribblers move the ball back and forth with their feet as they move up and down the soccer pitch. Players typically run and dribble the ball in between passes to their fellow teammates. Dribbling is very important for lower level athletes and slightly less important for professionals focused on passing and off-ball movements.