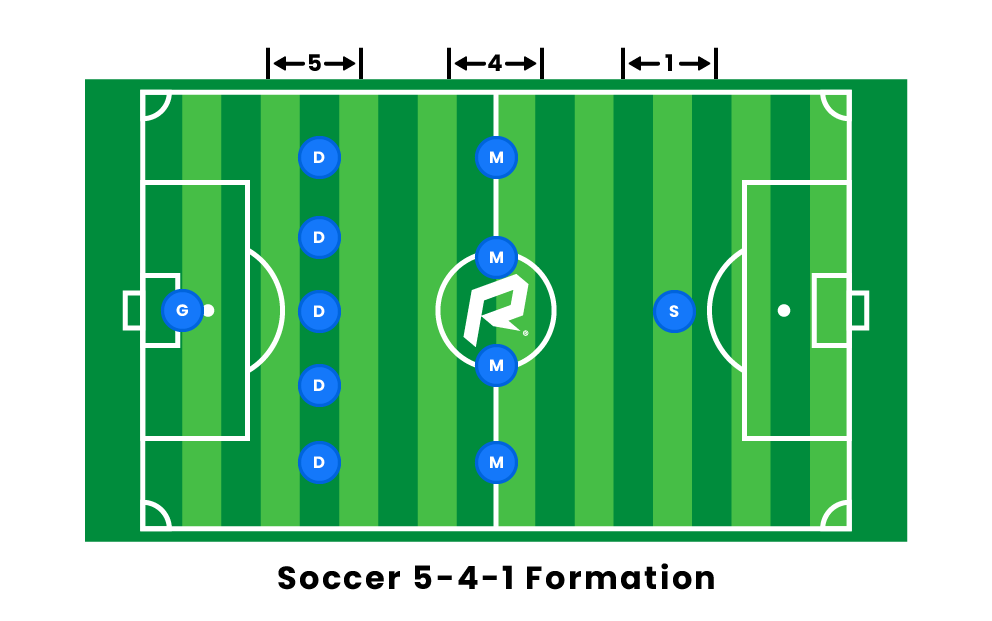 Before a soccer game, every coach has to decide how they want their players to position themselves on the field. Each formation has its own objection, advantages, and disadvantages, including the 5-4-1 formation.

A 5-4-1 formation is a defensive formation in soccer with five backs, four midfielders and one striker. This is a formation that relies on the five defenders to stop any attacks from the other team’s offense. If a team is overmatched or simply looking to tie a game, they may consider this formation as a more effective way of preventing goals from being scored.

The 5-4-1 consists of many different specialized positions, and each plays a crucial role in the formation. Read on to learn about the strategy associated with each position in the 5-4-1.

The lone striker at the top of the 5-4-1 formation is responsible for maintaining constant pressure on the opposing defenders and creating scoring opportunities. While they are technically the only forward, they will be supported by the attacking and center midfielders. Strikers should always be ready for their teams counter attack, and receive build-up passes from midfielders and wing-backs.

In a typical 5-4-1 formation, there will be three different types of midfielders. The 5-4-1 midfield line consists of two center midfielders, one defensive midfielder, and one attacking midfielder. Since there are so many midfielders, this formation heavily relies upon passing near the middle of the field. Midfielders should always be pressuring attackers from the opposition and making passes to the striker. They can also pass to the wing-backs to create a bit more width if need be.

One of the most striking features of this formation is its 5 defensive backs. These are typically separated into a defensive line made of 3 center-backs and 2 wing-backs. It is nearly impossible for an offense to break through such a large number of defenders in the backfield. This makes the 5-4-1 an extremely defensive formation.

With five defenders protecting the goal, it is very challenging for the offense to get a ball past them. Coaches with very strong defenders should consider this formation because it is unlikely that the other team will pose a threat against a five player defense, not to mention the pressure put on by the midfielders when they’re playing defense, too.

The 5-4-1 formation is also excellent for midfield counterattacks. With such a stacked midfield, the wing defensive backs can sprint up the field and offensively shift the formation into more of a 3-4-3 situation. This retains good defense while allowing for room to attempt a goal.

Like many formations with a heavy defensive line (and a heavy midfield line too), this formation’s players can often get pushed back so far that they play minimal roles in aiding the offense. The lone striker can especially get left alone to be overwhelmed by their opponent’s forwards.

While your defenders are easily preventing goals from being scored, your team is most likely not going to have a lot of offensive players in scoring positions because they are all pushed back on defense. This formation could be a challenge for switching into  successful offensive maneuvers.

Is a 5-4-1 considered a defensive or offensive soccer formation?

In soccer, the 5-4-1 is considered to be a heavily defensive formation. Due to the nature of this formation, half of the team will be defensive backs. Also, only having one forward creates limited opportunities for the offense to get quality scoring chances. This formation is primarily used when a team’s main goal is to prevent the other team from scoring.

There are a few different formations that feature five defenders, most notably the 5-4-1, the 5-3-2, and the 5-2-3. Each of these formations is hyper-focused on defense, however they vary in their devotion to “park the bus” style defense. The 5-4-1 is the most defensive formation with five defenders, while the 5-2-3 features the least focus on offense.

5-4-1 formations are best used when a team has the lead and is looking to silence the opposing team’s offense. The 5-4-1 formation is not conducive to scoring, so trying to use it in a scenario where your team needs goals to win would prove highly detrimental to your odds of winning.