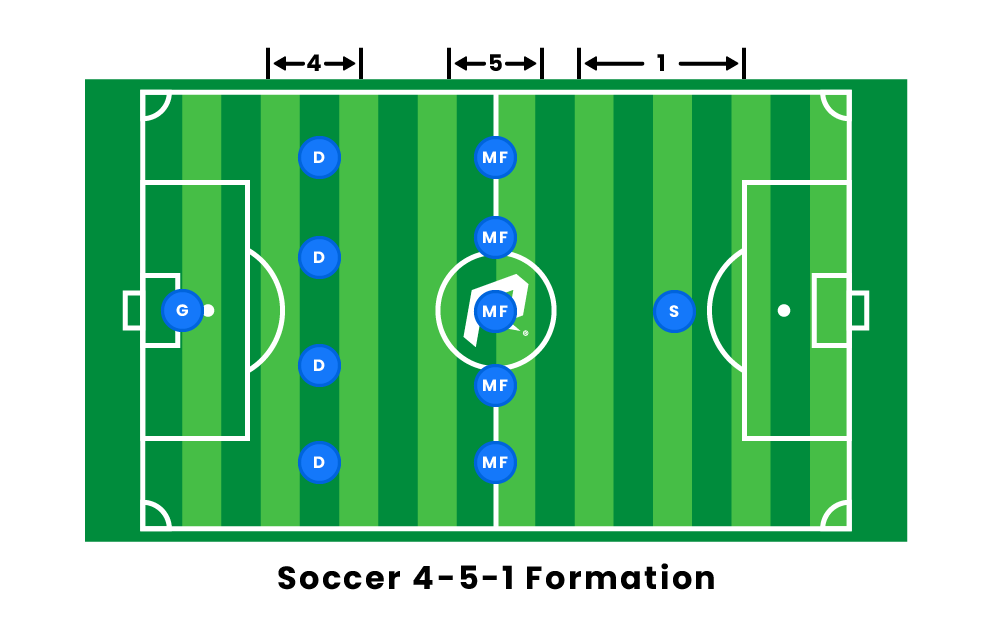 A 4-5-1 formation is a shape in soccer with four defenders, five midfielders, and one striker. This formation is similar in shape to a 4-3-3 formation and is often favored by professional European teams and managers. Read on to learn why this is the case, and what shortcomings the formation has to offer as well.

The 4-5-1 is a defensive formation in soccer that focuses on preventing opposing scoring chances and promotes strong counter attacks. When playing in the 4-5-1, it is important that each position knows their role on the pitch.

The lone forward is responsible for generating most of the offense in a 4-5-1. Thus, the 4-5-1 is typically used by teams that have a superstar striker that is capable of handling a heavy burden on the offensive end of the field. However, the forward must also be aware of what is happening on the defensive end of the pitch, as counter attack opportunities will present themselves and forwards need to be able to read the situation quickly to take advantage.

The three central midfielders in a 4-5-1 formation are responsible for breaking up the opposing offensive press and feeding the ball upfield to the forward. They play more defensively than the forward, and are most importantly in charge of breaking up passes made by the opposing team.

The two midfielders who play on the wing, or wingers, are responsible for closing off passing and running lanes available to the opposition and assisting the forward. While they play a bit more on the offensive side of the ball, wingers are still responsible for helping out the defensive midfielders and backs.

The center and three outside backs in a 4-5-1 formation are the core of the defense. They typically do not contribute at all on the offensive side of the pitch, and rather focus completely on defending. Backs will be assisted by the midfielders on the defensive end.

The 4-5-1 puts one player in scoring position with five supporting players behind them. This means that there is a lot of backup if the striker gets tied up with a defender. The midfielders also span the entirety of the field, meaning that a quick pass across the field can restart the play if need be.

This is an especially great formation for a very strong defensive line with midfielders who are talented ball handlers. This way, they can view the field at a glance and always know where the striker is positioned. It allows for quick and direct balls forward while relying on midfielder power when the striker pushes too far ahead.

This formation also lends itself well to counterattacks, using its defensive presence to acquire possession of the ball and then promptly attack with its stacked midfield. The forward also usually will be so far down the field in this formation that the midfielders can easily pass to someone already quite near the opposing team’s goal.

The main disadvantage to the 4-5-1 formation is how lopsided it is. Since there is one striker, there is a lot of pressure on this player to stand out and score goals. Midfield wingers often forget that they must play defensive positions as well. Sometimes, they can get so wrapped up in their offensive work that they leave gaps open on the two sidelines because they didn’t recover and get back on defense. This can prove detrimental to the overall defensive focus of this formation.

Is a 4-5-1 considered a defensive or offensive soccer formation?

A 4-5-1 formation is considered to be a defensive formation in soccer. This formation is commonly used when a team is trying to hold a lead or prevent the other team from scoring. Crowding the midfield with five players causes there to be little room for the opposing team to create attacks. Also, having only one striker makes it more difficult for the offense to create scoring opportunities.

A 4-5-1 formation in soccer is a highly popular formation that utilizes one striker up top, five midfielders with various roles depending on their position within the line, and four defensive players on the back line. This formation is highly prevalent amongst pro teams, particularly within Europe’s major leagues. It is not particularly well-liked amongst fans because of its defensive nature, but it has proved effective in the past.

While not as defensive as other formations, such as the 4-3-3 or 5-4-1, the 4-5-1 should primarily be used to prevent the opposing team from scoring. While having five midfielders does provide more opportunities for counter attacks than other defensive positions, the primary purpose of this formation is to prevent the opposing team from successfully passing.