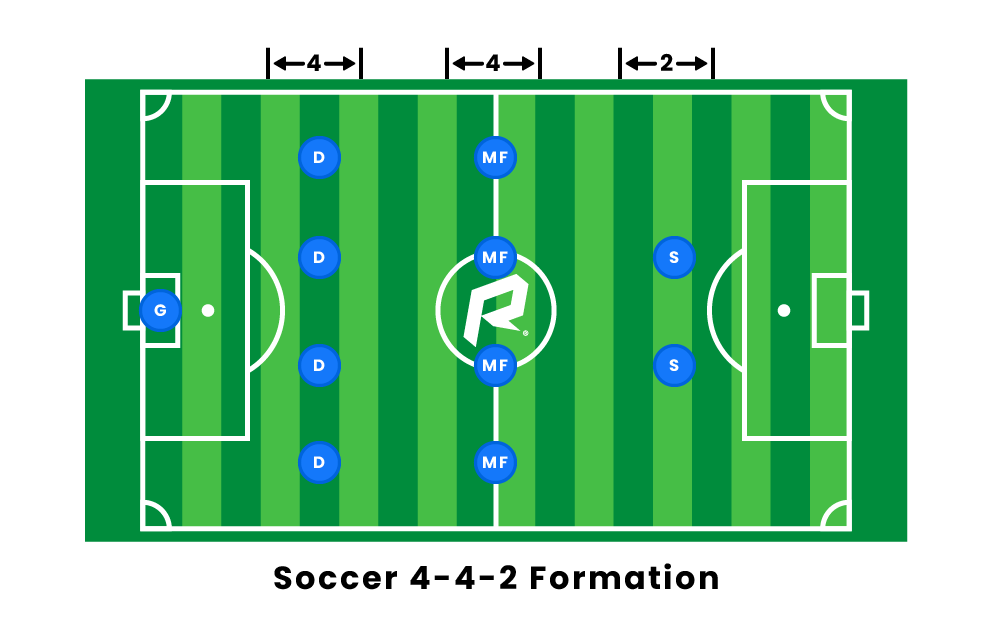 A 4-4-2 formation is a shape strategy in soccer with four defenders, four midfielders, and two strikers. It is quite similar to the 4-4-1-1 formation in terms of positioning and strengths. Read on to learn more about the 4-4-2 formation.

The two strikers are the main offensive players for this formation. Similar to the 4-4-1-1, they are the primary playmakers, as they can set each other up for shots on goal. It is common for a 4-4-1-1 to switch into a 4-4-2 if the strikers are going to set up a particular play for a shot on goal.

The most important offensive aspect of the 4-4-2 formation is its two strikers. Since the formation has such a strong and malleable midfield presence, the two players nearest the opposing team’s goal can push aggressively far because two of the midfielders can help protect the zones that would normally be covered by typical forwards.

The biggest pro of the 4-4-2 formation is its simplicity. The structure of the formation separates players on each zone of the field into clear roles that are easy to follow. The defensive backs guard the goal and wait for the offense to make moves in each area, the midfielders switch back and forth based on the team’s needs, and the strikers push the ball as forward as they can. There’s no need for specialized skills here, just the bare essentials of each basic player type.

Another large pro of the 4-4-2 formation is its defensive potential. With this formation, there are eight players who could be deemed as defenders if the situation warrants it. With a number that high, there is a very good chance that the team would be able to steal the ball back from the offense and change the direction of play within seconds.

The major con of the 4-4-2 formation is its lack of versatility. Even though its player structure is so simple and can be played by anyone, regardless of specialization, there’s also very little chance of surprising the opposing team. Each player’s role in the 4-4-2 is so clear and simple that other teams can predict certain actions and make moves that give themselves a complex or surprising advantage.

Playing with two strikers can also be a risky choice if the other team’s defenders are strong. The two strikers have to be quick on their feet and see the field with one glance and know where the open gaps for passes will be. There is no reason why the two strikers won’t be able to get past the defenders, but they just have to know their half of the field very well.

The only variations of the 4-4-2 formation involve reconfiguring the midfielders and forwards. Since this formation has such a large midfield presence, these players can be split into two wingers and two central midfielders but you can also send one or two midfielders back to strengthen the defensive line. The strikers can also occasionally separate into a forward and a striker role as they are in the 4-4-1-1 formation if the team does not want to attack from both sides.

Yes, the 4-4-2 is often considered a defensive formation. This is because it has a strong defensive line of four but also has a large midfield presence that can be converted at any time to a defense made up of eight total players. While the strikers, aided by the midfield, can certainly make a nice offensive push, the 4-4-2 has much more defensive potential.

What are the positions in a 4-4-2 formation?