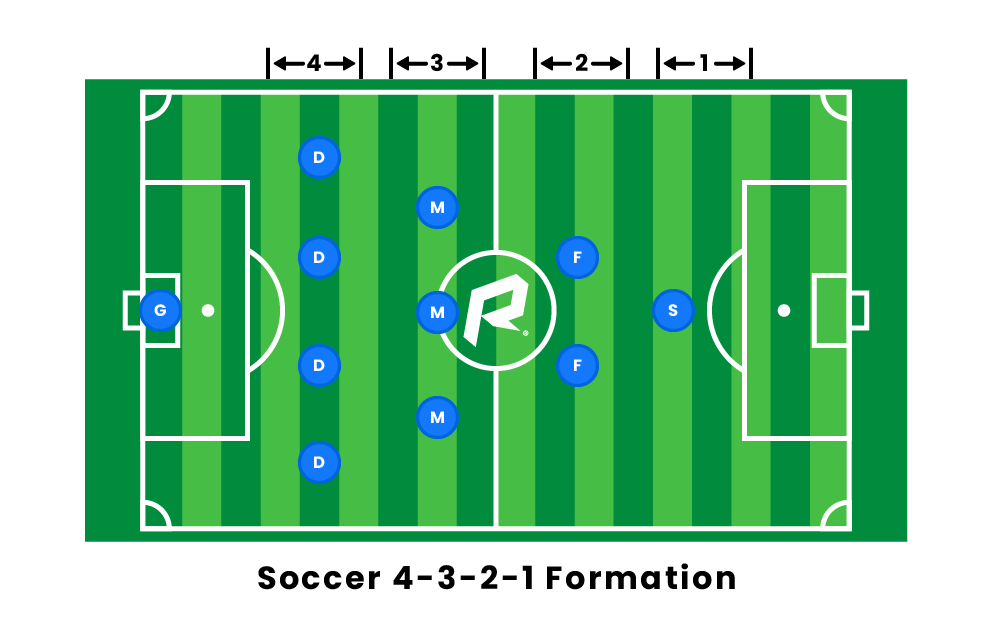 The 4-3-2-1 formation in soccer is a team formation that consists of four defenders, three defensive midfielders, two forwards, and one striker. This formation is very common and often referred to as the “Christmas Tree Formation” due to its structure.

The four defenders make up the largest part of the 4-3-2-1 formation’s structure and operate as the backbone of the team. The main role of the four defenders in this formation is to shut down all of their opponent’s passing lanes and to keep all opponents out of the penalty area. The defenders are the last players that their opponents have to pass before getting an opportunity to shoot on goal. However, they have some assistance.

The two forwards are also known as the wingers, and are often scorers and work directly with the center striker. Wingers should have strong kicking abilities and endurance because oftentimes, wingers can score on breakaways or in 2-on-1 situations. Wingers can also be replaced with attacking midfielders, who can still serve an offensive role but are better at distributing the ball.

Lastly, the lone striker is like the leader of the offensive line. The striker should have great footwork and speed to keep up with the wingers. The wingers typically cross the ball in so the center striker can finish off the shot on goal.

With this kind of formation, quick passes are a must, because you will always be near a teammate. There are a lot of passing and scoring opportunities between the center striker and the wingers.

Also, having five midfielders (two central attacking midfielders, or CAMs, instead of wingers) separated in two areas of the field allows a team to have excellent ball control. They can congest the middle of the field and quickly stop an opponent’s attack.

Due to the formation getting smaller and smaller as you move upfield, it can be a little crowded near the midfield line. This could result in players getting too crammed-up and not examining their passing options across the field. Also, the narrow nature of this formation can allow for the opposition to have plenty of room near the sidelines to create an attack.

Another disadvantage of the 4-3-2-1 formation is the small number of forwards it utilizes. As the striker is the only true attacker in this formation, there is naturally a lot of pressure on them to convert opportunities. While wingers and attacking midfielders can help create these opportunities, they often have other responsibilities to worry about. 4-3-2-1 formations are particularly vulnerable against teams with strong wingers, as the formation only devotes one player to defending each wing.

A 4-3-2-1 formation in soccer is a formation that features four defenders, three defensive midfielders, two forwards, and one striker. This formation is particularly well equipped for counterattacks due to the presence of five players over the entirety of the midfield in the form of center defensive midfielders and two center attacking midfielders. However, this packed midfield can also prove to be something of a disadvantage due to the crowding effect it has on the midfield. This can congest passing lanes and draw in too many defenders to conduct an effective attack.

Is a 4-3-2-1 considered a defensive or offensive soccer formation?

While the 4-3-2-1 is considered a relatively well-balanced formation, it is considered to have a slight defensive preference. The large number of players in the midfield, along with four defensive backs, makes ball control and defense a high priority. Also, having only one true striker with only a few players to assist them can make it slightly difficult to find scoring opportunities.

The 4-3-2-1 formation is more or less extinct in professional soccer today. This lack of use is largely due to the limitations the formation places on counterattacking. Pro soccer clubs today feature a fast-paced offense with a focus on counterattacking, and this formation lacks defensive capabilities on the outside of the field. A weak outside presence leaves the team using the 4-3-2-1 formation vulnerable to this style of play. The lack of purely offensive-minded players also prevents the team using this formation from scoring as rapidly.