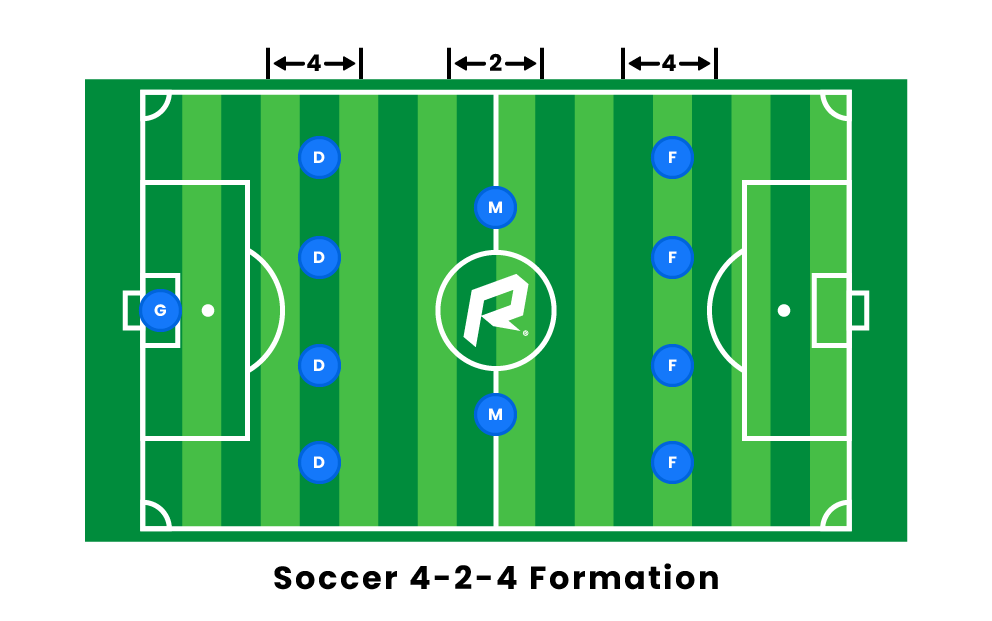 A 4-2-4 formation in soccer is an offensive formation with four defensive backs, two midfielders, and four forwards. This is one of the oldest formations you may see in a soccer match, dating back to 1950s Brazil, though it is not used as often as it once was. Read below for strategies surrounding the 4-2-4 formation and its several advantages and disadvantages.

A coach may use this formation when he has a very strong group of forwards and defenders. Since there are only two midfielders, the forwards are responsible for maintaining possession up the field, while the four defenders are working to keep the ball out of their side of the field.

There are four forward positions in a 4-2-4. The forwards are typically split up into two strikers that play in the middle and two wings that play on either side of the strikers.

The strikers must get to open areas to receive crosses from the wings. They also must have a hard and accurate shot, as most scoring opportunities come from the middle in the 4-2-4.

The two wings will play a bit higher up than the strikers, and will be the primary offensive playmakers in a 4-2-4. This means that the wings must be speedy and excellent passers, as they will be tasked with getting to open space and crossing the ball into the middle.

The four defensive backs in a 4-2-4 are the last line of defense before the goalie. They have a bit of a heavier burden compared to other formations, as there are only two midfielders providing defensive support. Both center backs will make tackling and pressuring center forwards their main priority. The outside backs will also provide defensive support and make sure to not get caught too far up the wings.

Many formations lean toward having only three forwards, with two wingers and a center fielder. However, with an extra player in the center on the offensive line, this means there is another person to make passes to the wingers for a shooting opportunity.

Having four forwards obviously helps put more pressure on the opponent and create more scoring chances, but having four defenders also is a key advantage to the 4-2-4. Unlike other formations where the outside backs may play a large role in the offensive build up, defenders in the 4-2-4 concentrate on containing and tackling attackers. This focus on the defensive side of the field helps prevent goals against.

The main disadvantage to the 4-2-4 formation is that it lacks balance. By relying so much on intense attack or defense, the midfield is left too exposed. The two central midfielders can be easily outnumbered by a more stacked midfield, such as in the popular 4-3-3 formation, and thus possession of the ball is lost. Once it became clear how easily a 4-2-4 formation lended itself to a midfield counterattack, it dropped in popularity. This weakness is likely why the 4-2-4 formation is rarely used in contemporary professional play.

Even though the 4-2-4 formation is one of the oldest formations in modern soccer, there are not many known variations. This is likely due to its well-known weaknesses and replacement in popular use by the 4-3-3 formation. Despite this fact, the 4-2-4 formation and its grouping logic led to the rise of the much more stable 4-4-2 formation as well as the popular 4-2-2-2 formation.

What are the positions in a 4-2-4 formation?

A 4-2-4 formation features four defensive backs (two center backs and two outside backs), two midfielders, and four forwards (two strikers and two wings). This is the most common distribution of positions in the 4-2-4 formation, but there are also variations that feature a different makeup of positions. However, a 4-2-4 always features the four defenders, two midfielders, and four forwards.

What are the advantages of a 4-2-4 formation?