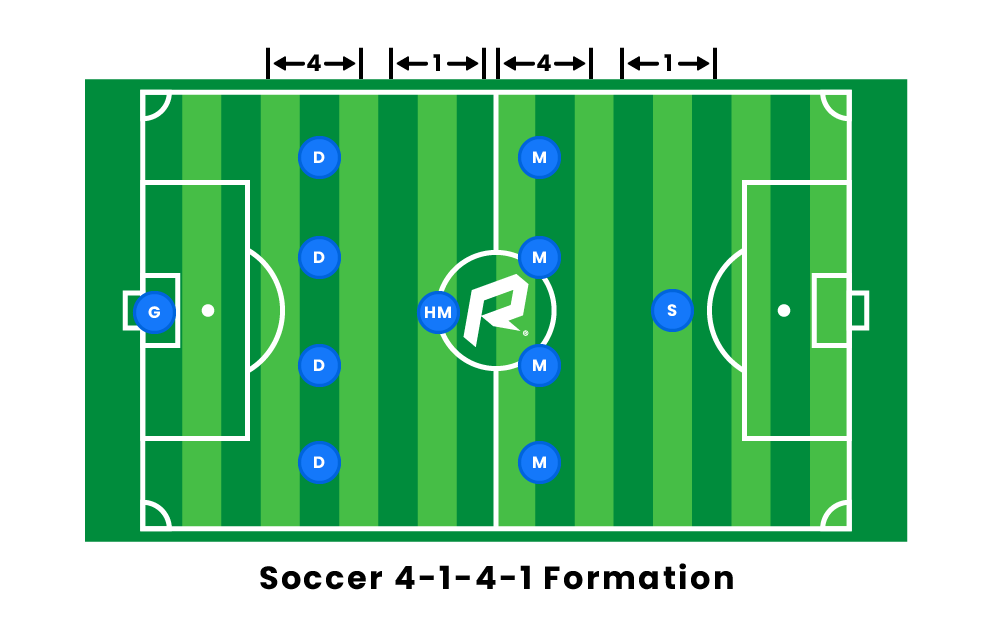 A 4-1-4-1 formation in soccer is a shape strategy with four defensive backs, one holding midfielder, four attacking midfielders and one striker. This play is a deviation from the 4-4-2 formation and is evenly balanced between offensive and defensive players.

In the 4-1-4-1, the four defensive backs operate as a typical defensive line. While the two side defenders watch the edges of the pitch, the two center defenders should be ready to step in and assist with central defense if the ball gets past the holding midfielder.

In the 4-1-4-1 formation, there is one striker who is deemed the leader of the offense but relies heavily on the four top midfielders for backup. The center striker should position themselves on the field to be open for a long cross pass or to take a shot on goal from just a few yards out.

The 4-1-4-1 is an extremely strong defensive formation. Since there are four defensive backs dedicated to holding the line, along with a defensive holding midfielder providing support, it is very difficult for opponents to create scoring chances.

The 4-1-4-1 is also a very sound offensive formation, as two of the midfielders typically play a more attack-oriented role. They provide support to the striker on the offensive build up. Thus, the 4-1-4-1 is one of the most balanced formations in soccer.

One of the main cons of the 4-1-4-1 is that the striker is the one lone player at the top of the formation. There is an immense amount of pressure on the striker, as they are tasked with being the sole finisher. While the attacking midfielders will support, the finishing is usually left to the striker.

It is also relatively easy to find yourself out of position when you are in a 4-1-4-1. This results in counterattacking opportunities for the opposing team when they gain possession of the ball.