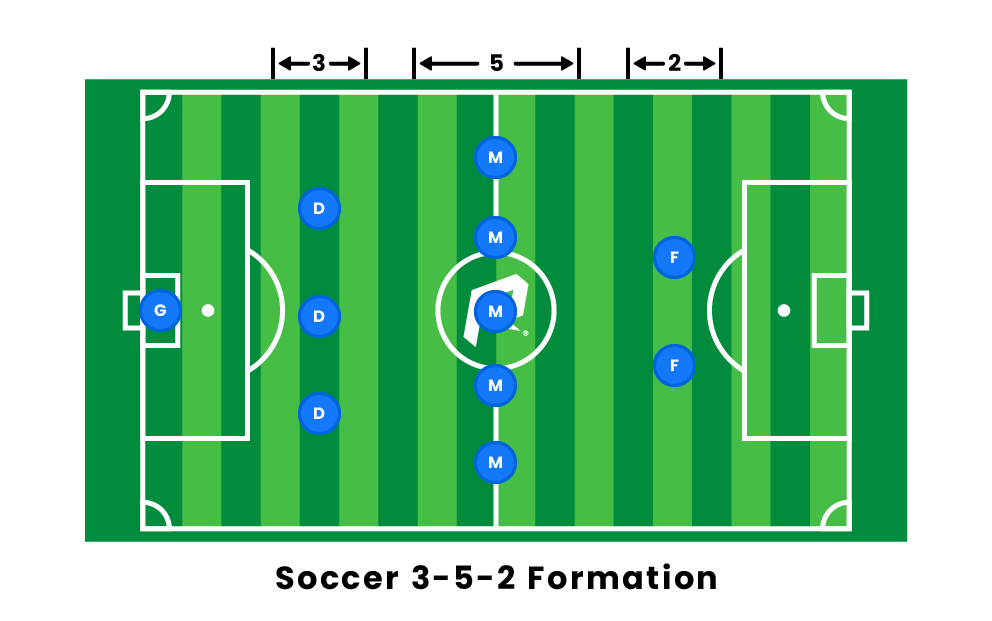 There are many different ways to position soccer players on the field. Some formations are more defensive than others, while others have a heavy focus on offense. Some might even be a balance of both, like the 3-5-2 formation.

A 3-5-2 formation is a positional shape in soccer with three backs, five midfielders, and two forwards. The 3-5-2 formation is mostly considered a defensive formation, as the three defenders and three central midfielders carry strength on the defensive side of the field. However, power is easily transferred to the offensive side of the ball, especially with the use of speedy wingbacks.

The three defenders will mostly stay on their half of the field to ensure no goals are scored in their net. In a 3-5-2 formation, three central defenders are used, with two midfielders dropping back as wingbacks in defensive situations. This allows the defense to provide five-wide coverage in front of their goal.

The forwards typically stay in the attacking half of the field. The two forwards work closely with the attacking midfielders to wear down and defeat the opposing defense. In this formation, the striker must be physical and excellent at pressing, as part of their duties is drawing in defenders to create openings for other attackers.

The 3-5-2 formation is known for its strong midfield, which is heavily defended by five midfielders. This means that a team using the 3-5-2 formation can easily dominate in possessions, enhancing the likelihood of scoring and stealing possessions from the opponent. The five-midfielder format also means that the two midfielders on the ends of the line can easily swing forward to support the strikers, giving their team what essentially amounts to four strikers in total. These two midfielders can also easily fall back and join the defenders to strengthen their line.

Since there are only three defenders, the opposing team can often find gaps to dribble through. Be sure to properly space yourselves out and help out the midfielders as the ball is moved around the field to prevent the ball from going too close to your net. The biggest weakness of the 3-5-2 formation is the strain it puts on defenders, as they must fill the traditional roles of both center backs and fullbacks.

In soccer, a 3-5-2 formation utilizes three defenders, five midfielders, and two forwards. It is considered a defensive formation, as two of the midfielders are typically wingbacks that drop back to provide support in defensive situations. However, it can also be very aggressive on offense, with two forwards to keep the opposing defense under constant attack. The large number of midfielders provides excellent pass-through when transitioning to offense.

Coaches might look to use this formation if they find the turnovers in the game to be frequent and present a challenge to their team. Having a solid lineup of midfielders may be beneficial to managing turnovers and gaining back possession of the ball in the middle of the field. Because of its defensive strength, a 3-5-2 is also a good choice when facing a strong offense that likes to move the ball.

How do you defend against a 3-5-2 formation?

To successfully defend a 3-5-2, the team will need a strong midfield line. Since a lot of plays will occur within the space of the five midfielders, it’s important to have an opposing midfield line that can jump quickly between defense and move the ball to their end of the field and up to your offensive players.