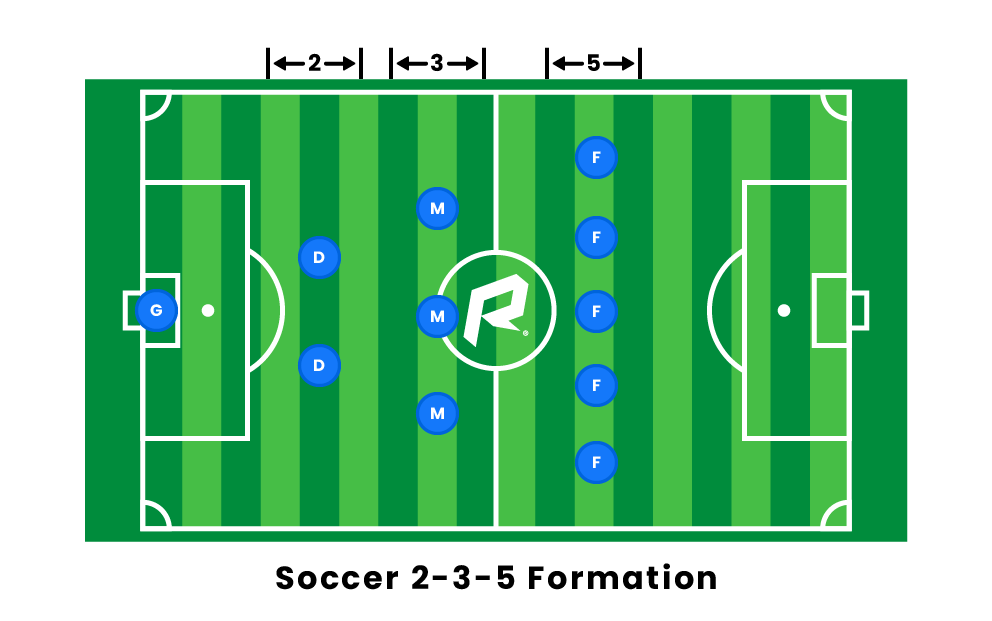 A unique trait and common downfall of the 2-3-5 formation are its two defensive backs. Since the formation is such a heavy attacking formation, two players are left as the last line of defense before their goal. This puts a lot of pressure on them as a trade-off for the formation’s offensive power.

There are three midfielders in this formation, usually composed of two outside midfielders and a center midfielder. As in other formations with this midfield presence (like the 4-3-3), these midfielders can triangulate to push the ball forwards or fall back if their team is in need of a sudden defensive surge. Midfielders must act fast to make up for the formation’s lopsided offense when the opposing team attempts a counterattack.

The main pro of the 2-3-5 formation is its immense offensive power. By sacrificing players that would typically serve as defensive backs, this formation has more than double the amount of forwards of most team structures. This large number of players also allows for a lot of offensive versatility because those five players can structure themselves in a variety of ways to quickly pass the ball around and attempt a goal.

The main downside to the 2-3-5 formation is the lack of defensive presence. There are only two players on the last line of defense, making it extremely important to keep the ball on the attacking half of the pitch. If the opposing team is able to break through the first line, there will be only two midfielders and two defenders standing in the way of the goal. This is contrary to most popular formations in soccer, which typically have at least three defensive backs.

While it was extremely popular in the early days of soccer, the 2-3-5 is no longer a popular formation. The 2-3-5 formation is a good representation of the attack-heavy history of soccer. As soccer moved from an offensive-dominated game to a defense-oriented one, formations such as the 2-3-5 got less popular. However, some coaches have been tipping the scales toward making offense the main priority, so we may see the resurgence of many attacking formations, such as the 2-3-5.

What is the pyramid formation in soccer?

In soccer, the pyramid formation is another common way to refer to the 2-3-5 formation. This is because the formation at the start of play often resembles a pyramid with the goalkeeper as the peak of the pyramid, the defensive backs and midfielders as the central layers and then the five forwards as the wide base of the pyramid. It is fairly for certain classic formations, such as the 2-3-5, to have informal nicknames.