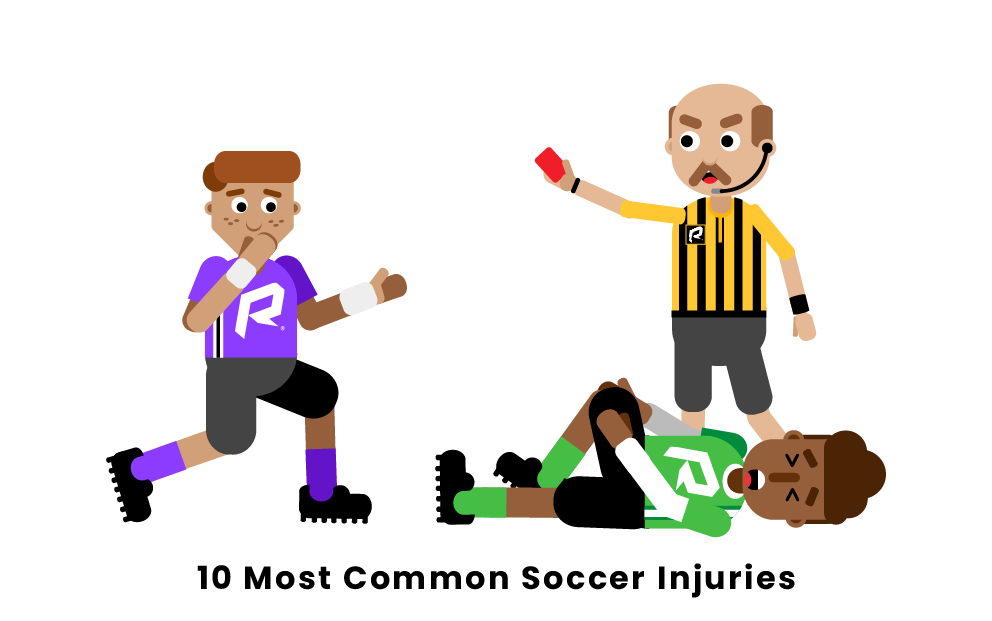 What are the most common soccer injuries?

Aside from  basic cuts and bruises, knee injuries are the most common type of injury in soccer. It makes sense since the majority of soccer is kicking the ball and running. It’s especially tough since players have to quickly adjust to follow the ball, putting a lot of stress on their knees.

If a player notices some knee pain, they should rest and ice the area. Otherwise, it could get worse as a strain or ACL tear. Additionally, players should continually stretch their legs and wear a brace in case they have frequent knee issues.

The next most common soccer injury is an ankle sprain. These are common for similar reasons to knee injuries. Soccer athletes do a lot of running and make quick direction changes which make it easy for them to twist or roll their ankle. Ankle sprains can be different levels of severity depending on the injury.

If a player sprains their ankle, they should rest, elevate, and ice it until it feels better. If the sprain doesn’t get better after this, they should consider seeing a doctor in case of a more serious injury. Additionally, players can wear ankle braces to prevent future problems.

The third most common injury is a less serious one. However, anyone who has ever had shin splints, knows how uncomfortable they can be. A soccer player will notice they have shin splints when their shins hurt and they have trouble lifting their toes up.

Since shin splints make it very uncomfortable to run and kick the ball, it’s best for players to rest if they feel any shin pain. To avoid this injury, athletes should be careful when choosing new shoes and stretching before both practice and games.

Next on the list is another common injury that results from overworking the body. Achilles tendonitis is a frequent injury for soccer players. The achilles tendon is what connects your heel to your calf muscles. It often gets overworked from running in soccer games and other running sports.

A pulled groin is another common injury. This one is unfortunately very unpleasant to have. Groin pulls are common in soccer though because the groin is constantly being stretched during the game as players run, kick, and slide to reach the ball. These can all lead to the groin getting pulled or even torn.

If an athlete suffers from a pulled groin, they should rest for a while in order to let the area heal. Additionally, it’s recommended for athletes to take ice baths to help a pulled groin. In some serious injuries, the player may need surgery to completely recover.

In order to prevent this injury, players should take lots of precautions when going to head a ball. They should hold out their arms to create some space with other players. Soccer players should also never hit the ball with their temple. Lastly, they should know when it’s too dangerous to attempt a header.

Athletes will know they’ve suffered from this injury once they start feeling pain in the area or even hear a pop. To prevent this injury, players should always warm up before playing as well as stretch the hamstring muscles. Additionally, players should work on strengthening the area to prevent future problems.

Heel spurs are another common injury that impacts most soccer players at some point. Plantar Fasciitis, or heel spurs as they are more commonly known, is an injury affecting the heels that is most prominent in the mornings. As the day goes on, the pain normally subdues.

To prevent heel spurs from happening, players should gradually warm up to more physical activity as well as wear comfortable shoes while playing soccer. If heel spurs still happen though, it will usually go away on its own but stretches can help speed up the recovery process.

Next on the list is Iliotibial Band Syndrome or IT Band Syndrome. This syndrome is also common for soccer players as they tend to overwork this area of the leg. Your IT band goes from your hip to below your knee. As soccer players run during a game, they tend to create a lot of friction between the band and their bones. This friction causes the area to hurt and sometimes become inflamed.

The preventative measures for this injury are similar to the other ones mentioned earlier. Players shouldn’t overwork themselves, replace their shoes as they get worn, and always warm up and stretch.

Stress fractures occur when an area either gets overworked or repeated contact occurs in the same spot. With soccer, this injury is prominent as athletes continually run a lot and tend to overwork the same areas in their bodies.

If a player receives a stress fracture they should rest for anywhere from two to eight weeks depending on the extent of the injury. They should also apply ice to the area to soothe the pain. To prevent this from happening, players should not overwork themselves, wear comfortable shoes, and warm up and stretch before playing.