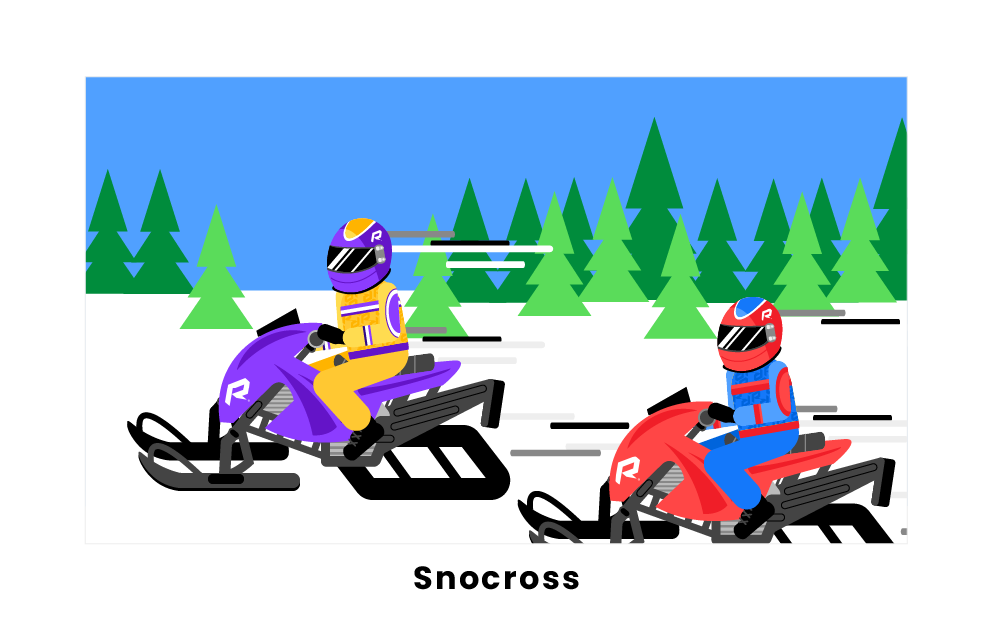 Snocross is a racing sport involving snowmobiles that compete across snowy tracks full of twists and turns, ramps, and obstacles. It is high-octane, dynamic, and full of excitement. Snocross is played in the winter, particularly in areas with high snowfall or freezing temperatures, to preserve the racing tracks. Snocross gets its name from motocross, a sport in which motorcyclists race across dry tracks. In fact, many motocross riders compete in snocross in the winter as well.

Since becoming an official X Games event in 1998, snocross has only grown in popularity. Now, events in the United States typically attract an average of ten thousand spectators. In addition to the US, the sport is also popular in Canada and Europe, namely Sweden and Finland. The origin of snocross can be traced back to the early 1960’s when Joseph-Armand Bombardier’s invention of the snowmobile began being used in races.

Snocross is a snowmobile racing sport that incorporates speed and quick maneuvering. This “snow” variation of motocross has tracks full of tall jumps, obstacles, and a variety of twists and turns. Specifically, jumps can reach up to 30 feet, meaning riders can travel more than 100 feet before returning to the ground. In competitions, snocrossers race either simultaneously or individually and are timed; the fastest time wins the event. Like other motorsports, events consist of multiple races, including qualifying rounds, heat races, and finals.

How fast are the snowmobiles used in snocross races?

In snocross events, snowmobiles can go up to 120 miles (193 kilometers) per hour on flat tracks. However, given the intricacies of the racecourse, including ramps and turns, speeds are usually clocked at 30 to 60 miles (48 to 96 kilometers) per hour. That being said, beginner and amateur racers typically compete at slower speeds.

What equipment do I need to safely snocross?

Snocross is an extreme sport and thus requires plenty of equipment to ensure safety. To start, one needs a regulation snowmobile equipped with appropriately sized skis, carbides, sleds, and the right amount of gears. Personal safety equipment includes a helmet, riding jacket, elbow and shin pads, gloves, and snow goggles. The helmet must also be at least 50% orange for visibility, ensuring that other riders can see you in case of a crash or fall.

Pages Related to What is Snocross?