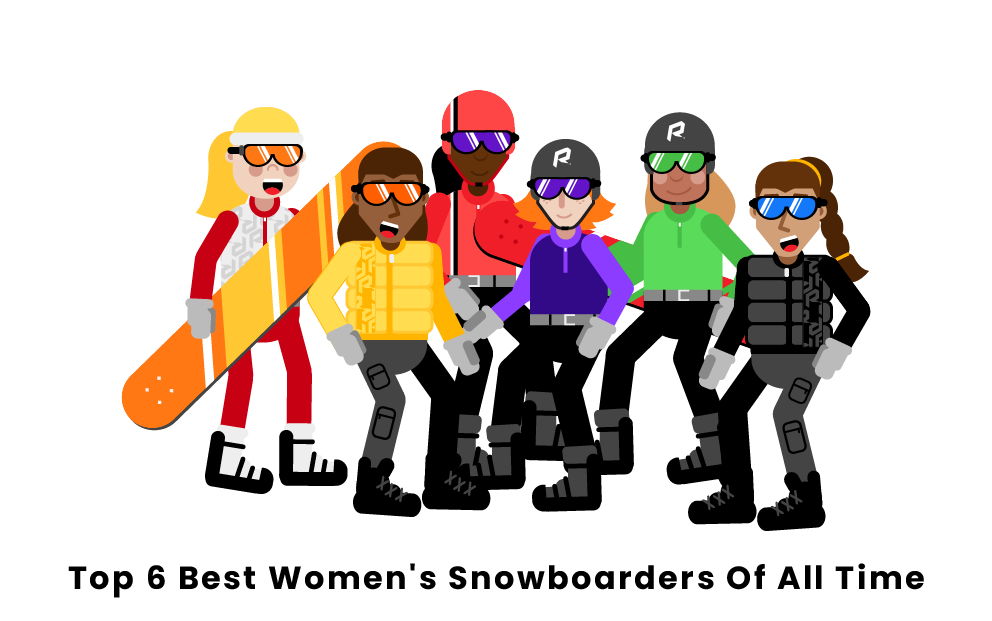 Snowboarding is one of the most popular winter sports, with millions enjoying it each year; women have played an integral role in the sport, growing and evolving it to what it is today. Keep reading to learn about the top six women’s snowboarders of all time.

Who are the best women’s snowboarding athletes of all time?

Karine Ruby is known as a trailblazer in terms of women’s professional snowboarding. Starting her passion at a young age, she competed professionally at the age of 14. She broke gender norms by being the only female in many competitions through her youth and being the first woman ever to win a gold medal in Olympic snowboarding. Ruby won the inaugural Olympic giant slalom snowboarding event at the 1998 Winter Olympics in Nagano.  She had an incredibly successful career, amassing over 60 FIS Snowboarding World Cup wins and another Olympic Medal during the 2002 Salt Lake Winter Olympic Games in the parallel giant slalom event.

Jamie Anderson was born and raised in California, yet the sunny weather did not stop her from becoming one of snowboarding's most successful X Games competitors. She won eight gold, seven silver, and four bronze medals throughout her X Games career. Anderson competed in two Olympic games, the 2014 Sochi Winter Games and the 2018 PyeongChang Winter Games. She competed in both slopestyle and big air events, where she has won two golds in slopestyle (2014 and 2018) and one silver in big air (2018).

Considered one of the greatest American snowboarders, Kelly Clark is the most decorated American Olympic athlete in snowboarding. Growing up in Vermont, her love for snowboarding blossomed at a young age, and she eventually enrolled at Mount Snow Academy prior to going pro. She has competed in five Winter Olympic games within the Halfpipe event: Salt Lake City 2002 (Gold), Turin 2006 (Fourth), Vancouver 2010 (Bronze), Sochi 2014 (Bronze), PyeongChang 2018 (Fourth). Along with these accomplishments, Kelly also claimed 13 FIS Snowboard World Cup halfpipe wins and 21 consecutive SuperPipe appearances at the X Games in Aspen.

Lindsey Jacobellis is one of the most successful snowboarders of her time. A member of Team USA, Linsdey grew up in Connecticut and found her success primarily in the snowboard cross event. Jacobellis won ten X Games medals in numerous events; she participated in four Olympic games with Team USA and won a silver medal in the 2006 Turin Winter Games. Along with these significant achievements, Lindsey has also won the Snowboarding World Cup 31 times, cementing her status as one of the greatest female snowboarders ever to set foot on a mountain professionally.

Hannah Teter grew up in Vermont among a family of successful snowboarders. After starting at the age of 8, a natural snowboarder, Hannah would win the World Junior Championship in Finland by 2002. Prior to her debut during the 2006 Turin games, Hannah made waves by becoming the youngest member ever to join the team. Hannah eventually became an 8-time World Cup Medalist, a three-time Olympic participant, and one of the most influential female voices in her sport. She won the X Games 2004 SuperPipe gold at age 16 before following up that impressive performance by winning halfpipe gold at the 2006 Winter Olympics and silver in 2010.

The youngest on this list, Chloe Kim, is one of snowboarding's fastest rising stars. She became the first person to win three X Games gold medals before turning 16 years old. Kim was also the first athlete ever to win all four major snowboarding titles: Worlds, Youth Winter Olympics, Winter Olympics, and X Games. A stunningly skilled snowboarder, Kim's dominance is unprecedented. Her natural talent in the SuperPipe event has led Kim to six Winter X Games Titles by the age of 21. Considering that Kim has already competed in and won an Olympic gold medal while also previously recording the highest score in Youth Olympic Games snowboarding halfpipe history, the future is blindingly bright for this young prodigy.

What women’s snowboarder has the most Olympic medals?

Jamie Anderson and Kally Clark share the record for most Olympic gold medals amongst female snowboarders, holding three medals apiece. Jamie has won two golds and one silver in the 2018 PyeongChang and the 2014 Sochi winter games, respectively. On the other hand, Kelly has one gold medal, won in Salt Lake City (2004), and two bronze medals won in the Vancouver (2010) and Turin (2006) Winter Olympics. In terms of overall appearances, Kelly Clark is the all-time leader by appearing in five different Olympics, spanning 2002 to 2018.

What women’s snowboarder has the most FIS Snowboard World Championship wins?

Karine Ruby holds the honor of having the most FIS World Snowboarding Championships. She won 67 separate FIS titles over her career and placed an additional 127 times. As one of the most decorated snowboarders ever, her illustrious career spanned from 1996 to 2005 saw her compete in giant slalom and snowboard cross events.

Who has the most X Games gold medals for women’s snowboarding?

The X Games has historically been one of the most recognized snowboarding competitions in the world. Lindsey Jacobellis holds the record for most X Games gold medals in snowboarding for female athletes, winning ten gold medals over her career from 2003-2016. She trails only Shaun White for most gold medals in X Games history. Lindsey won these gold medals in various events, including Snowboarder X, Slopestyle, and Superpipe, showcasing her diverse set of talents.

Pages Related to Top 6 Best Women's Snowboarders Of All Time