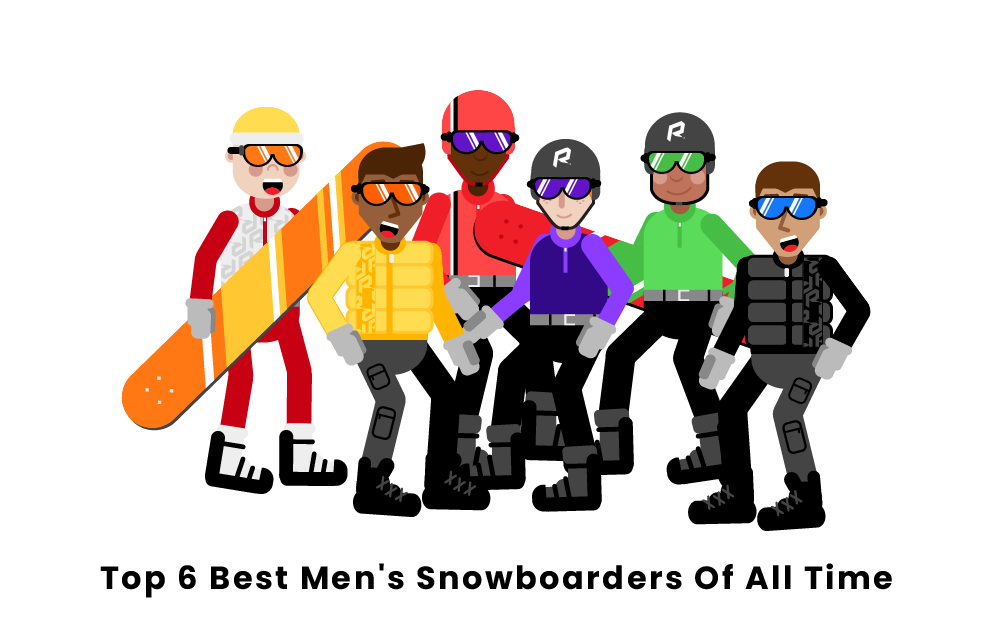 Snowboarding was introduced to the Olympic games in 1998, featuring only two different events: the giant slalom and halfpipe events. The sport was largely successful as it has been in every Winter Olympics since its debut and has even added two more events: snowboard cross and big air. Keep reading to learn about the top six men’s snowboarders of all time.

Who are the best men’s snowboarding athletes of all time?

Shaun White was born just outside of San Diego with a heart defect that required two major surgeries before the age of 1. Shaun was extremely talented, not only at snowboarding but skateboarding as well, so he was able to develop many skills that benefited him in both sports. He managed to win his first Olympic gold medal at age 19 in the 2006 Turin Winter Olympics, which made him one of three athletes in history to be featured on the cover of Rolling Stone Magazine, along with Michael Jordan and Muhammad Ali. White helped bring the sport of snowboarding further into the mainstream as his bright red hair and dominance on the halfpipe earned him a spot on Forbes’ “30 Under 30” issue back in 2016. In 2012, White performed the first-ever perfect run in men’s snowboarding history, despite having already won the competition before his final run. His run was full of brand-new tricks and unprecedented combos that the judges believed only White could have pulled off so flawlessly.

Mark McMorris was born in Saskatchewan, where he quickly outgrew the local snowboarding talent and began traveling to other provinces for competition. McMorris has a unique, free-spirited training style. He has never had a formal coach. Instead, he gained inspiration from his idol Terje Håkonsen and opted to test out new moves on the halfpipe. Like White, he had a passion for skateboarding that overlapped with his snowboarding development. In March of 2017, McMorris was involved in a backcountry skiing accident that nearly killed him, as he was left with a fractured jaw, arm, pelvis, and ribs, in addition to a ruptured spleen and collapsed lung. After recovering from his crash, he managed to win a Big Air World Cup event in November of 2017 and qualify for the 2018 Pyeongchang Winter Olympics.

Max Parrot is a Canadian snowboarder who has managed to find success despite his career being so young and filled with unique challenges. Max was raised by his father, Alan, a Canadian water skiing champion and talented alpine ski racer, which set him on his path to snow sports. In 2016, Parrot became the first snowboarder ever to land a double backside rodeo, which is one of seven tricks that Parrot was the first to ever perform. In December of 2018, Parrot was diagnosed with Hodgkin’s lymphoma. Over the next six months, he underwent 12 sessions of chemotherapy before finally announcing in July of 2019 that he was cancer-free. Just one month later, Parrot managed to win gold in the Oslo X Games Big Air Event.

Terje Håkonsen is a Norwegian-born snowboarder who put himself on the map with his performance at the 1990 Burton US Open. Håkonsen is one of the most controversial members of the snowboarding community, but he is among the earliest legends of the sport. He skipped the 1998 Olympic Games to protest the International Olympic Committee’s decision to allow the FIS, a skier-run organization, control over the snowboarding rules in Nagano, instead of the ISF, a snowboarder-run organization. Håkonsen has continued to emphasize the differences between skiing and snowboarding while also helping improve the sport by developing events and the TTR, which eventually became the World Snowboard Tour.

Danny Kass is an American snowboarder that burst onto the scene with a massive 2001 performance, winning four Grand Prix Gold Medals, the X Games, and US Open in that year. He’s known for being a free-spirited rider that appeals to many of the sport’s rowdier fans, but that free-spirited attitude has also landed him in plenty of legal trouble. Kass managed to snag the Silver Medal at both the 2002 and the 2006 Olympic Games. His creative style was a huge part of what allowed him to introduce a number of previously unthinkable combinations that helped to push the sport forward.

Travis Rice is an American snowboarder that was born in Jackson Hole, Wyoming, into a snow-loving family. Despite not competing in his first major snowboarding competition until age 18, he managed to win 30 Grand Slam snowboarding titles over his 12 years of competition. Rice is most famous for his filmmaking and storytelling regarding the sport of snowboarding, and he’s used his film platform to help make the sport more popular. Travis Rice is one of the sport’s more free-spirited riders and has often advocated for unique, new, and creative tricks. This free and creative style is what has led Rice more into the backcountry, freestyle ski route, and away from the rigidity that has overtaken snowboarding competitions.

What country has the most gold medals in snowboarding at the Winter Olympics?

Who has the most Olympic gold medals in men’s snowboarding?

Shaun White has won the most Olympic gold medals in men’s snowboarding, with a total of 3. White has always stepped up at the Winter Olympic games to deliver some of his best performances. He won his first gold medal in 2006 and followed that up with a dominant win in 2010. White fell short of gold in 2014, but landing back-to-back 1440s for the first time ever in competition allowed him to retake the top spot on the podium in 2018.

Who has the most Winter X Games medals in men’s snowboarding?

Mark McMorris holds the most Winter X Games medals in men’s snowboarding, with a total of 20 medals won over the course of his career. Shaun White had previously held this record before McMorris broke it in 2020. McMorris has won nine gold medals, eight silver medals, and three bronze medals at the Winter X Games, showing that he broke the record in dominant fashion, always managing to be on top of the podium.

Pages Related to Top 6 Best Men's Snowboarders Of All Time