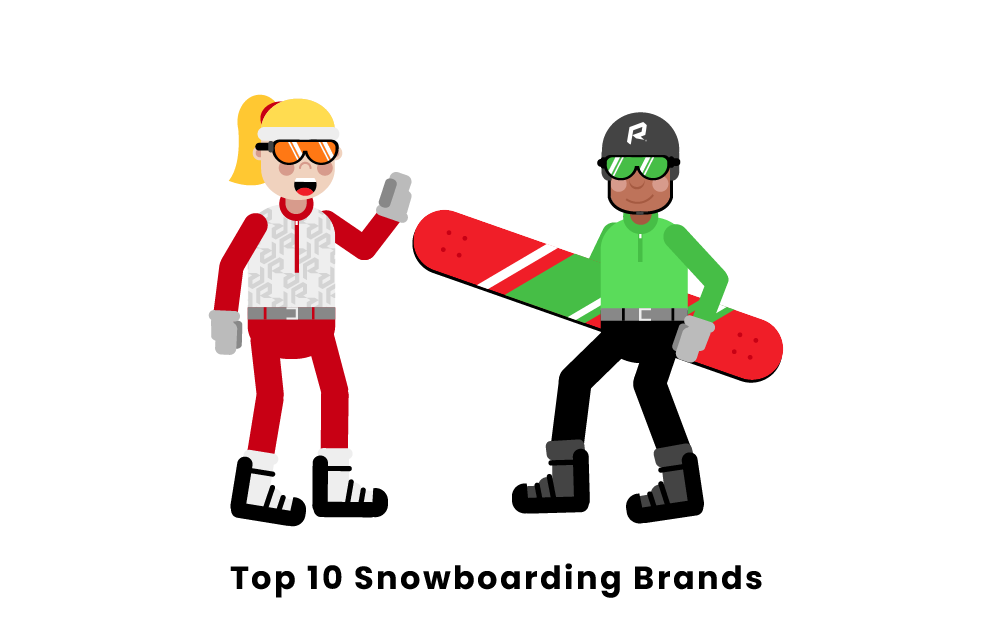 What are the most popular snowboarding brands?

Burton is known worldwide as the best snowboarding brand of all time. Burton snowboards are the most recognizable brand of snowboards. Based in Vermont, Burton has been a top player in the market since 1977. Created by Jake Burton, a snowboarder himself, the Burton snowboard is credited as the first modern snowboard. Burton sells everything from quality snowboards, snow gear and clothing, to accessories for men, women, and children. Burton focuses on sustainability in their products and have cutting edge technology and innovation in their gear. Burton has been seen on top snowboarders in the world, Shaun White, Marc McCorris, and Kelly Clark.

RIDE Snowboards comes in close to Burton as the top most innovative snowboard brand of all time. Founded in 1992, RIDE is a fairly recent brand of snowboards that made it to the top of the market through its technology and design. The snowboard company’s motto is “for the people,” meaning that the boards are designed with their consumers strongly in mind. The RIDE snowboard team is built off of current well known successful snowboarders and up and coming snowboarders that all give different insights to the design and technology of the brand. RIDE also made its name through their clothing brand that made streetwear style snowboarding clothing and gear.

Gnu snowboards use banana technology which is loved by trick snowboarders. While those are boards for tricks and experts, Gnu offers a variety of types of boards for less experienced snowboarders. They offer quality boards and clothing for men, women, and children of all levels of experience.

Arbor snowboards comes in next as the top snowboarding brands and one of the most environmentally friendly brands. Arbor snowboards are known for their quality, performance, sustainability, and materials being sustainably sourced wood and bamboo. This has been Arbor’s 24 year commitment to sustainability and technology. Arbor offers apparel only for men, while snowboards are unisex; for men and women, and even youth. Arbor also sells skateboards and other accessories that diversify their brand offering. Since 1995, Arbor has been known for their quality boards and their dedication to the environment and to the people.

Roxy is a well known brand, for everything it makes including their quality snowboards. Well known for many different things, Roxy is still one of the best snowboarding brands in the world. Specifically, Roxy is a top brand for women snowboarders. Roxy snowboards are typically more affordable in comparison to other boards and the brand offers sizes that are perfect for women. Roxy includes snowboards for all levels of snowboarding, from beginners to experts. Aside from snowboards, Roxy is known for other sport gear for women, like surfing.

Lib Tech comes in sixth of the best snowboarding brands, made from snowboarders, for snowboarders. Their engineers not only create the boards and the technology, but use them too. Lib Tech works to release new shapes and flexes to appeal to all different types of snowboarders. Aside from snowboards, Lib Tech focuses on other sports like skiing, surfing, and skating. Lib Tech focuses on making the best boards for all of these sports. Lib Tech, like others on this list, focuses on their environmental process, making sure it is the safest and most efficient. They commit to zero hazardous waste.

Next on the list is Capita, one of the most recent snowboarding brands to make it to the top. In 2000, Capita Snowboards came from a garage in Seattle, Washington by two former professional snowboarders, Blue Montgomery and Jason Brown. Working with snowboarder friends like Dustrin Krysak and Corey Smith, Capita was able to make its mark in the snowboarding industry because of the trust and success of these snowboarders. The snowboarding brand moved to Austria in 2013 when the Elan snowboarding factory declared bankruptcy and since then, Capita boards have been produced and manufactured there.

Nitro comes in next on the list, also founded by two former snowboarders, Tommy Delago and Sepp Ardelt. It was founded in 1989 in Seattle, Washington. Nitro snowboards are made for all types of experienced snowboarders and offer different styles for different preferences like freestyle, back country, and all-mountain snowboarding. Nitro sells snowboards, clothing, and accessories for men, women, and children. The snowboarding brand also owns two outerwear brands, Nitro Outerwear and L1. The brand is one of the best worldwide brands with offices in Europe and across the United States. Their mission is to offer snowboarding gear to every type of snowboarder, which is what makes them so popular.

Rossignol is the oldest on the list of the top snowboarding brands, as it has been a top brand since 1907. Rossignol has been a top player in the snow industry for skiing and snowboarding for over 100 years now. The brand was born in the French Alps and is still extremely popular and easily recognizable as a brand. Their style resembles the French style and their boards and snow gear like clothing and accessories are seen on champions of the sports. Aside from snowboarding gear, Rossignol has expanded and offers lifestyle clothing items. Their vast product range and quality is what makes them stand out from other brands, and still be a top brand.