How Does Scoring Work in Snowboarding? 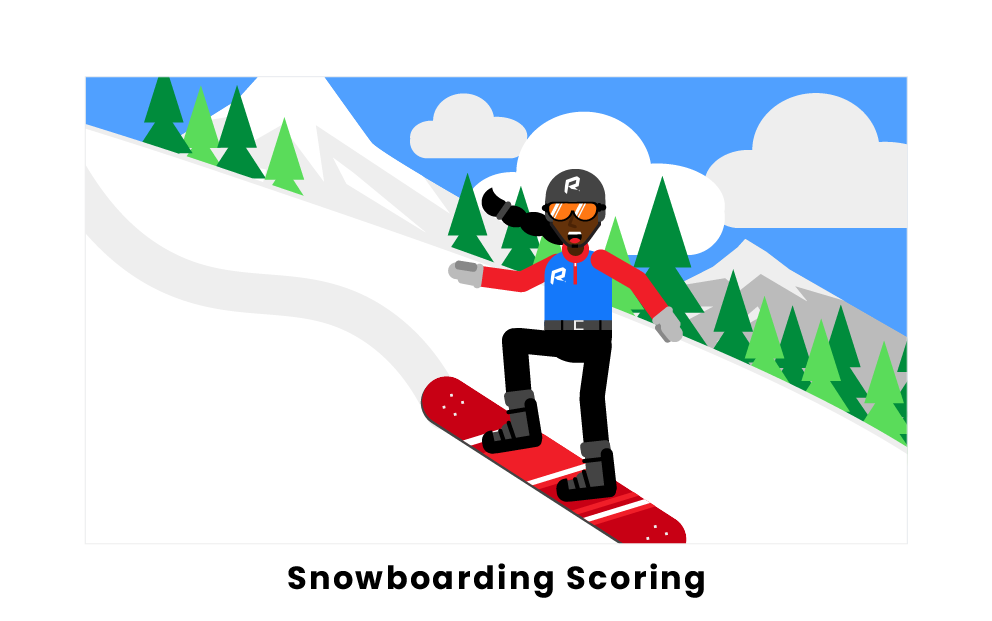 Snowboarding is a popular winter sport in which a rider stands on top of a board while descending a slope. There are many different variations of competitive snowboarding, and therefore the scoring depends on the style. The types include slopestyle, halfpipe, snowboard cross, big air, and parallel giant slalom.

Slopestyle is a type of snowboarding competition in which riders go down a slope through various obstacles and perform tricks, attempting to earn the highest score. 60% of an athlete’s total score is based on the tricks, while the other 40% is on “overall impression.”

Under this method of scoring, a person is evaluated based on five categories: amplitude, difficulty, variety, execution, and progression. Amplitude measures someone’s height or distance traveled. Difficulty is self-explanatory, as judges decide how hard a trick is to perform. Variety is determined by how many different tricks the athlete attempts. Execution measures how well the competitors do on their tricks. Finally, progression is similar to variety, except athletes are judged on trying skills that others haven’t done.

Halfpipe snowboarding features snowboarders riding down a large, curved ramp while performing tricks. Scoring is based on a 1-100 scale.

Halfpipe scoring is much less complicated than slopestyle. In this competition, athletes perform six runs and are judged based on a 1-100 scale, with the criteria being based on the judges’ overall impression. The best and worst scores are dropped, and the remaining four are averaged out to make the athlete’s final score.

Snowboard cross is the only type of snowboarding in which multiple people are riding the slope at the same time on the same course.

Cross snowboarding is fairly straightforward in terms of scoring. The snowboarder that gets through the course fastest wins the competition. There’s no scoring based on tricks or style. It’s simply a race to the finish.

In big air snowboarding, competitors are judged based on one massive jump rather than a series of tricks and smaller jumps.

Similar to halfpipe scoring, competitors are evaluated based on a 1-100 scale and attempt six runs. The highest and lowest scores are dropped, and the remaining four are averaged out to create the final score.

Athletes are judged based on four categories: difficulty, execution, amplitude, and landing. The first three categories all carry a similar definition to slopestyle scoring. Landing is a criteria used to see how athletes control themselves after hitting the ground from the massive jump.

Giant Slalom scoring is a speed competition in which athletes race on parallel courses navigating gates (mark turns). This event is scored based on time rather than scores provided by judges.

This competition involves no tricks or any requirement to perform tricks. It’s a race down a slope, with the person finishing first being the winner. The only “scoring” comes into play if someone blatantly interferes with the opponent or misses a gate. In both instances, the person can be disqualified.

What is the scoring system in snowboarding?

There is no universal scoring system in snowboarding as there are many different types of competitions. Competitions like halfpipe, slopestyle, and big air involve the athletes getting multiple tries to accumulate a better score for performing tricks. Athletes are given multiple runs that are scored by judges. In other formats of snowboarding events, including snowboard cross and parallel giant slalom, athletes are scored based on the quickest time to complete the course.

How does snowboarding scoring work in the Olympics?

In the Olympics, the scoring depends on the type of snowboarding event. However, there are some common factors the athletes are judged on in performance competitions, such as the 0-100 points scale and difficulty of the tricks performed. Scoring in snowboarding at the Olympics is similar to that of other competitions, the only difference being that the top-three athletes will receive Olympic medals.

How many snowboarding events are in the Olympics?

Pages Related to How Does Scoring Work in Snowboarding?