Why Do Snooker Players Use Their Chins When Shooting? 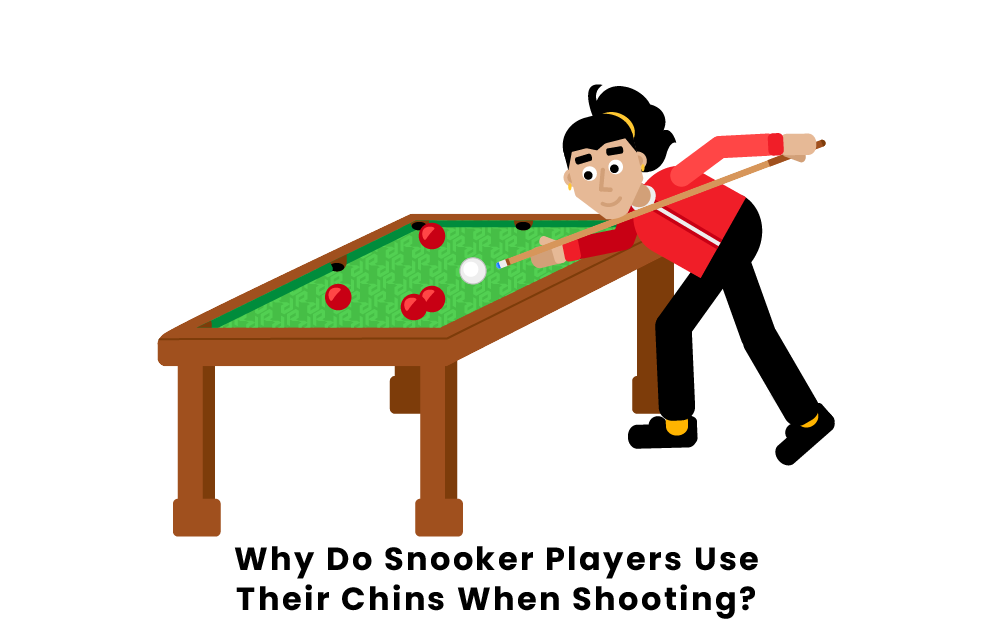 If you are a snooker fan, you have probably noticed the way a player takes their shot, bent down with their chin resting on their cue. Meanwhile, if you follow other cue sports, you have likely seen billiards and pool players shooting in a more upright stance, with their chins far away from their cues. So why the difference? More specifically, why do snooker players use their chins when shooting? Find the answer below, plus more information about proper snooker shooting form.

Unlike billiards and pool, the pockets on a snooker table are fairly small relative to the size of the ball. In games like pool, players use techniques such as ball spin and caroms within the pocket to sink shots. By contrast, snooker players must make every shot head-on, aiming the object ball directly at the center of the pocket. Therefore, accuracy is of utmost importance when taking a shot in snooker compared to other cue sports. Nearly every reason a snooker player uses their chin when shooting is in the interest of maximizing precision.

Resting the chin on or just above the cue helps a snooker player achieve proper visual alignment for their shot. Top players practice their shot alignment obsessively, dialing it in so that their heads and eyes are perfectly positioned to visualize the line of the shot. This is a process analogous to a marksman lining up their rifle sights. Proper shot alignment assists with precision, helping good mechanics translate to better accuracy.

One of the many things a snooker player does when working on their visual alignment is commit to memory the exact position the cue is in relation to their chin when shooting. This requires remembering where the cue touches the chin or where it appears in peripheral vision in relation to the chin. Then later, when shooting in a game, that player can easily get the cue in the proper position based on where they remember it should touch or appear near their chin. When that player sets up a shot in competition, using their chin as a visual or tactile reference point is simply part of the complex system of motions that constitute proper snooker shooting form.

In addition to functioning as a reference point for visual alignment, snooker players use their chins as a contact point for stability. A snooker stance is narrower, with the feet more turned in than a pool stance. As a result, less stability is derived from the legs. As a result, snooker players must rely more on their upper bodies to provide support and prevent unwanted movement through the entire motion of their strokes.

You may not realize it, but snooker players also run their cues along their chests for additional stability. They attempt to get their bridge hand, chin, and chest in precise alignment so that the cue travels in a perfectly straight line throughout the motion of their shot.

Keep in mind that although snooker players are known for resting their chins on their cues while shooting, many do not. In fact, plenty of players at the highest level shoot with a stance that holds their chins some distance above the cue. This is because every snooker player has a different body structure and ideal range of motion. Thus, every player has a different ideal shooting form, part of which is informed by what makes the player feel comfortable and confident. Even in international tournament play, some snooker players are more effective in a stance that rests their chin on their cue, while using a more upright stance works better for others.

Individual anatomy and ideal motion play a big part of how a snooker player incorporates their chin into their shooting stance. However, part of this decision is informed by personal preference, custom, and tradition. Snooker players coming from other cue sports may feel more comfortable with their heads up simply because that is what they are used to. For this same reason, many pool players refuse to lower their heads when shooting, even though it has been suggested it would improve their accuracy on long shots.

Ultimately, snooker players use their chins because it helps them achieve fundamentally sound, repeatable mechanics while shooting. To an extent, the use of their chin also makes a player feel more confident. It contributes to their complex muscle memory of proper shooting form. The practice gives them a sense of identity in common with all the other snooker players who shoot using their chins.

Pages Related to Why Do Snooker Players Use Their Chins When Shooting?