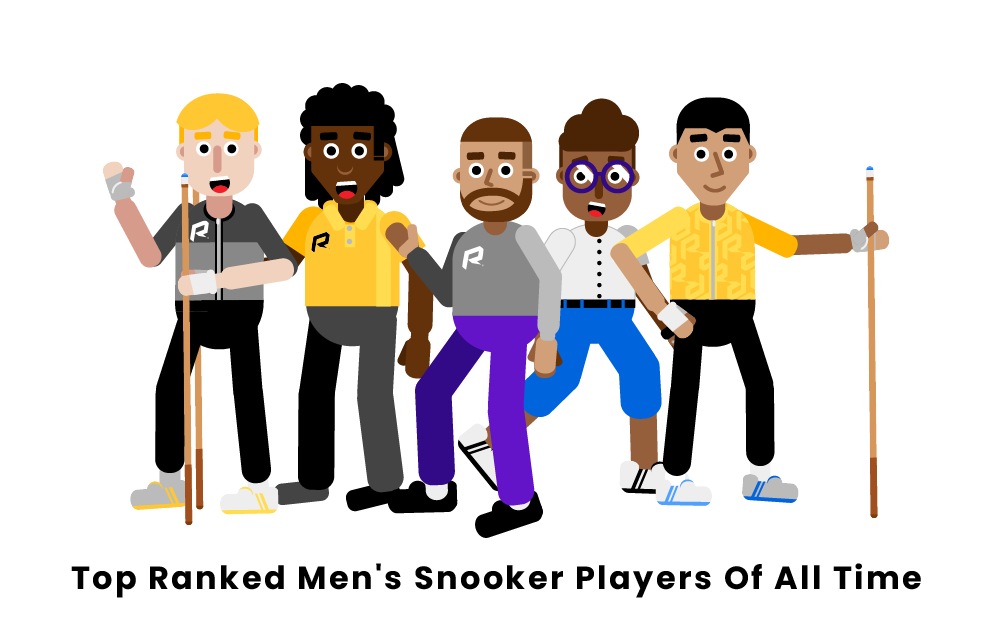 Snooker is a cue sport that is visually similar to billiards or pool, and was invented in the 19th century by officers in the British Army who were stationed in India. The game was further developed in 1875 by Sir Neville Chamberlain, and since then, it has become a popular sport managed by the World Professional Billiards and Snooker Association (WPBSA). Over the years, a number of notable athletes have made their mark upon this unique former “gentleman’s sport.” Read on to learn about the Top 5 Ranked Men’s Snooker Players of all time.

Who Are The Best Men’s Snooker Players of All Time?

There is little doubt among the snooker community that Ronnie O’Sullivan is one of the greatest players ever to have graced the sport. Becoming one of the youngest champions ever at age 17, O’Sullivan’s career in snooker is defined by milestone after milestone. His resume, play style, and dedication to the sport have all led many to rank him as the greatest snooker player of all time, especially after O’Sullivan tied Stephen Hendry’s record of seven World Championship titles in 2022.

Aptly nicknamed “The Rocket,” O’Sullivan became well known not only for his accolades but his uncanny wit and extremely fast-paced playing style. In a sport that is often slow, methodical, and tedious, O’Sullivan stood out amongst other players with his unique play style. His speed garnered him the record-breaking 147 break in 1997, and he has not slowed down since. Recently, Ronnie competed in the 2018 UK Championship, where he won his record 7th UK title. He also made an appearance in the 2019 Tour Championship, at which he achieved his 36th title as well as his 1,000th century break.

O’Sullivan has often responded to the press when asked how he feels about his career and how he attained such elite status among the snooker community. He cites his emotional investment in the sport as a key contributing factor to his success, stating that “the biggest love of my life is my snooker.”

More of a veteran of the sport than Ronnie, and certainly equally as impressive of a competitor, Stephen Hendry takes the number two spot on this list. A native of Scotland, Hendry became the youngest amateur champion in snooker history at only 15. Since then, he has claimed 36 ranked titles, which is the second-most all-time behind O’Sullivan. Although he is retired today, his snooker legacy is befitting of a true champion of the sport.

Hendry’s dominant streak in the 1990s is, to some, the greatest series of wins in the history of the sport. Between 1990 and 1998, Hendry made a name for himself as he held onto the number one ranking for eight consecutive years, longer than any other player in history up until that point. During this time, he also claimed seven world titles, cementing his legacy in snooker history.

While many will propose that Hendry fails to qualify as one of the greats due to his rapid decline in victories, as well as his abrupt retirement from the sport following the 2012 Championships, his impact on the sport and countless achievements speak volumes over his recent failures.

Nicknamed “Nugget,” Steve Davis, like so many others on this list, became a snooker legend due to his fiery career. If O’Sullivan dominated the sport in the 2000s, and Hendry dominated throughout the 1990s, then Davis was the champion of the 1980s. Although he lost it to Hendry in the 1990s, Davis held a record-shattering seven years at first rank during his golden years. He too is retired today, but still proved to be a force within the sport for many decades after his reign.

The first true millionaire of the sport, Davis has a string of notable accomplishments under his belt. He became the first competitor in the sport’s history to have a whitewash final, obliterating his opponent in a blowout 10-0 frame. Additionally, Davis became the oldest player in history to qualify for, and then subsequently win, a match in a world championship tournament. Even for his age, Davis showed how much competitive fight he still had in him in the later years of his play, comfortably earning him the title of third best snooker player of all time.

Alex Higgins was one of snooker’s most profoundly impactful players. His titles span 20 tournaments, and his matches have often been deemed as legendary. Notably, he has been touted as the greatest comeback story in snooker history, climbing back from a near-loss deficit against Steve Davis in the 1983 UK Championship to eventually take the first place prize. Fast, charismatic, and legendary, Higgin’s easily earns this spot on our list.

For his fast and aggressive playstyle, Higgins earned the nickname “Hurricane Higgins.” This made him the perfect player for the beginning of televised snooker matches, as audiences took a strong liking to him. Starting out in Northern Ireland, Higgins was propelled into fame starting in the 1970s with a win over former mentor John Spencer. Although he passed away in 2010, Higgins will be remembered fondly for the charm and skill he brought to the sport.

A worthy competitor to Ronnie O'Sullivan's reign in the 2000s, Mark Williams, has made a name for himself over the years and currently holds a spot within the top 10 snooker player rankings. After achieving his first World Champion title in 2000, Williams would go on to join the likes of Hendry, Davis, and others with his immaculate potting skills.

Williams first gained traction in the mid-1990s when he turned pro, and he would go on to gain the number one rank in 2000. Since then, he has appeared in over 40 professional final events and still continues to play to this day. Noted as being one of the best potters in the game, Williams sits comfortably among snooker elites. In 2011, he achieved a whopping four century breaks in a single tournament, asserting just how viable of a competitor he has remained.

The oldest of all the snooker players on this list, Ray Reardon, dominated the competition in the 1970s. The famous Welsh athlete rose to fame when he won six straight Welsh amateur titles. He turned pro in 1967 and went on to win his first World Championship in 1970. Reardon then went on to win all six of his World Championships in the 1970s, establishing his dominance throughout that era.

While he was never able to relive his same success in later years, Reardon was still able to compete at an extremely high level. He was able to reach the world finals in 1982 and went on to win two more professional tournaments. Reardon earned the nickname “Dracula” in his prime due to his vampire-like appearance and lethal style of play.

John Higgins, throughout his tumultuous career, has become known as one of the greatest snooker players in modern times. Higgins began playing professionally in 1992 and is tied for fourth place in terms of most Triple Crown titles won. His nine Triple Crown victories include four World Championships, which were won in 1998, 2007, 2009, and 2011. He has also held the number one world ranking several times throughout his career.

Higgins is known for his exceptionally strong breaking abilities, and he has over 860 century breaks as well as 12 maximum breaks in his career. Following his last World Championship victory in 2011, Higgins’ tenure has been very inconsistent, and he has never really returned to the level of play he presented earlier in his career.

In 2010, Higgins and his manager were alleged to be guilty of match-fixing over several different matches. After being caught on camera discussing the process of the match-fixing, Higgins claimed that he was simply playing along for his own safety. While he was cleared of this allegation, he was still suspended for six months due to his failure to report the incident and his impression of breaching betting rules. Nonetheless, Higgins was able to come back and win the following World Championship in 2011, cementing his continued legacy.

Who has won the most World Championships in snooker?

The record for the most World Snooker Championships victories belongs to Stephen Hendry and Ronnie O’Sullivan, both of whom have won the championships seven times. This is an astonishing achievement, although Ray Reardon and Steve Davis have also each won the event six times.

Who has the most 147 breaks in snooker?

The all-time record for 147 breaks (also known as maximum breaks) in snooker belongs to Ronnie O’Sullivan, who has pulled the feat off 15 times. The next closest competitor is John Higgins, who accomplished the rare break a total of 12 times. Such an impeccable break is hard to come by, so O’Sullivan’s place atop the all-time 147 break leaderboard only adds to his notoriety within the sport.

Who is the greatest snooker player of all time?

While the topic is certainly up for debate, Ronnie O’Sullivan is widely considered the greatest snooker player of all time. He’s earned countless distinctions in the event, including 21 wins in Triple Crown events and over 1000 century breaks, and was the youngest person to be ranked number one in a championship tournament, which he accomplished at the age of 17.