How Does Scoring Work In Snooker? 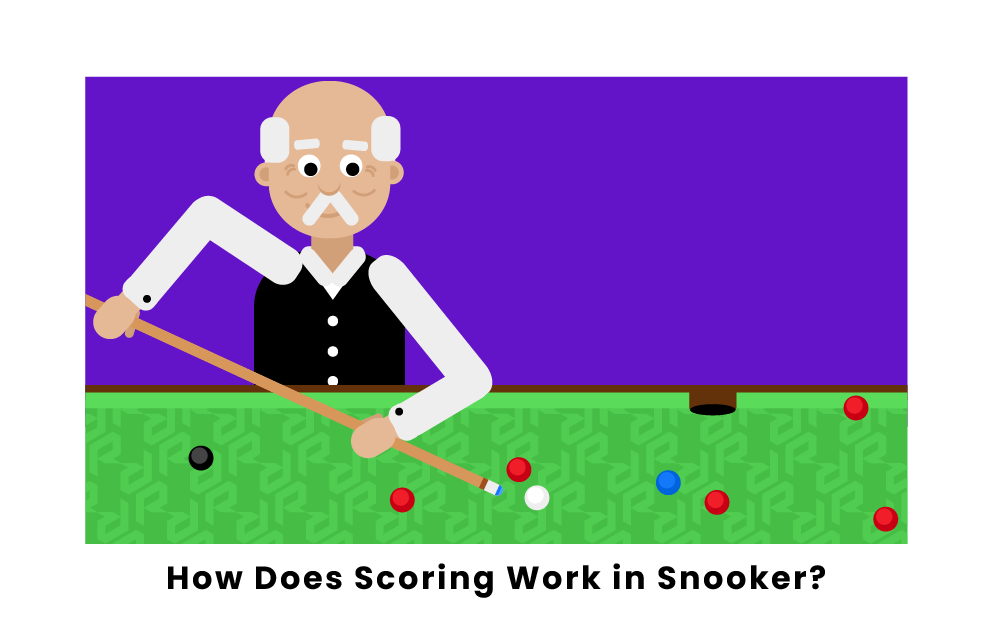 The objective of snooker is to sink colored balls into pockets. On the surface, snooker looks quite similar to other pool or billiards games. However, there are many distinct differences between how snooker and these other games are played.

Firstly, when considering these differences, snooker tables are a few feet larger than their billiards counterparts, measuring around 12 feet in length and six feet in width. A typical snooker match uses 15 red balls and seven other colored variants.

Interestingly, the name “snooker” derives from a specific situation in the game. A snooker occurs when a player, typically one who cannot complete a shot easily, intentionally blocks another player by striking the cue ball into a difficult position, one that could cause the opponent to foul.

Two of the core components of snooker are striking and potting. Simply put, striking occurs when a player uses a cue to strike the cue ball with the intent of hitting one of the other colored balls on the table. Potting occurs when the colored ball enters a pocket after it is struck by the cue ball. These two components are essential for understanding the nuances of snooker’s rule system.

In snooker, a player may score by potting colored balls, with each color holding a different point value. Red balls are worth one point, a yellow ball is worth two points, green is worth three, brown is worth four, blue is worth five, pink is worth six, and black is worth seven.

A player must start by potting a red ball. If successful, they can choose to aim for any of the colored balls on their next shot, no matter what point value it has. However, after potting a colored ball, they must repeat the original process and hit another red ball before they can hit a second colored ball. A player will continue their turn until they fail to pot a ball or commit a foul. If a colored ball is potted, it is replaced on the table, but red balls are not.

Once all the red balls have been potted, players must attempt to pot the colored balls in ascending order. This means they will start with yellow and end with black.

A player’s opponent may also score on a foul. Fouls made by the turn player award the opposing player a value of four points or more, based on the color of the ball that was fouled on. For example, if a foul was committed on the blue ball, the opponent will be awarded five points. Some common fouls in snooker include potting the cue ball or a ball of the incorrect color.

Winning a Frame in Snooker

Snooker matches are played in divisions known as “frames,” which is the term for a single game of snooker, which is played until one player has scored more points. Snooker matches, which are longer than games, usually have a predetermined number of frames, with some levels of play having matches played to 11, 15, or even 35 frames.

A snooker frame is won by outscoring your opponent. In order to win a frame, a player must pot balls and earn enough points to beat their opponent. The most points a player can score refers to what is known as the “maximum,” or a break of 147. This value describes the value of all of the snooker balls on the table combined.

If a player finds themselves in a defeated position during a frame, they may decide to attempt a handful of snookers in an attempt to cause their opponent to foul. If a player fouls, their opponent earns four or more points, and can theoretically use these points to form a comeback run.

How do you score in snooker?

To score in snooker, the player must pot, or sink, colored balls into a pocket on the table. Each of the seven colors (red, yellow, brown, green, blue, black, and pink) holds a value corresponding to a number. A player scores points by maneuvering around the table, lining up, and striking the cue ball into any of the colored balls on the table, resulting in them being potted. However, a player must pot a red ball, which holds a value of one, before and after any other color. Most commonly, players will choose to strike and pot a red ball, followed by the black ball, then red, then black, and so on until all of the red have been potted. Interestingly, a player can also score points if their opponent commits a foul.

What are the rules of snooker?

The rules of snooker are quite similar to other pool games, such as billiards. The objective of a snooker frame is to strike the cue ball into colored balls, sinking them into a pocket in order to score enough points to outscore an opponent. A player must hit the red ball before potting a colored ball, until all of the red balls have been potted. Players flip a coin to decide who starts the first frame of a match. If a player fails to pocket a ball, the turn is passed to the next player. If a player fouls, their opponent receives points, and the turn is passed to the opponent. Once all of the snooker balls have been potted, the player with the most points wins the frame.

Do you have to call your shots in snooker?

Unlike in other pool games, such as the popular 8-Ball, snooker players do not need to call out any details of their intended shots. While you do not have to call every shot in snooker, you do need to pot balls in a particular order (i.e. red, color, red, color, and so on). If the reds and colors have been potted legally, then a player may proceed with play, not needing to call their intended shots.

Pages Related to How Does Scoring Work In Snooker?