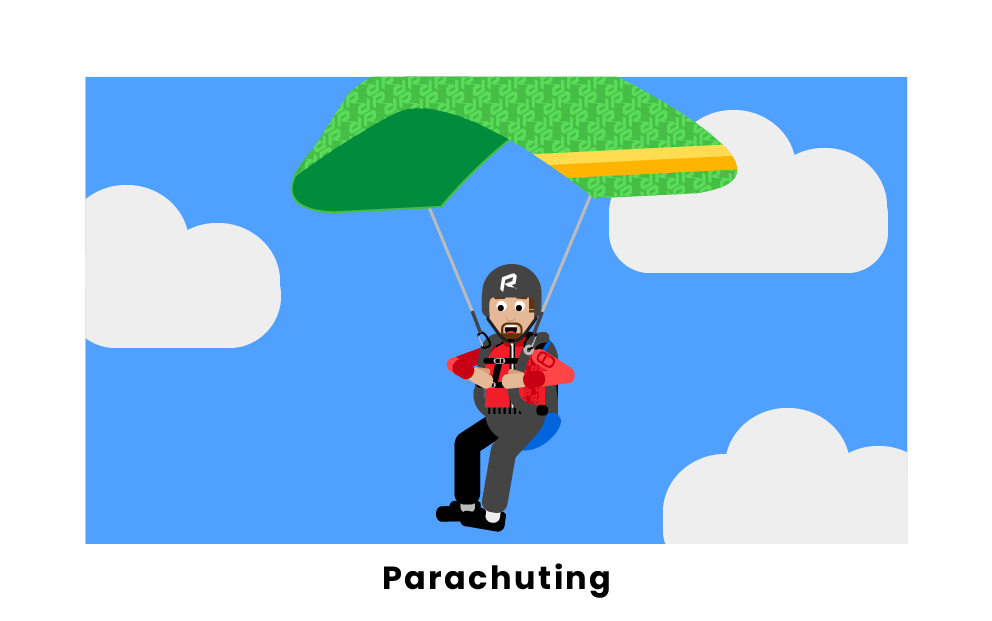 Parachuting is an adventurous sport involving free falling through the air while attached to a parachute. Parachuting is carried out from a 4,000 meter elevation, with individuals jumping and immediately deploying their parachute. It’s a thrilling and one of a kind adventure for those bold enough to take part.

Dating back as far as the 1100s in China, individuals would jump from cliffs to the ground with makeshift parachutes. A few centuries later, Leonardo DaVinci created the first blueprints of a parachute in 1485, but was not tested until 2000. In 1797, Andre-Jacques Garnerin was officially the first person to make a successful parachute descent using a canvas canopy and a small basket tied to a hot air balloon. Later, in 1919, Leslie Irvin was the first person to make a free fall jump, and soon after in the 1930s, it became a competitive sport. 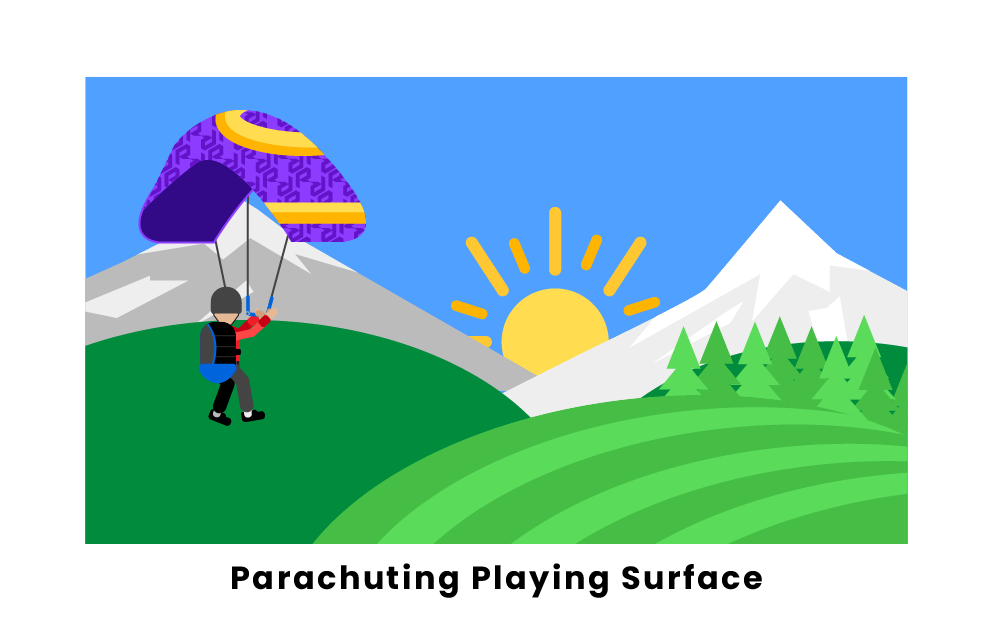 Parachuting involves jumping from a high point, such as a plane, helicopter, high cliff, or mountain. These elevated areas need to be about 10,000 feet above the ground for there to be ample time in the air to descend. Once the individuals have jumped and deployed their parachutes, they descend to the ground, which can be any area that has enough open space for parachuters to land. 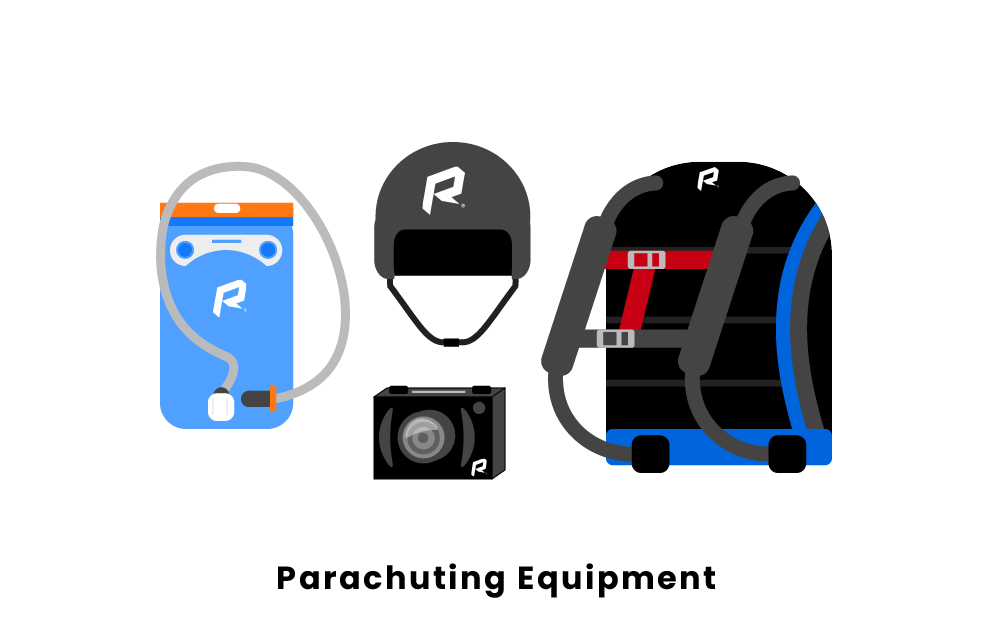 When parachuting, several pieces of equipment are needed to ensure that individuals who participate are safe and have a good experience. The most important pieces of equipment are a parachute and activation device for parachute deployment. Next, a pair of goggles and helmet help guarantee the parachuter is protected during their descent. Additionally, knowing the altitude is crucial in this sport, so having an altimeter will help determine when to deploy the parachute.

Here is the essential parachuting equipment you should have:

Parachuting is performed as a recreational activity as well as a competitive and extreme sport. The objective is the successful descent from a high elevated point to the ground via parachute. For competitive and experienced parachuters, objectives are more advanced as they perform acrobatic movements prior to landing on the ground. Parachuters may have skills ranging from tracking, free flying, wing suiting, and canopy work, in which they can maneuver their descent to the ground. 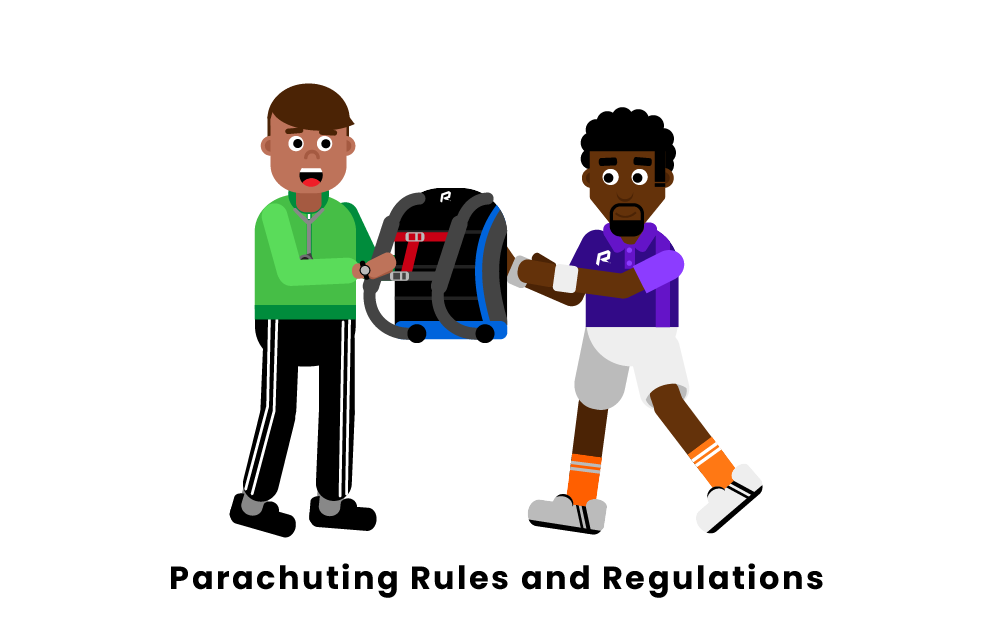 There are a set of rules and regulations regarding parachuting at all locations. The basic ones include specific age requirements, being that participants must be at least 18 years of age. Additionally, there are often weight limits capping at about 225 pounds and depends on other factors. Safety is everyone’s responsibility and it is required for all participants to review emergency procedures before the jump. Similarly, participants should always get their gear checked prior to jumping and be ready to perform any emergency procedures in the event of a malfunction.

Here are the most important parachuting rules you should know: 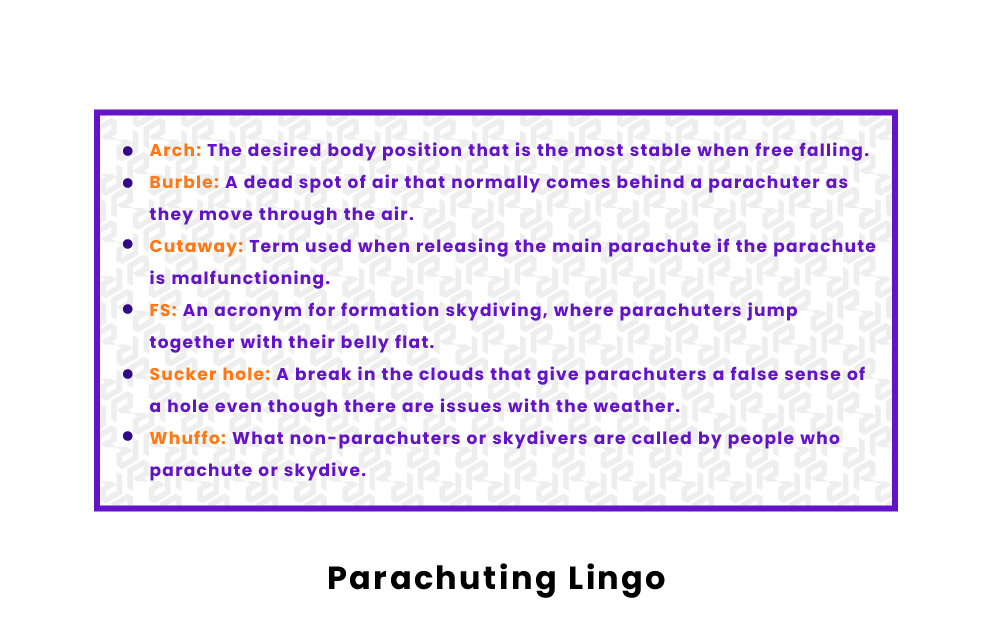 Here is the common lingo and slang in parachuting: 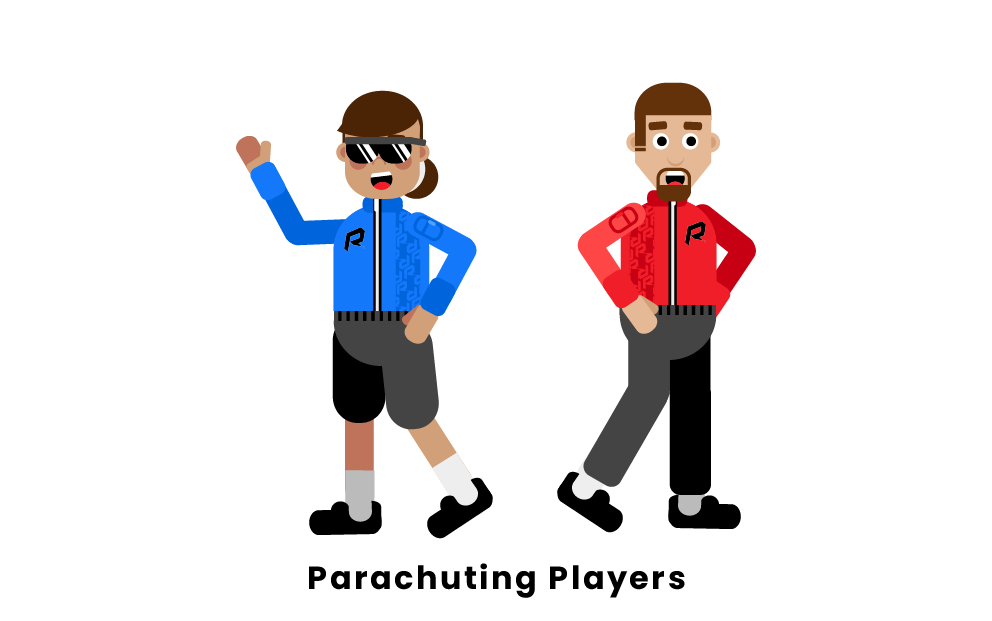 Professional parachuting is one of the few intergender sports in which females are more acclaimed than their male counterparts. These specific women were some of the famous pioneers and impactful people involved in making parachuting popular.

Here are the most famous parachuting players you should know:

There are only a couple of major leagues that are notable in the realm of parachuting. Often, skydiving and parachuting are used interchangeably, so the National Skydiving League is one of the most famous leagues. Additionally, the United States Parachuting Association (USPA) has a team of athletes that represent the U.S. in international competitions, cups, and events.

Here are the most popular Parachuting leagues you should know:

The United States Parachuting Association is an organization that conducts the National Parachuting and Skydiving Championships, which holds seven different competitions. The USPA oversees all competitive parachuting activities and works alongside the Federation Aeronautique Internationale which is in accordance to any international championships and competitions that are held.

Here are the most seven popular types of events in parachuting:

The risks involved in parachuting are quite low. There is 1 death in about every 500,000 parachuting jumps and according to the National Safety Council, someone is much more likely to die from getting struck by lightning than die from parachuting. There are chances of injuries when free falling, landing, and from parachute malfunctions, but these chances are very low.

How far up are you when in a parachute?

When parachuting, individuals are often at an altitude of about 10,000 feet and can go over 15,000 feet but will require oxygen use to avoid hypoxia. There are also options to go lower, between 7,500 and 8,000 feet.

How long are you in a parachute for?

A typical parachute ride lasts between five to seven minutes, with the freefall included and lasting up to 40 to 50 seconds. However, the time often depends on other various factors including altitude, weight, and equipment.

How old do you have to be to parachute?

In the U.S., the age requirements for parachuting is to be 18 years old or older.

Pages Related to What is Parachuting?