What is Banzai Skydiving? 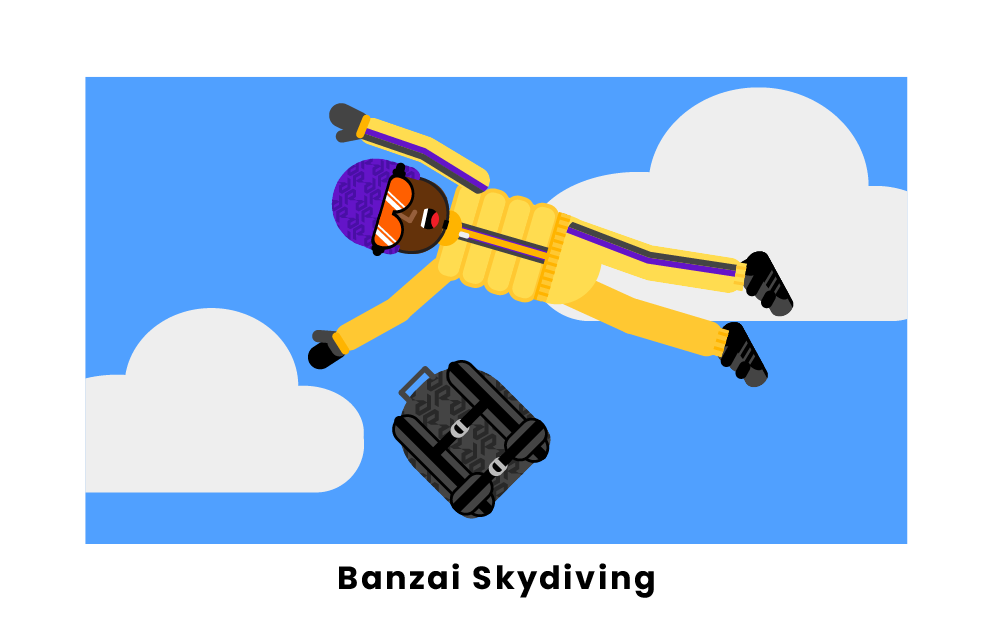 Banzai skydiving is an extreme discipline of skydiving. In Banzai skydiving, the jumper throws their chute out of the plane and then leaps without a backup as they then try to reach their parachute mid-air. The sport, while dangerous in nature, actually has no recorded deaths. Regardless of this fact, the sport is not formally recognized by the United States Parachute Association (USPA).

With no accreditation from a governing body, the sport has leaned on participants to record their jumps themselves, meaning that the goal of the sport is to enjoy the thrill rather than competition. The hobby was first documented by Yashuro Kubo back in 1985 but was not formally called banzai skydiving at first. On September 2, 2000, the Guinness Book of World Records recognized and accredited the longest banzai skydive to none other than Yashuro Kubo when he took 50 seconds before reaching his chute safely.

What is banzai skydiving?

Banzai skydiving is an adrenaline and thrill-focused sport with zero recorded casualties despite the dangers it may pose. The primary objective is similar to regular skydiving, where you leap from a moving plane roughly 9,000 feet in the air and aim to land on the ground safely. The twist with banzai skydiving is that the jumper leaves the plane without his parachute attached and attempts to retrieve it and put it back on while in mid-air.

What is the world record for banzai skydiving?

According to the Guinness Book of World Records, the current world record holder is Yashuro Kubo, a Japanese man who leaped from a plane 9,842 feet above the ground and went an entire 50 seconds before reattaching to his parachute and landing safely. Kubo set the banzai skydiving record on September 2, 2000, in Davis, California. The stunt was the first of its kind and gave birth to the sport as we know it today.

What equipment do I need to safely go banzai skydiving?

While banzai skydiving has no recorded casualties, that is only because only highly skilled and trained skydivers are typically allowed to attempt this feat. Outside of a plane, the only other equipment needed is a parachute, goggles, a helmet, and nerves of steel. Some divers have thrown their parachute out with it attached to a bungee cord for emergency use, but it is not always common practice. The sport is not safe for those new or inexperienced and should only be attempted by trained professionals.

Pages Related to What is Banzai Skydiving?