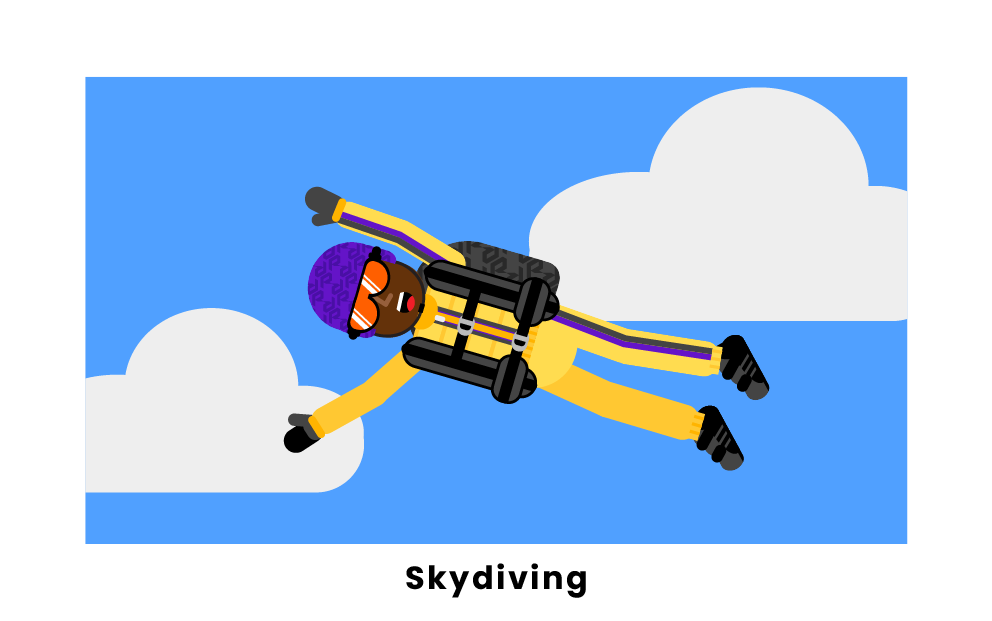 Although it may seem scary at first, skydiving is one of the most freeing and thrilling sports one can participate in. People have been skydiving since the invention of parachutes, rough forms of which can be traced back to 10th century China. The design for the modern parachute was invented in 1783 by Louis-Sebastien Lenormand, who also successfully parachuted from a hot air balloon. Modern skydiving as we know it became popularized after the development and use of advanced aircrafts and parachuting technology during World War II, which also left a large group of young men with the skills to teach and practice skydiving.

Participants can choose from a variety of parachuting styles to best fit their skillset and desired experience. Beginners typically start with tandem flying, which means jumping while harnessed to an instructor, and later branch out into freefalling to learn how to dive solo. As skydiving rose in popularity, new versions and spinoffs of the sport emerged, including cross-country skydiving, wingsuit flying, BASE jumping, and banzai skydiving. Skydiving without an instructor present requires a license granted by the United States Parachute Association (USPA).

Skydiving is an air sport in which divers, called pilots, jump from an aircraft thousands of feet in the air with parachutes that allow them to reach the ground safely. There are a few disciplines of skydiving, such as tandem flying, freestyling, and formation flying, to accommodate different tastes and experience levels. Due to the risk involved, pilots who wish to skydive solo without an instructor will have to earn a license from the United States Parachute Association (USPA).

What are the different types of skydiving competitions?

What equipment do I need for skydiving?

Skydivers have a main parachute, along with a backup, with steering lines connecting them to the backpack. The parachutes often have an automatic activation device. They also wear protective gear, including goggles, a helmet, and a jumpsuit. The altimeter, worn on the wrist, uses barometric pressure to measure altitude and inform pilots when it is time to deploy the parachute. Tandem skydivers will also have a harness connecting themselves to their instructor or partner.

Pages Related to About Skydiving (Parachuting)