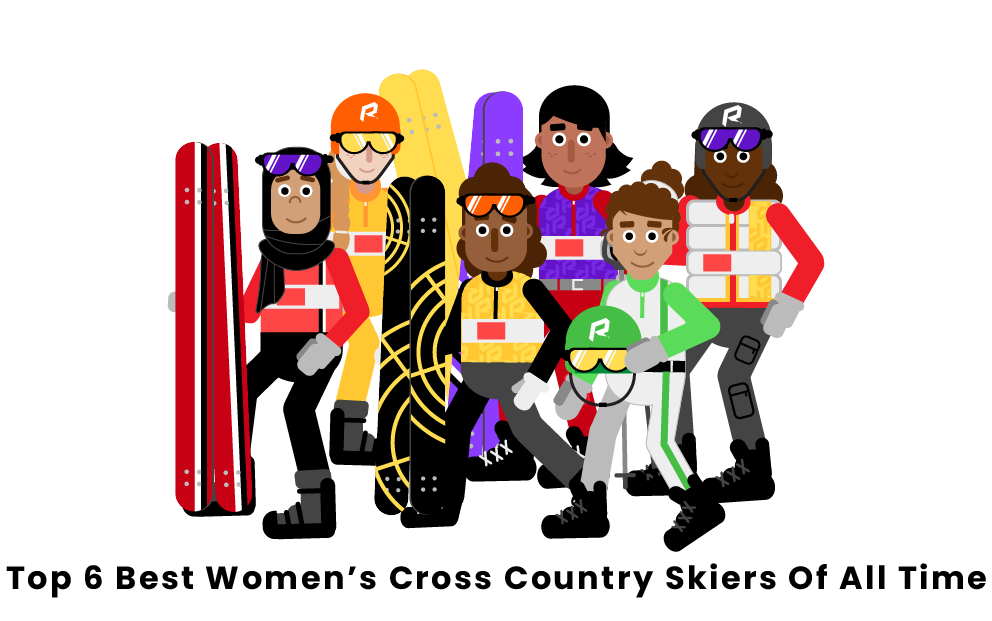 Cross country skiing is one of the most physically demanding and challenging Winter Olympic sports. It made its debut in the 1952 Olympic Winter Games and has continued its legacy of great athletes ever since. Read on to learn more about the top six best women’s cross country skiers of all time.

Who are the best women’s cross country skiing athletes of all time?

Growing up on a farm in Norway, Marit Bjørgen learned to ski at an early age and competed as a cross country skier for the first time at nine years old. Since starting her illustrious professional career in 1999, Bjørgen has become the most successful Winter Olympian of all time. The Norwegian product won her record 15th medal at the 2018 PyeongChang Winter Games, in which she also won the most medals of any athlete who attended, with five. Bjorgen also has 18 gold medals in the World Championships, 12 of which came from individual events.

Known for being on the smaller side of most female cross-country skiers, Stefania proved people wrong and became one of the best at her sport. She was just 5’ 2” and weighed 99 pounds but is widely considered one of the better endurance skiers of her time. Born in Vinadio, Italy, Belmondo started skiing in the local mountains at the age of three. She made her professional debut in 1987 and joined the Italian national team the next year. Over the course of her career, she has won numerous events, including multiple Olympic medals and World Championships. She has also demonstrated consistency between competitions, having won a gold medal in the 15 km race at both the Olympics and the World Championships. Belmondo had lots of success at the World Cup as well and even won gold in a sprint in 1997.

Raisa Smetanina grew up in a harsh winter environment deep in the Ural mountains of Russia. Smetanina won medals at five different Olympics and was her home country’s champion 21 times. She began her professional career in 1967 and later competed for the Soviet national team starting in 1972. She won 10 Olympic medals throughout her career: four gold, five silver, and one bronze. She is also the oldest female gold medalist in Winter Olympic history, winning the 4x5 km relay at the 1992 games at age 39.

Lyubov Yegorova was a four-time World Champion and nine-time medalist at the Olympics, winning gold six times. Growing up in Siberia, Yegorova became comfortable with winter sports, specifically cross country skiing, at a young age. She made her debut on the World Cup circuit in 1987. She dominated over her first two Olympic appearances earning a medal in nine of the ten events she participated in, including six gold medals. Yegorova has also had success at the World Championships, adding another four gold medals to her resume.

Born in Tarendo, Sweden, Charlotte Kalla began skiing at a young age with her grandfather and realized that she loved the sport. She would go on to become both an Olympic and World Champion for Sweden. She is the country's first gold medalist in cross country skiing since Toini Gustaffson in 1968. She won two medals in 2010, three in 2014, and four in 2018, increasing her total by one in each appearance. She won gold in the 15 km skiathlon in 2018, the 4x5 km relay in 2014, and the 10km freestyle in 2010. Kalla is also a 13-time medalist at the World Championships, winning three gold, six silver, and four bronze.

Välbe was one of the premier names in the sport during the 80s and 90s. A three-time Olympic gold medalist in the 4x5 km relay, she also won four bronze medals at the 1992 Olympics. At the 1997 World Championships, she swept all five female cross country events, winning gold in all. This is widely considered her best performance. She was overall champion at the World Cup in 1989, 1991, 1992, 1995, and 1997. To top it all off, she finished below the top three only twice in her eleven years participating in the World Cup. These came in her first and last year of participation in 1987 and 1998, respectively.

Who is the greatest women’s cross country skier of all time?

The most successful and accomplished women’s cross country skier of all time is Marit Bjørgen, in large part because of the 15 medals she has won at the Olympics. These medals include eight gold, four silver, and three bronze. She is widely considered the most successful Winter Olympian of all time. Bjørgen has participated in five different Olympics and has won medals in each. She won the most medals of anyone at the 2018 Winter Olympics with five and has been one of the most consistently dominant forces in women’s cross country skiing for over a decade.

Who was the oldest female cross country skier to win a medal at the Winter Olympics?

Hilde Pedersen is the oldest woman to win a medal at the Winter Olympic Games. She did so by winning bronze in the 10km race at the 2006 Olympics in Turin, Italy. Pederson was 42 years old at the time, making this an incredible feat. She beat out some of the youngest and most talented skiers in the world for a bronze medal at a very advanced age.

Who holds the record for the most women’s FIS Nordic World Ski Championship gold medals?

Marit Bjørgen holds the record for the most women’s FIS Nordic World Ski Championship gold medals. Bjørgen won 18 gold medals in the event from 2003-2017, which is four more than the next closest competitor. Twelve of those medals came in individual events, while six were part of a team effort. Overall, Bjørgen has 26 medals in the competition, including five silver and three bronze. The next closest skier is Yelena Välbe, who won 14 gold medals and three silver in the event for a total of 17.