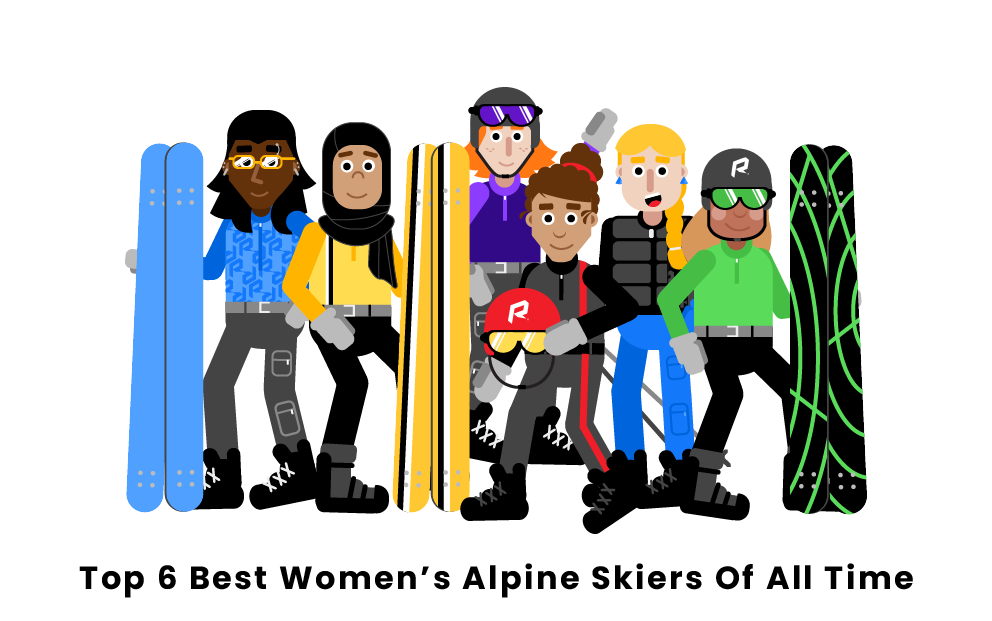 Alpine skiers are some of the most popular athletes in women’s snow sports, particularly the Winter Olympics. This list explores some of the best female alpine skiers of all time, from pioneers like Annemarie Moser-Pröll to the greatest of all time, Lindsey Vonn, and her likely challenger Mikaela Shiffrin.

Who are the best women’s alpine skiing athletes of all time?

Lindsey Vonn is one of the most successful athletes in all of alpine skiing and is considered one of the greatest skiers of all time. A former World Cup alpine ski racer for the US Ski Team, she won more World Cup Crystal Globe titles in her career than any other skier, man or woman. Vonn grew up in Minnesota, but her family relocated to Colorado when she was a teenager so she could focus on skiing. Ranked first in the overall ladies’ super rankings of alpine skiers, Vonn won four overall World Cup titles and three Olympic medals, competing in the 2002, 2006, 2010, and 2018 Winter Games.

Considered to be the best female ski racer of all time by many at one point, Janica Kostelić grew up in a skiing family in Zagreb, Croatia. Her older brother was a fellow ski racer, and her father served as her trainer; the family traveled around Europe with her as she competed as a teenager. She competed in the Nagano Games at only 16 and won her first overall World Cup title at 19. While skiing in the 1998, 2002, and 2006 Olympics, Kostelić earned six medals, four of them gold. In 2002, she became the only woman to win three alpine skiing gold medals in a single Winter Games.

Mikaela Shiffrin is one of the most dominant active professional athletes in the world, and her list of accomplishments as a skier is still being written. She was born in Vail, Colorado, to parents who were both former ski racers. Shiffrin began competing as a teenager and quickly showed her prowess in slalom. The 2018-19 season defines Shiffrin’s legend: she won 17 of the 26 World Cup races she competed in, setting a record for men and women. Competing in the 2014 and 2018 Olympics, Shiffrin has won three medals. She hopes to add to the medal count in the future, with a personal goal of five golds in a single Winter Games.

Annemarie Moser-Pröll was the controlling force in women’s alpine ski racing in the 1970s. She grew up in Kleinarl, Austria, and joined the Austrian national ski team as a teenager. Moser-Pröll quickly found success on the international circuit, winning her first overall World Cup title in 1971. In an unparalleled show of dominance, she won a record-setting 11 consecutive downhill races between 1972 and 1973. Olympic gold eluded Moser-Pröll until the end of her career. She won two silvers in 1972 and missed the 1976 Games while caring for her ailing father. Finally, in 1980, she achieved Olympic gold in downhill at Lake Placid.

Tina Maze is the most decorated Slovenian alpine ski racer of all time. She was born in the ski town of ​​Crna na Koroskem and started skiing at the age of three. In high school, she made the women’s B ski team, placing second and first in her first two races. Maze quickly established herself as a giant slalom specialist, earning silvers in giant slalom and super-G at Vancouver in 2010, then Slovenia’s best Olympic finish. After winning 26 World Cup titles and the overall title in 2013, she finished her career with double gold medals at the Sochi Winter Olympic Games in 2014.

The first person ever to win a World Cup alpine ski race in each of the five disciplines, Anja Pärson was Sweden’s most successful female skier. Born in Umeå, Sweden, Pärson was coached by her father at a nearby ski club frequented by legendary ski racer Ingemar Stenmark, who was her idol. She achieved early success, winning her first World Cup race at 17 and a gold medal in slalom at the World Championships the following year. Anja Pärson competed in the 2002, 2006, and 2010 Winter Games, reaching the podium in each one for a combined six Olympic medals.

Who is the greatest women’s alpine skier of all time?

The greatest women’s alpine skier of all time is Lindsey Vonn. One of the most decorated alpine skiers of all time and the most successful American woman in alpine skiing, she maintains the record for the most World Cup victories for a woman and a spot atop the women’s super rankings. However, Vonn retired in 2019, and Mikaela Shiffrin, who had a record-setting season in 2018-19, is still competing and on pace to eclipse Vonn’s achievements.

Christl Cranz has the most total FIS Alpine World Ski Championship medals, with 15, 12 of them gold and three silver. Cranz was a German alpine ski racer who dominated the sport in the 1930s, winning her medals in five short years. She represented Germany in the 1936 Olympics and served as a pioneer of the sport. Three women tied for second place with 11 medals apiece: Marielle Goitschel, Anja Pärson, and Mikaela Shiffrin.

What are the biggest alpine skiing events in the world?

The biggest alpine skiing events in the world are FIS Alpine Ski World Cup competitions, particularly the biannual championships. The Olympics are an even bigger event and are considered the premier alpine skiing competition in the world. However, it is held only every four years, while the World Cup is held every year. Some consider a World Cup title more important than an Olympic medal because a skier must dominate over an entire season instead of a single race.