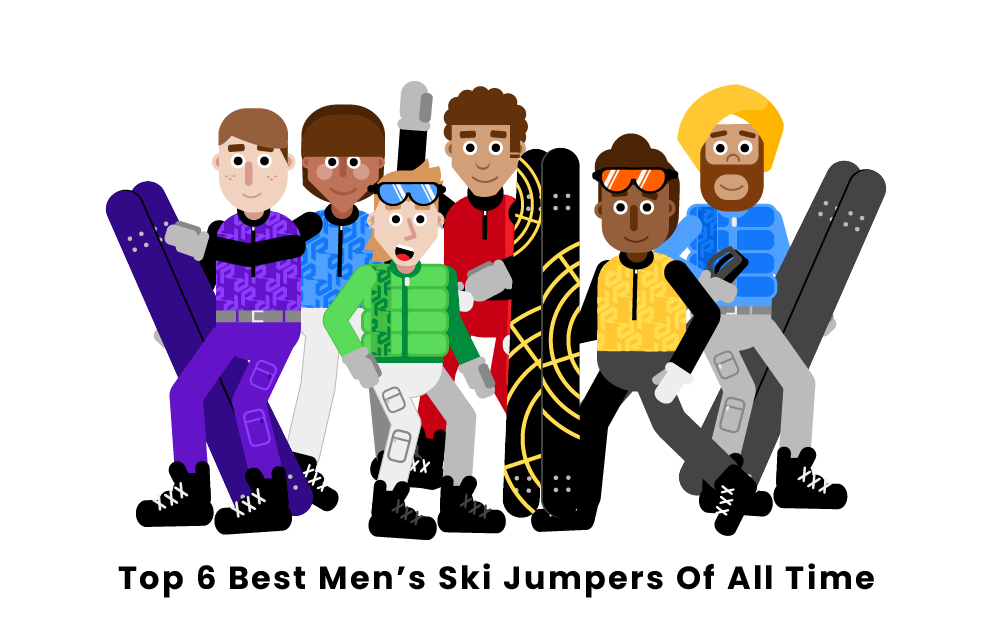 Ski jumping competitions have been held around the world since 1866 and have been part of the Winter Olympics since their inception in 1924. Over the years, the sport has evolved by developing new techniques that allow the world’s best ski jumpers to travel over 100 meters in the air. Keep reading to learn about the top six best men’s ski jumpers of all time.

Who are the best men’s ski jumping athletes of all time?

Although Matti Nykänen’s career was short due to his struggles in dealing with the fame that accompanied his success, he still earned the title of the greatest ski jumper of all time. During his Olympic debut in the 1984 Sarajevo Games, he set the all-time record for the largest margin of victory on the large hill event. He won by 17.5 points with two incredible jumps. In the following 1988 Winter Olympic Games Games held in Calgary, he continued his stellar performance by becoming the first ski jumper to win multiple gold medals in a single Olympic Games. That year he won the large hill, normal hill, and first-ever team event.

Simon Ammann secured his place in ski jumping lore when he surprisingly won both the large and normal hill gold medals at the 2002 Winter Olympics in Salt Lake City. Winning gold in both events at the same Olympic Games had only ever been done by Matti Nykänen and was shocking to the ski jumping community. Ammann had never won a major international competition before the 2002 Olympics and had recently finished sixth at that year’s Four Hills Tournament. In 2010, at the Vancouver Olympics, Ammann repeated his extraordinary feat by sweeping both individual events at the Olympics for a second time, becoming the first to ever achieve that honor.

Kamil Stoch, known as the “Flying Pole,” had a historic career filled with impressive victories on the Olympic and World Cup stages. He became the third man to sweep both individual events at the Olympics by capturing the large and normal hill gold medals at the 2014 Sochi Games. Later that year, he also won the FIS World Cup for the first time. He followed that incredible performance by becoming just the second man ever to win back-to-back golds in the large hill event at the 2018 PyeongChang Olympics. Outside of the Winter Olympics, perhaps his greatest achievement is becoming just the second man ever to win all four stages of the Four Hills event in the 2018 World Cup.

Adam Małysz is another notable men’s ski jumper, in large part because of his four Olympic medals. In fact, his Olympic career could have been even more impressive if he didn’t go against Simon Ammann at both the 2002 and 2010 Olympic games. Małysz was at the top of his game at both events, finishing just behind Ammann in both the large and normal hill events, earning four medals. While his Olympic experiences did not result in any gold medals, Małysz made a mark on the sport in the World Cup circuit by winning 38 events throughout his career. He became known as the Magician, and his popularity in his home country of Poland helped turn ski jumping into the country’s national sport.

Gregor Schlierenzauer is the most accomplished man in the history of the ski jumping World Cup. His record-setting 53 individual victories include another record in his 13 victories in 2009, the most ever in a single season. He also sits atop the record book with the longest jump ever recorded at 253.5 meters, tied with Stefan Kraft. Schlierenzauer became a professional when he was just 15 years old and won his first World Cup event just a year later. In 2010 at just 20 years of age, he won his first and only gold medal at the Vancouver Olympics in the team large hill event.

Morganstern began his career at the age of 16 and quickly became a star in the sport of ski jumping. As a teenager, his team won four gold medals in the Nordic World Ski Championships, and he won his first individual World Cup event. In 2006, he became one of a select few men to win multiple gold medals in ski jumping in the same Olympics, when he won the individual and team gold medals in the large hill events. The following year he won the first six World Cup competitions of the season, which stands as an all-time record.

Jens Weißflog is a former German ski jumper who competed in the 1980s and 90s. He was nicknamed “flea” due to his light stature compared to the rest of his competition. The first of his four Four Hills titles came when he was only 19-years old. In that same year, Weißflog took home a gold and silver medal in the 1984 Winter Olympics in Sarajevo, Bosnia and Herzegovina. Throughout his career, Weißflog went on to win 33 individual World Cup competitions and two more Olympic gold medals. While some ski jumpers have achieved a similar level of success as Weißflog, his ability to compete at a high level for over 12 years is what sets him apart from the rest.

Who is the greatest men’s ski jumper of all time?

Matti Nykänen is the greatest men’s ski jumper of all time because of his long list of accomplishments and his status as a pioneer for the sport. He has won five Olympic medals (four gold and one silver) and was the first man to ever win multiple gold medals in ski jumping in the same Olympics. He also holds the record for the largest margin of victory in the history of the Olympic large hill event. Aside from the Olympics, Nykänen has won nine World Championship medals and five World Cup overall medals.

Who is the youngest male ski jumper to win an Olympic gold medal?

Toni Nieminen became the youngest athlete ever to win a gold medal in Winter Olympics history at the age of 16 years and 259 days. He helped the Finnish team win the team large hill event and then followed that performance with an individual large hill victory. These record-setting victories occurred at the 1992 Albertville Olympic Games. He also managed to win the bronze in the individual normal hill event that year.

What are the biggest ski jumping events in the world?

The biggest ski jumping events in the world are the Winter Olympics and the annual Four Hills tournament. The Four Hills tournament is held in Germany and Austria at four different locations, Oberstdorf and Garmisch-Partenkirchen in Germany, and Innsbruck and Bischofshofen in Austria. These events are also a part of the Ski Jumping World Cup circuit. These two competitions see the world’s greatest ski jumpers compete, and victories in these competitions serve as key milestones on resumes of the sport’s legends.