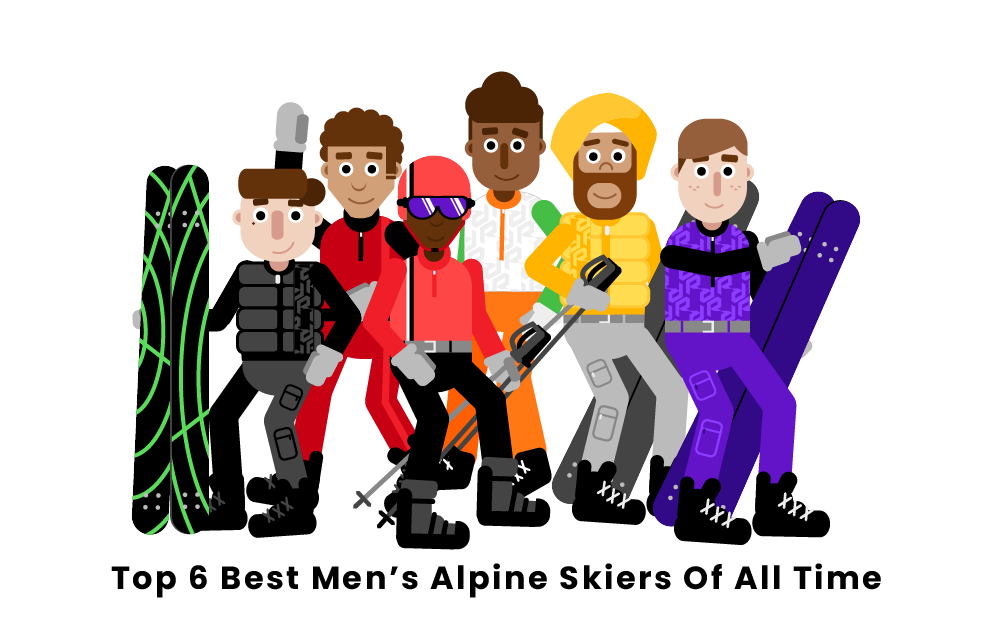 Alpine skiing is a very popular winter sport that began to evolve at the end of the 19th Century and developed throughout the 20th Century. Featuring races down long, steep slopes with wide turns, it is a sport that requires great control and coordination. Alpine skiing’s popularity led it to its inclusion as a sport in the Olympic Winter Games in 1936, where it has remained to this day. Many famous alpine skiers have tackled Olympic and world-famous courses, winning medals and championships. Below are the top six best men’s alpine skiers of all time.

Who are the best men’s alpine skiing athletes of all time?

Hailing from Sweden, Ingemar Stenmark is widely considered one of the greatest competitors in the history of alpine skiing. Stenmark began training to ski at the age of five and was only eight years old when he won his first National Championship in 1964. At the age of 13, he began to train with the Swedish Junior National Team, winning his first World Cup Race in 1974 at the age of 18. In 1979, Stenmark had an incredible competitive skiing season and broke the season record of French skier Jean-Claude Killy by winning 13 individual World Cup Races (Killy had previously won 12 races in one season).

Stenmark made his Olympic debut at the 1976 Winter Games in Innsbruck, Austria, where he won the bronze medal for the giant slalom event. Four years later, at the 1980 Lake Placid Games, Stenmark successfully won two gold medals, one in the slalom event and the other in the giant slalom. Stenmark became known as a slalom specialist and expressed his preference for slalom events over straight downhill skiing, as he considered himself a perfectionist and enjoyed the greater challenge of the slalom events. Stenmark continued to win World Cup Titles for slalom and giant slalom after his Olympic victories and retired from skiing in 1989.

The most decorated alpine skier in Olympic history, Kjetil André Aamodt, is known for his versatility and success on the ski course. With four Olympic titles and five World Championships, he has earned many medals in his long career, which spanned the years from 1989 to 2006. He first brought attention to himself a year after the start of his career, in 1990, when at the age of 19, he either won or finished in second place in all of the five events at the Junior World Ski Championships. Aamodt and his teammate, fellow Norwegian skier Lasse Kjus, won a combined ten of the 15 medals at the competition. The following year, Aamodt earned a silver medal at the senior giant slalom event of the Junior Championships, but his burgeoning career was interrupted later in 1991 by a bout of mononucleosis.

With six Olympic medals in alpine skiing, Bode Miller has won more Olympic medals in the sport than any other male American skier. Miller was born in Easton, New Hampshire, in the heart of New England’s White Mountains. He was homeschooled until the fourth grade and was often taken by his mother to her workplace at Cannon Mountain, where he was left under the care of the ski school staff. It was there that Miller began to practice skiing, which he began to perform competitively at the age of 11. Miller was not only a natural athlete in skiing but other sports as well, earning all-state honors in high school for both soccer and tennis, while golfing as a hobby. However, he decided to focus on skiing, even though he was also a burgeoning snowboarder.

Miller’s Olympic debut came at the 1998 Winter Games in Nagano, Japan, where he did not win a medal. A frightening crash at the 2001 FIS World Ski Championships tore the ligaments in Miller’s left knee, threatening to ruin his career, but he staged a successful comeback and returned to the sport for the 2002 Winter Games in Salt Lake City, Utah, where he won two silver medals, one in the giant slalom and the other in the combined event. Thereafter, his career only improved, resulting in two gold medals at the 2003 World Championships (the first time an American skier had done so) and three U.S. National Titles in the same year. In 2004, Miller received six World Cup wins and the giant slalom World Cup Title, while in 2005, he became the first-ever World Cup skier to win the first three races of a season, and claimed the overall championship in the same year. Miller won no medals in the 2006 Winter Olympics, and after a brief stint away from the U.S. Ski Team, he returned for the 2010 Vancouver Games, where he won three Olympic medals: a gold, a silver, and a bronze. Miller also won bronze at the 2014 Sochi Games, becoming the oldest Olympic alpine skier to ever medal. Over the next three years, injuries caused Miller’s career to wane, and he eventually retired from skiing in 2017.

A charismatic and skilled skier, Italian Alberto Tomba is notable for being the first-ever alpine skier to win medals at three separate Olympic Games. Born near Bologna, in the valley south of the Alps, Tomba considered several different sports in his youth before settling upon skiing as his desired career. Once he had chosen the sport, he became well-known for his aggressive action-packed style of skiing, which earned him the nickname “Tomba La Bomba” (“Tomba the Bomb”). At his debut Olympics, the 1988 Calgary Winter Games, Tomba had an exciting and remarkable introduction to the skiing world. He won two events, the giant slalom, and the slalom. Four years later, he successfully earned medals in both events yet again, earning another gold in the giant slalom to become the first Olympic alpine skier to win the same event twice and gaining a silver in the slalom event.

Tomba managed a second Olympic first in the 1994 Lillehammer Games. His early start in the games was surprisingly poor, including a missed gate in the giant slalom and a disappointing 12th-place start after the first round of the slalom event. However, on his second run in the slalom, Tomba skied hard and expertly, earning himself a silver medal, and thus also becoming the first-ever Olympic alpine skier to medal at three different Olympic Games. In the peak of his career, Tomba was considered the dominant alpine skier for years, winning 50 World Cup Races to become the second-ever alpine skier to do so, and securing the World Cup Championship in 1995, becoming the first slalom specialist to win the overall title since Ingemar Stenmark. After a more disappointing performance at the 1998 Nagano Games, in which he did not medal, followed by his 50th successful World Cup Race, Tomba retired from skiing.

A teammate of fellow Norwegian skier Kjetil André Aamodt, Lasse Kjus overcame incredible odds to pursue his skiing career after it was nearly derailed early in his competitive years. In 1991, during training exercises, Kjus sustained a dangerous injury during a crash, which tore the nerve in his left deltoid muscle. The injury made Kjus’ left arm nearly useless, which would make skiing almost impossible, but he was determined to return to the slopes and trained his surrounding muscles to do the work that his deltoid could no longer do. After this intense training, Kjus successfully competed at the 1994 Lillehammer Winter Olympics, where he achieved his goals by winning gold in the combined event, part of a Norwegian sweep of the entire alpine skiing medal podium that included his teammate Aamodt, and thrilled the Norwegian fans.

In 1998, Kjus returned to the Olympics, this time in Nagano, Japan, where he became the first Olympic alpine skier to earn two medals in one day, winning a silver medal in the downhill on the morning of February 13th and then another silver in the downhill combined later that afternoon. The following year, Kjus earned another incredible feat, gaining a medal in every one of the five alpine events at the 1999 World Championships, among them two gold and three silver. In 2002, Kjus participated in the Salt Lake City Winter Olympics, acquiring a silver medal in the downhill and a bronze in the giant slalom. In his final Olympics, held at Turin in 2006, Kjus did not medal.

Another dominant alpine skier, Marc Girardelli helped put his home country of Luxembourg on the Olympic map by participating in three Olympic Games. Though he was officially born, raised, and trained in Austria, Girardelli chose to represent Luxembourg for his skiing career. This earned him the nickname “the Austro-Luxembourger.” In his youth, he won the prestigious Topolino Race, considered the top international competition for young skiers. Through the mid-1980s and 1990s, Girardelli was known for his success in the Olympics, the World Skiing Championships, and the Alpine Skiing World Cup circuit. He regularly faced Switzerland’s Pirmin Zurbriggen in the speed events and routinely challenged Italy’s Alberto Tomba in the technical disciplines.

Girardelli became known for his excellence as an all-around skier, performing well in all five alpine skiing disciplines (downhill, slalom, giant slalom, super-giant slalom, and combined), rather than just one. Throughout his career, he won the World Cup overall title five times, two Crystal Globes in the downhill event, three in slalom, another in the giant slalom, and four in the combined event. At the Olympic Games, Girardelli debuted in the 1988 Calgary Games, but had to wait four years to earn a medal. He impressed in 1992, where he won two silver medals at the Albertville Games, one in the super-giant slalom and a second in the giant slalom.

Hermann Maier is yet another legendary alpine skier, hailing from Austria. Over the course of his career, Maier was remarkably dominant. His career resume features four Olympic medals, two of which were gold, six FIS Alpine World Ski Championships, three of which were gold, and nearly 100 World Cup podium finishes. Maier’s efforts were mainly split between downhill, super-g, and giant slalom. Maier won a FIS Alpine World Ski Championships gold medal in each of these disciplines, to go along with an Olympic gold medal in super-g and giant slalom. His career stretched from 1996 to 2009, with plenty of success found in between.

Jean-Claude Killy is a French former alpine skier who helped pioneer the sport on an international level. He dominated the sport in the 1960s and most notably took home three Olympic gold medals in the 1968 Winter Olympics in his home nation of Grenoble, France. In 1967 and 1968, Killy took home victories in the first two FIS Alpine Ski World Cups. During his most dominant years, Killy mainly competed in the downhill, giant slalom, and slalom disciplines. Giant slalom was arguably his most successful discipline, winning titles in both of his World Cup years. Following his massive success in the late 1960s, Killy retired from competitive skiing in order to pursue a variety of business and television ventures.

What men’s alpine skier has the most Olympic gold medals?

Norway’s Kjetil André Aamodt is the most decorated Olympic men’s alpine skier in terms of gold medals, with four Olympic golds across five Olympic Games. Aamodt won gold in the super-giant slalom event at three Olympics, in 1992, 2002, and 2006; in 2002, he also won gold in the combined event. In terms of overall medals, Aamodt is the most decorated alpine skier in Olympic history as well.

What men’s alpine skier has the most FIS Alpine World Cup wins?

Ingemar Stenmark is the men’s alpine skier with the most FIS Alpine World Cup wins. Over his long career, which spanned from 1989 to 2006, Stenmark won 86 World Cup Races, and also earned 43 silver medals and 26 bronze medals in the World Cup circuit. Stenmark has also won three Olympic medals, two of them gold, and six World Championship medals, three of which were gold.

What country has the most Olympic gold medals in alpine skiing?