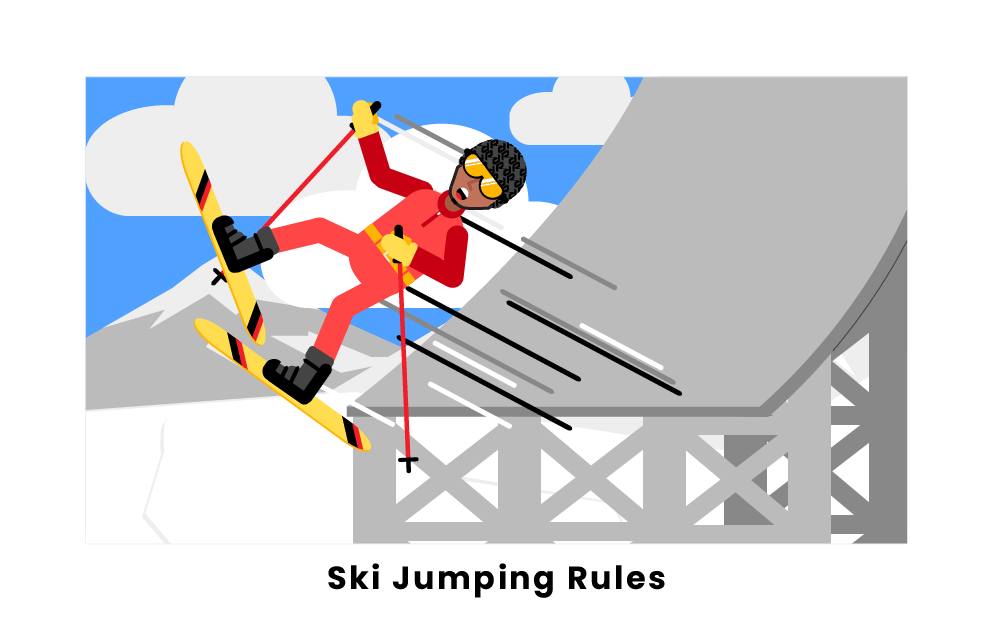 Ski jumping is one of the most entertaining winter sports, with athletes jumping over 200 meters at times. The sport has specialized rules to ensure fair competition and safety for all participants. Whether you are just learning to ski jump or watching it in the Olympics, keep reading to learn about the basic rules of ski jumping.

What are the most important rules of ski jumping?

There is no weight limit to participate in ski jumping. However, ski jumpers at lower weights must use shorter skis to reduce the aerodynamic lift they receive since lighter athletes can jump further. Under this rule, there is a requirement to be eligible for the maximum ski length. Athletes prefer longer skis because they allow for further jumps. In order to be eligible to use the maximum ski length of 146 percent of the jumper’s height, the jumper must have a body mass index of at least 18.5 without equipment, or 20.0 while wearing equipment. This rule was implemented to ensure that the weight of jumpers does not unfairly affect the outcome of their jumps.

A ski jumping hill is made up of multiple components of different lengths and inclines. The beginning of the hill consists of the starting point, the inrun, and the takeoff point, where the jumper begins the jump and gains speed before entering the air at the takeoff. The first part of the landing hill is called the knoll and runs to the “P-point.” The P-point marks the end of the knoll and the beginning of the landing area; it is the steepest part of the hill that runs to the “K-point.” The K-point is where the landing hill begins to flatten out for the stopping area. Jumpers attempt to reach the K-point and are rewarded additional points for distance after the K-point.

Ski jumping has a specific set of regulations regarding player equipment. Bindings connect the skis to the boots and must be parallel to the direction the skier is traveling, as well as connect the boots to the middle portion of the skis, so no less than 57 percent of the ski is in front of them. The skis themselves can be no longer than 146 percent of the jumper’s height, given they meet the BMI requirements. Only the front of the boot is required to be locked into the skis, allowing the jumper to lean forward and backward. However, a connection cord is needed on the back of the boot to prevent the jumper from falling off. Additionally, the jumping suit must meet the given thickness and air permeability guidelines.

In ski jumping, rules are in place to ensure safety amongst all competitors. In terms of equipment, all jumpers must wear a helmet to protect against head injuries. Regulations on ski length and the position of ski bindings have been implemented so athletes use safe equipment for the jumps they attempt. In certain conditions, the judges may lower the starting position to prevent overjumping, which can result in serious injury. Over the years, jump hills have also been altered for safety precautions to make them more contoured. This ensures that the jumper is typically no more than 3 to 4.5 meters off the ground.

Ski jumping is scored on the basis of both distance and style, whereas ski flying is scored based on distance alone. Points based on distance are allocated to jumpers in a system that rewards 60 points for a successful jump to the K-Point and additional points for every meter landing beyond the K-Point. The amount of points added for exceeding the K-Point is dependent on the discipline, with an extra 2 points per meter added for small hills and 1.8 points per meter on normal hills. Style points are given based on whether or not the jumper meets the standard technique for factors such as flight, landing, and outrun. A perfect technique would gain 20 additional style points from each judge. However, judges can deduct points for errors in style and technique, such as not maintaining the proper body positioning during a jump, touching the ground with a hand during landing, and not landing with one foot before the other.

Ski jumpers aim to land at the K-Point or beyond. However, landing can occur anywhere on the hill after the knoll, but judges will assess point reductions if they land before the K-Point. The hill’s steepness in the landing areas is designed to absorb most of the shock on the knees and hips from making contact with the ground. Jumpers should land in the telemark position, with one ski further forward than the other; this is also an important scoring factor. After landing, the slope levels off in the areas after the K-Point; along with turning the skis to reduce momentum, the jumper moves to a safe stop.

The K-Point is the inflection point on the hill where the landing area begins to flatten out. Jumpers attempt to reach the K-point on their jumps. Reaching the K-point earns a jumper 60 points on its own, and exceeding the K-Point earns additional points for every meter beyond, depending on the event. If a jumper fails to reach the K-point, they will also be deducted points based on their distance behind the K-Point on landing. The K-Point is used to measure the size/distance of the hill and can vary in location based on the given hill size. The K-Point is usually where the distance from the takeoff point equals the height of the hill. A “K90”, for example, indicates that on this particular hill, the K-Point, or where the hill begins to flatten out, is 90 meters from the end of the takeoff point.

Failing to meet ski jumping body mass requirements is a violation that results in decreased maximum ski length. If a jumper is below the required BMI of 18.5 without equipment or 20 with equipment, they will be penalized by having to use shorter skis. This penalty is in place to ensure that jumpers do not over diet to decrease their body weight for competition, as lighter athletes tend to perform further jumps. There is also a suit violation that requires the jumper’s suit to be within a two-centimeter tolerance of their body measurements to avoid the increased lift created by air being trapped under the suit. If a jumper fails to abide by these rules, they can face disqualification.

Qualification for Olympic ski jumping is based on the Olympic Quota Allocation List. This list is created by combining the FIS World Cup and Summer Grand Prix standings from the previous two seasons. When no more athletes remain on this list, the Continental Cup Olympic List is used, referencing the standings from the Continental Cup from the previous two years. Qualifying athletes are determined using this list by selecting the top 65 male and the top 40 female athletes. Each country is allowed a maximum of nine athletes, five men and four women.

What is ski jumping?

Ski jumping is a winter sport where athletes compete to reach the furthest distance by skiing down a hill and launching themselves off of a jump. There are also style points associated with scoring. Athletes compete against one another individually and by team.. Style points are given and deducted by a set of five judges. Each jumper gets two attempts at the jump, and the jumper or team with the most points wins the competition.

What are the dimensions of an Olympic ski jumping hill?

What is a suit violation in ski jumping?