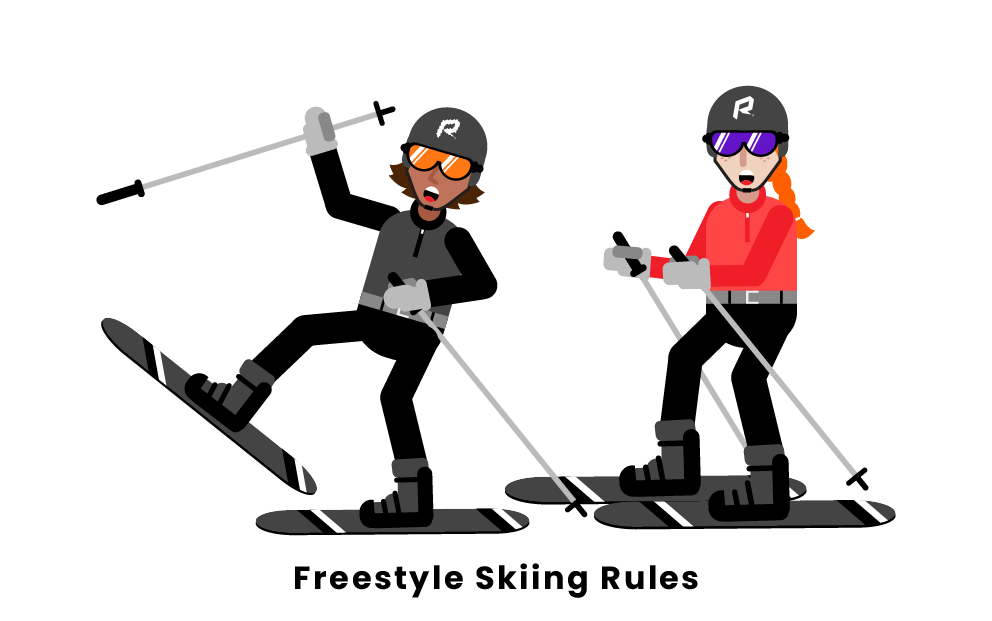 Freestyle skiing is a thrilling and dangerous set of competitions that test a skier’s ability to perform technical jumps and tricks, as well as their ability to sequence several tricks together. Only recently added to the Winter Olympics, freestyle skiing has already become a highlight of the Games.

What are the most important rules of freestyle skiing?

Aerials competitions, which require skiers to perform tricks in the air after taking off from a jump, are judged by a panel of five judges. They assess the skill and execution of competitors’ acrobatic skiing performances based on three criteria: air, form, and landing. Air, which makes up 20 percent of judges’ scores, reflects the technical elements of the jump. These elements consist of approach and take-off angle, height achieved, and the total distance of the jump. Form, making up 50 percent of the score, is a more subjective judgment of the skier’s execution, the precision of movement, and style. Landing, making up the final 30 percent, scores a competitor’s control and location while landing the jump.

In slopestyle events, competitors ski down a prepared course over a series of obstacles such as jumps and rails, on which they perform tricks. Common types of slopestyle tricks are flips, spins, grinds, and grabs. A panel of five or six judges each scores a skier’s run on a scale of 100, based on five criteria: amplitude, difficulty, variety, execution, and progression. Amplitude is the height and distance of jumps made during tricks, as well as the quality of the landing. Progression is a competitor’s ability to string a variety of tricks together in a novel sequence. Although all five criteria must be considered, they do not have a prescribed weight when determining a score.

Moguls are small, man-made humps of snow. A moguls competition requires skiers to navigate down a course filled with moguls as quickly as possible while executing technical turns, jumps off of ramps, and tricks. The winner is determined based on scores given by a panel of seven judges. Five of the judges are turn judges, who score skiers’ rhythm, technical precision, and adherence to the fall line as they execute alternating left and right turns down the course. The turn judges’ scores count for 60 percent of the overall score. The other two judges are air judges, who score the form and difficulty of the aerial maneuvers executed during the run. The air score is 20 percent of the overall score, with the remaining 20 percent determined by a time score. The time score directly reflects competitors’ time over the course, with the fastest getting the highest score.

Ski cross is a discipline of downhill ski racing in which competitors navigate obstacles that are often found in freestyle competitions, such as banked turns and big-air jumps. Thus, it is considered a freestyle event. Ski cross competitions consist of an initial seeding round followed by elimination rounds, culminating in a final race. All ski cross races are run in heats of four competitors each. The top two skiers from each heat advance to the next round during the elimination rounds, and the slowest two are eliminated. The final heat determines first through fourth place. Meanwhile, the third and fourth place finishers in the semifinal will run a small final to determine the fifth through eighth place in the overall competition.

A halfpipe is a u-shaped course with walls extending 22ft in the air. Halfpipe competitors navigate this course gradually, performing a series of flips and tricks by using the walls of the halfpipe as ramps to propel themselves into the air. Halfpipe is scored by a team of five judges who weigh five criteria when assigning each skier a score out of 100. The criteria are amplitude, difficulty, variety, execution, and progression; none of the criteria have an assigned weight when determining the overall score. Olympic halfpipe competitions consist of an initial qualification round that eliminates half of the competitors, followed by a final round of three runs for each skier. Only the best score among the three runs is used when determining the winner in the final round.

Big air is the newest freestyle skiing event in the Olympics, added for the first time at the 2022 Winter Games in Beijing. In a big air competition, skiers plummet down a 60ft ramp to achieve maximum speed before flying off a ramp into the air, where they perform a series of airborne flips and tricks. A team of judges scores competitors’ jumps on a scale of 100 based on the unweighted criteria of difficulty, execution, amplitude, and landing. A qualification round, in which the highest score out of two runs is used, is followed by a semifinal and final round, each of which allows skiers three runs with the two highest-scoring runs factored into their final score.

There are few restrictions on equipment used in freestyle ski competitions, as long as it is similar in materials and design to commercially available models, which means it will meet applicable safety standards. Freestyle events require specialized skis, such as racing skis in ski cross, mogul skis for moguls, and twin-tip skis used in halfpipe and slopestyle. Ski stoppers, devices which fasten below the binding and retain a ski in the case of a binding release, are mandatory at all sanctioned freestyle skiing practice sessions and competitions. Helmets are required in all competitions, and back protectors are recommended. Poles are optional, and many slopestyle skiers have recently stopped using them in competitions.

Physical contact among skiers in ski cross should be avoided and is only allowed if it is unintentional and incidental to the act of racing. Depending on the severity of the act, intentional contact results in a variety of sanctions. Contact that is intentional but has no effect on the competition draws a verbal warning; two warnings in a single competition automatically result in a yellow card. Hard contact that affects the competition or causes an opponent to crash or leave the course is punished with a yellow card, or minor sanction. A major sanction, or red card, is assessed if a skier makes hard contact with a competitor that is dangerous or causes injury. A major sanction automatically results in disqualification, with the skier not being scored or ranked.

When a skier makes a halfpipe run, they ski back and forth from side to side, using the 22-foot walls on each side of the halfpipe as ramps off of which to perform jumps and tricks. The halfpipe slopes gradually downward over its length, and the skier eventually progresses from the top to the bottom of the slope as they make their run. There is no time limit in which competitors must complete their runs, and skiers may pause for a moment if they wish. However, if a skier stops in the halfpipe for ten seconds or more, the run will be considered completed and they will only be scored based on the tricks performed by that point.

To qualify to compete in the Olympics, a freestyle skier must have placed in the top 30 in a FIS World Cup competition in their respective event during the qualifying period, which extends roughly one and a half years prior to the Winter Games. In addition, skiers must have earned a minimum number of FIS points in their event during that period. Aerials, ski cross, and moguls competitors are required to have 80 FIS points; halfpipe, big air, and slopestyle skiers need 50 points to qualify. Each competing nation is allowed to send a maximum of 30 competitors, with a maximum of 16 women and 16 men. A higher number of quota spots is given to nations with more competitors represented on the Olympic Quota Allocation List, which reflects skiers’ performance in recent competitions.

What freestyle skiing events are featured in the Winter Olympics?

There are six freestyle skiing events featured in the Winter Olympics: moguls, aerials, ski cross, halfpipe, slopestyle, and big air. The first time a freestyle skiing event was included in the Olympics was men’s and women’s moguls at the 1992 Winter Games in Albertville, France. Aerials debuted in 1994, with ski cross first seen in 2010. Halfpipe and slopestyle were both added in the 2014 Sochi Winter Olympics. Big air and mixed team aerials are debuting at the 2022 Winter Games in Beijing.

What happens if you fall in freestyle skiing?

If you fall in freestyle skiing, your score will be significantly lowered. Although there is no fixed point deduction in the event of a fall, every event is judged on criteria that evaluate the technical execution and stylistic mastery displayed during a skier’s run. Some events, like aerials, have set amounts of the score determined by style and technique. Others, like big air and halfpipe, ask judges to determine an overall score while considering all elements of style and execution. Regardless of which type of event you compete in, a fall will lower your score across all evaluation criteria.

What happens if you make contact with an opponent in ski cross?