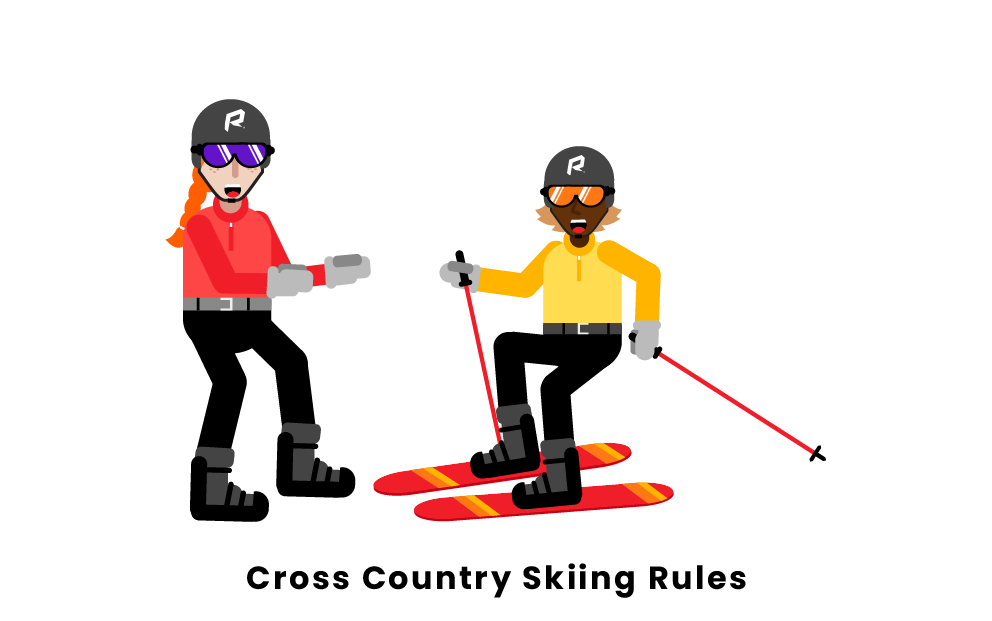 Cross country skiing is one of the oldest forms of snowsports and one of the most physically demanding athletic competitions in the world. The sport is most popular in the Nordic countries in which it originated, but several international competitions exist, notably the Winter Olympics, where it is a fan favorite.

What are the most important rules of cross country skiing?

There are several different competition events in cross country skiing, which are divided between two disciplines: sprint and distance. The competitions among men and ladies are held separately, and the distances for most events are slightly different between the sexes. Sprint competitions take the form of a short prologue in which skiers qualify for a quarterfinal, a short sprint, and a team sprint. All sprint competitions are shorter than 1.8km. Distance competitions feature a moderate distance race (10-15km), a skiathlon, a longer distance race (30-50km), and a four-person relay in which each skier covers 5-7.5km. Ski marathons are long-distance races over 40km long with thousands of participants.

Two main techniques exist in cross country skiing: classic and free. The classic technique, also called diagonal style, requires the skier to keep their skis within two prepared tracks in the snow. Skis in classic technique events are prepared with grip wax, allowing skiers to propel themselves with downward and outward force on their skis. Free technique, also called skating, allows skiers to lift their skis out of the tracks, pushing outward with the edges to propel themselves forward. Cross country skiing events are conducted using one of the two techniques, except for skiathlon, which combines one segment of each technique into a single competition.

Any track hosting a cross country skiing competition must first be homologated (certified that it meets regulatory requirements) by the governing body FIS. The requirements to be homologated include a track between four and nine meters wide. A classic track must have two parallel grooves in the ideal racing line. Courses are required to provide an appropriate level of technical difficulty and must provide the competitors with roughly three equal length parts of uphills with occasional steep climbs, rolling or undulating terrain with uphills and downhills alternating, and downhills with occasional technical descents. Courses vary in length from less than 1.8km to over 10km. A single race may consist of several laps around the same course.

In a cross country skiing competition, an athlete’s skis, poles, boots, and bindings are all subject to regulations. In addition, all competitors must wear any numbers, GPS trackers, or other provided means of identification at all times. Skis must be the same basic shape as commercially available ones, weigh at least 750g per pair, and be no shorter than the skier’s height minus 100mm. Classic competitions set the maximum pole length at 83% of the competitor’s height; it is 100% of their height in free technique races. Boots and bindings must be of the same design as commercially available models. No equipment may contain a spring or other mechanical propulsion device.

Four different types of starting procedures are used in cross country skiing competitions: interval, mass, pursuit, and heat. In an interval start, competitors leave the start line individually, at regular intervals of 15-30 seconds. The winner is then determined by the shortest time over the course. Mass starts allow all competitors to start the race at the same time by arranging skiers in a grid according to their starting position. Pursuit starts allow skiers to leave the start line at intervals determined by the results of a previously completed stage. In heat starts, competitors are divided into groups, with all members of a group leaving the start line at the same time.

Track switching rules apply to classic technique segments and competitions where there are more than one available set of tracks for a skier to place their skis in. During a classic technique race, skiers are expected to choose a set of tracks and stay in them. However, they are allowed to change to a different set of tracks at any time, as long as they are in no way obstructing the progress of an opponent by doing so. Excessive track changes, particularly if they are perceived to give a competitive advantage, can incur a rule violation. These rules do not apply to free technique competitions.

Cross country skiing competitions with a mass start determine a winner based on the order in which skiers cross the finish line; competitions with all other types of starts compare time over the course, with the shortest time being the winner. FIS, the international governing body, awards points to finishers in sanctioned races, with the maximum number of points being given to the winner and decreasing amounts given to finishers in lower positions. Regular season World Cup races award 100 points to the first-place finisher, descending down to one point for 30th. World Cup Finals, mini-tours, Stage World Cup, and Tour de Ski races award 50 points to the winner, descending down to one point for 30th.

Several penalties may be assessed in cross country skiing if a competitor breaks a rule, including disqualification, competition suspension, time penalty, written reprimand, verbal reprimand, or a monetary fine. Disqualifications are issued for major infractions that clearly affect the outcome of the competition. Competition suspensions are given for violations during sprint events. Time penalties are assessed if a racer starts too early or too late. Written and verbal reprimands are issued to inform the competitor of existing or potential violations that do not affect the result of the race. Monetary fines are assessed for commercial and advertising violations and minor course discipline infractions.

In cross country skiing events, disqualifications are used if a skier commits a major infraction that clearly affects the outcome of the competition by giving that skier an advantage or by creating negative consequences for an opponent. If a major infraction is committed that does not affect the competition, officials are instructed to issue a written reprimand instead. Three violations result in an automatic disqualification: participating in a competition under false pretenses; jeopardizing the safety and security of people or property or actually causing injury or damage; and skiing more than one leg of a relay race. Disqualified competitors are noted as such on the results list, and their times are not printed.

To qualify for the Winter Olympics, cross country skiers must be 15 years old by the beginning of the year in which the Games are held and pass a medical screening. In addition, competitors must have earned fewer than a certain number of FIS points during the season, depending on the event in which they wish to compete. An athlete with fewer than 100 Distance FIS points may compete in any event, sprint or distance. Competitors with fewer than 300 Distance FIS may participate in the 10 and 15km races as well as the team relay and team sprint competitions. All skiers with fewer than 300 Sprint FIS points are eligible to compete in the individual and team sprint events.

What is cross country skiing?

What are the dimensions of an Olympic cross country skiing track?

The dimensions of an Olympic cross country skiing track vary depending on the event being held, as the type of competition dictates both the length and width of the course. Sprint competitions are held on courses no longer than 1.8km. Distance competitions are held on courses of differing lengths, as multiple or partial loops around the course may be used to complete the distance. Standard lengths for distance courses are 2.5km, 3.3km, 3.75km, 5km, 7.5km, 8.3km, and 10km, with some courses running even longer.

How does right of way work in cross country skiing?