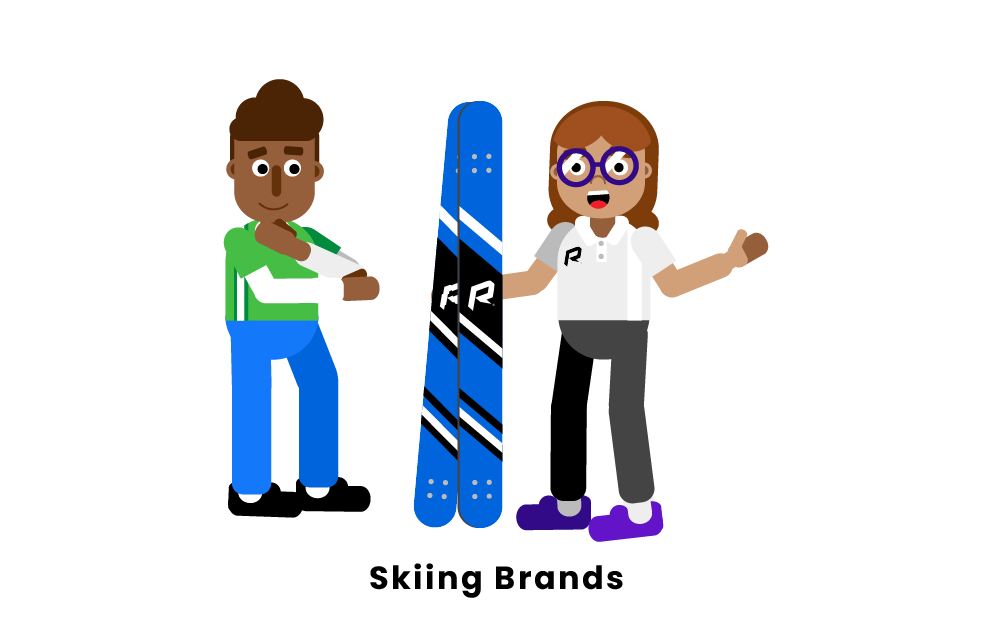 Skiing is a popular snow sport which requires the proper equipment and apparel. This list compiles the top ten brands used by both recreational and professional skiers.

What are the most popular skiing brands?

Created in the early 1960s, K2 has been a forefront of ski brands ever since. Leading the way in the innovation of fiberglass technology with skis that can multitask, K2 is a great all-mountain ski option for just about any skier. K2 offers skis in the categories of alpine, big mountain, and freeride, so customers have a large amount of options when choosing what kind of skis they want from this brand.

While having a main focus on skis, K2 also makes ski boots, jackets, and other apparel that is state of the art. K2 has a large number of professional skiers and Olympians as a part of their team. Some include Sean Petit, Maggie Voisin, Colby Stevenson, and Olympic gold medalist Joss Christenson.

Rossignol is a French ski company that has been around for over 100 years. The company was founded in 1907 by Abel Rossignol, who manufactured wood products for the textile industry. He used those skills to create skis for himself and decided to make a company out of it.

Rossignol offers products for both amateur and expert skiers. These products include boots, skis, bindings, and all winter sports apparel. Whether you are a competitive skier or a first timer, Rossignol will have the equipment to suit your needs on the hill.

Founded in the French Alps in 1947, Salomon is considered by many as the epicenter of the mountain experience. Whether you are a beginner or an experienced skier, a fan of the powder or corduroy, Salomon offers a wide variety of skis, clothing, ski boots, goggles, and equipment for alpine and nordic skiers. The company is also renowned for its high-quality boots, as the Salomon S/PRO was named a top boot for the 2019-2020 ski season.

Since the dawn of the sport of skiing, Volkl has been pushing the ski industry to the next level. First founded in 1923, Volkl has been a top brand since its creation. Engineered with German precision, Volkl creates skis for just about any discipline in skiing. With alpine skis, all-mountain, freeride, and mogul skis, Volkl is an extremely diverse brand with a lot to offer.

Volkl is extremely big on innovation, creating titanal frames for the ski for more damping and stability over the entire ski. They have also created 3D glass for the ski which further improves Volkl’s overall ski performance and stability even in the most critical snow conditions.

Volkl sponsors a wide variety of alpine and freestyle skiers. On the alpine side, Adam Barwood, Alana Ramsay, Adrian Pertl, and Andrea Filser are a few racers who represent the Volkl brand. Alex Beaulieu-Marchand, Alex Ferreira, and Andri Ragettli are a few freeriders who are using Volkl.

Founded in 1955 by Alois Rohmoser, this Austrian company manufactures and sells skis, boots, bindings, helmets, poles, bags, goggles, and other pieces of protective equipment. The Backland Carbon custom boot for ski touring was even voted gear of the year by Ski Magazine for 2020, and that is just a small piece of what the organization has to offer to their customers. Offering piste, all-mountain, freeski, and racing skis, the company is able to generate a large amount of money just from their skis.

Armada is another new and innovative skier-owned company. Founded by professionals Tanner Hall and JP Auclair in 2002, they have worked closely with other world renowned skiers to change the perception of skiing. Up to that point, skiing was considered an upper class old man sport, but Armada skiers were able to push the limits of the sport with their creativity and progressive riding techniques, both of which are integrated in their inventive ski design. The ARV design comes in four different waist widths, in order to accommodate any kind of skier, in any terrain.

Established 1939, Nordica is a quality Italian ski brand perfect for both professionals and beginner skiers. The company makes various different styles such as cruising skis, racing skis, and backcountry skis for those who want to rip up the Alps or Rockies. The company especially prides themselves in combining affordability and quality, making them extremely popular for skiers of all levels and ages.

Line started out only as a park ski when created in Albany during the 1995 winter. The company was founded with a mission to grow and rejuvenate skiing by building innovative and athlete driven skis. They were able to accomplish that feat with flying colors being a pioneer in the new age of skiing. They have also expanded into the freeride big mountain area, and have become a top ski for avid freeskiers. They offer arguably the most popular powder skis in the industry with their diverse “Sick Day” series that are light, poppy and stable.

Hadley Hammer, Will Wesson, and legend Tom Wallisch are all skiers who represent the brand. Line also created a video series called “Line Traveling Circus”, which is extremely popular among youth skiers. The series made the brand even more popular, as it led all young skiers to be just like the ones in the videos, buying Line skis themselves.

Fischer is another race oriented company, but has expanded into further ski disciplines making them a top brand. Offering alpine, freeride, tour, racing, nordic, mogul, and all-mountain skis, this is a company with an extremely diverse offering. The company also distributes state-of-the-art boots, poles, and bindings.

While their specialty is in alpine, Fischer has been able to build quite a name for themselves in the all-mountain and freeskiing disciplines as well. Trace Cooke and Lynsey Dyer are a couple freeskiers who currently use this brand as their go to option in skiing. The alpine side has numerous World Cup skiers and Olympians who have collected a large amount of medals. Some of these racers include Bryce Bennet, Eddy Bouvet, and Johannes Thingnes Boe.

Founded in 1945 by Anton “Toni” Arnsteiner, Blizzard has made excellent skis and related gear for nearly a century. Throughout the 1950s and 60s, this Austrian company became world-renowned for their constant innovations in ski technology, adding new models using mixes of polyethylene and fiberglass. Now combined with the company Tecnica, Blizzard remains committed to making some of the best and fastest skis on the alpine and free ride circuits. The company is also known for carrying Tecnica boots, one of the highest quality brands of ski boots on the market. Blizzard’s products, as a result, can be seen at almost every World Championship and Olympic competition.

4FRNT is a newer brand on the skiing scene, being founded in 2002 by skier Matt Sterbenz. The company is geared towards providing the best experience for skiers and riders, and pride themselves on being “By Skiers, For Skiers.” They work directly with athletes on their team when developing products. One of 4FRNT’s most popular athletes, professional freeskier Eric Hjorleifson, is one of the main contributors to the graphics and design of 4FRNT’s skis.

4FRNT makes skis for several skiing disciplines, including powder, touring, and freeskiing. They also produce all-mountain skis, which allow riders to take on anything the mountain throws at them.

Elan was founded in 1945 by Rudi Finžgar and has made its way to becoming one of the best ski brands in the world. Right from the beginning, the company has been focused on looking far into the future, and has been at the forefront of ski innovation. In 1963, Elan became the first company to implement screen-printed graphics into their skis. This practice is used by every major ski company today, and it is rare to find a pair of skis that aren’t decorated with graphics. Ever since the 1970’s, top ski racers all around the world have trusted Elan to make their gear. Elan is now focused on making high-quality all-mountain skis that can perform anywhere on the mountain.

Back in the 1940’s, heavy wood skis were the norm and what everybody used. Howard Head brought his experience in building aircraft fuselages to the industry, using lighter metals and plastics to make skis. This made turning much easier, and Head became one of the top ski companies in the industry. Head is committed to bringing the most innovative skis to the table and creating the best experience for winter sports enthusiasts around the world. Head offers race skis, on piste skis, all mountain, freeski, and freestyle skis. Along with skis, Head also makes and sells bags, helmets, goggles, bindings, and boots.

What are some of the best ski brands?

Two of the best brands for ski equipment and gear are K2 and Rossignol. For over six decades, K2 has made top-quality, state-of-the-art equipment for all-mountain, Alpine, big mountain, and freeride skiing. Since its founding in 1907, Rossignol also has a long and rich history of making winter sports gear and apparel perfect for both expert and amateur skiers.

What is the oldest skiing company?

By far, the oldest skiing company still making skis is Rossignol. The French company was founded by textile manufacturer Abel Rossignol in 1907. For over 115 years, Rossignol has made ski equipment and gear perfect for the most amateur as well as the most expert skiers. For this reason, you will likely see their products on the bunny slopes as well as on premier alpine skiers, such as Alice Merryweather, Arthur Bauchet, and Petra Vlhova.