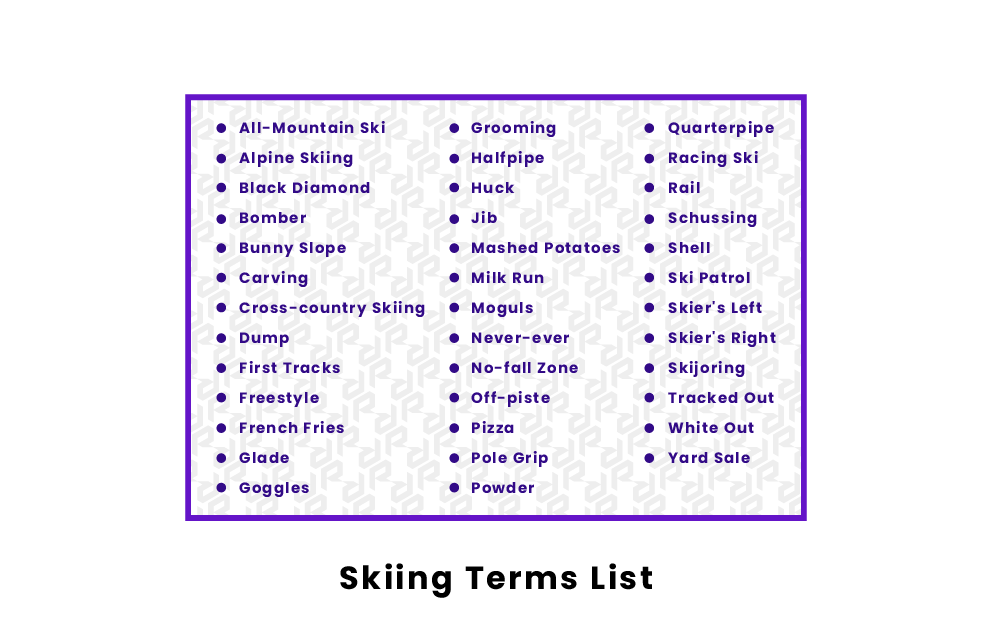 The sport of skiing is a very intricate one, with many different types of skiing methods and equipment. This piece will help familiarize you with some of the key glossary terms to help shape a better understanding of the sport and how it operates.

Alpine Skiing: Alpine Skiing refers to the skier going downhill with fixed heel bindings. This is a very common type of skiing.

Black Diamond:  Black diamonds and double black diamonds are the most difficult leveled ski slopes, usually filled with obstacles and natural hazards throughout the trail, making it difficult to navigate.  It is not advised for skiers unless they feel that they are at a very advanced level.

Bomber: People skiing recklessly down the mountain with a lack of control will often be called bombers by more experienced skiers on the mountain.

Bunny Slope: A very easy area or trail for people who are new to skiing and need an area to practice with no difficulty involved. They are usually located at a low altitude on the mountain so beginners can go up and down the slope more quickly.

Carving: A quick and rapid turn using one skis’s side that allows for a very swift change of direction and speed. A technique used by much more experienced and skilled skiers.

Cross-country Skiing: A different kind of skiing where the terrain is mostly flat and the skiers will travel in a straight line with not much resistance or momentum. It is potentially used by people who are trying to get more exercise in when they ski.

Dump: This refers to an area on a mountain in which there has just been a brand new layer of snow that has a powdery makeup to it. It can usually form after a brand new snowfall on the mountain trails.

First Tracks: When a skier creates a brand new path with their skis on fresh snow, it becomes visible to all of the other people on the mountain. Therefore, the skier can essentially create a new lane on the trail for other skiers to follow.

Freestyle: Applies to any skier on the mountain or trail who is trying to focus on tricks and skill moves with their skis. These types of skiers will be very experienced, and have had the basics of the sport down for a while.

French Fries: The position in which your skis are right next to each other facing the same direction, which helps for speed and control. Often a technique that is taught to brand new skiers.

Glade: An area on the mountain or trail where there are many trees together in one area, creating a potential hazard. Usually it is advised to stay away from these areas. They are usually located on the higher difficulty areas on the mountain.

Goggles: Goggles  or sunglasses should almost always be worn by skiers on the mountain, to help protect against many hazards that can come flying while on the mountain trails. Snow, sleet, and other natural hazards can come at a skier, and are especially dangerous when travelling at a high speed.

Grooming: Mountain employees and officials will usually do grooming to help patch over certain mountain trails that could use a new layer of snow. If it is reported that certain areas on the mountain trail seem dangerous, they will be groomed over by the staff.

Halfpipe: A tunnel shaped pathway that is used by many skiers to complete high level tricks and acrobatics on the mountain. They are mostly used by high level skiers.

Huck: A term used by high level skiers to describe being able to perform a jump or aerial trick off of an elevated platform on the mountain.

Jib: This term describes the act of riding your skis in an area that does not currently have any snow on the ground.

Mashed Potatoes: This term refers to snow on a mountain or trail that is very wet and not packed in tightly. These areas are not the best in terms of ski performance and execution.

Milk Run: Usually the first ski run of the day, many skiers will usually be a little bit rusty or off the top of their game. It can often put mistakes behind many skiers and help them warm up.

Never-ever: A nickname given to someone on a mountain or trail who very clearly has never skied before or looks like they have very little experience.

No-fall Zone: A specific location on the mountain or trail where it is very clear that any potential fall could lead to very serious injury or destruction of equipment. It will normally be located on some of the higher level trails on the mountain.

Off-piste: When a skier on the mountain goes off the mountain trails into unmarked areas that are not a part of any main trails. Sometimes this will be referred to as going out-of-bounds.

Pizza: The position in which your skis are angled together in the same direction to help with managing your speed and direction as you go down the mountain trail. This is another technique that is usually used by beginning skiers.

Powder: Universally known as the best type of snow for skiers to navigate on, it is considered to help with skier performance due to its makeup. Many skiers will have a faster speed when using this kind of snow.

Quarterpipe: Another type of pipe used by skiers for highly difficult skills and aerial tricks on the mountain. Only used by high level skiers and trained professionals.

Racing Ski: Skis built for maximum speed and performance, usually a bit bigger than normal skis and a bit more thin. These kinds of skis will be exclusively used for high level skiers and trained professionals.

Rail: A cosmetic item that can be found on certain mountains , rails are trails that skiers can use for tricks and to help guide them down the mountain.

Schussing: The act of skiing straight down the mountain trail without having to make a single turn or other maneuver as you fly down. This would most likely take place on a more difficult mountain trail that does not have as many skiers on it.

Shell: The exterior area of a ski boot, usually a hardened area that can protect from hazards and snow on the trail.

Ski Patrol: Trained mountain professionals who will patrol mountain trails to ensure that safety procedures are being followed and that there are no issues on the mountain. They can also assist with accidents and lost equipment and gear.

Skier's Left: The Skier’s left is the area to the left of a skier who is currently skiing down a trail on the mountain.

Skier's Right: The Skier’s right is the area to the right of a skier who is currently skiing down a trail on the mountain.

Skijoring: A very different way of trying to ski, Skijoring involves a pack of dogs or any other animal who will pull the skier across the ground, usually on a flatter surface. It is often depicted in movies and film, where you see the animals attached to a certain set of skis flying across a surface.

Tracked Out: This term can be used to describe a specific trail on the mountain that has been used so much that the snow is in bad shape. After being raced over for a long period of time, the specific trail starts to deteriorate and become unusable to skiiers.

White Out: Certain areas of the mountain trail where weather or exterior factors limit the visibility of what the skier can see to essentially zero. These are very dangerous conditions, and more likely to happen to a skier at a higher altitude on the mountain trail.

Yard Sale: A term used to describe when someone riding down a mountain trail gets into an accident that potentially sends many of the skiers gear around the area. Often happens to brand new skiers who have not yet fully mastered the control of their skis.