How Does Scoring Work in Ski Jumping? 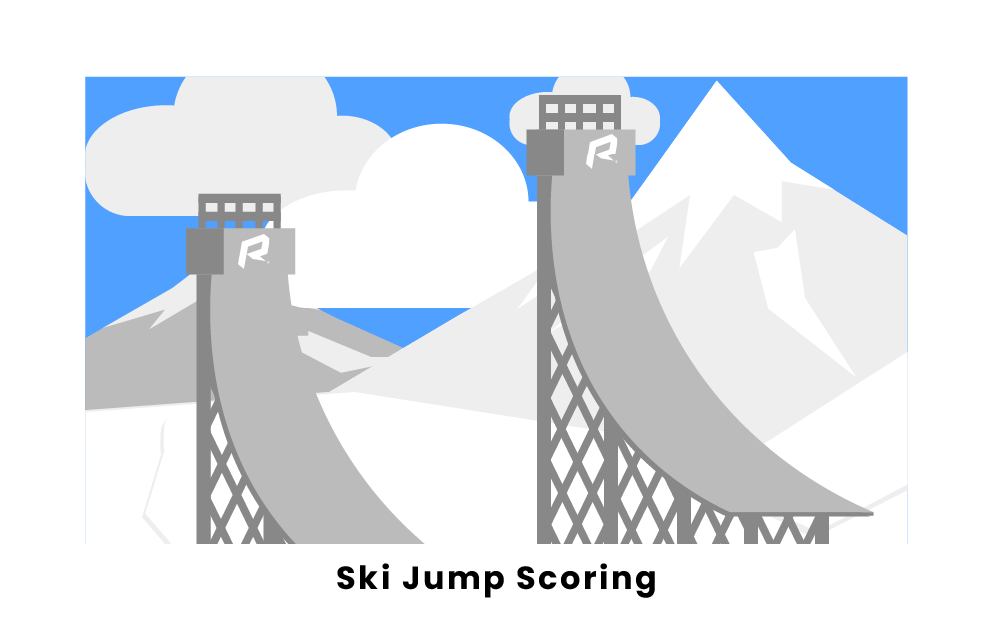 Ski jumping is a popular sport at the Winter Olympics, which involves athletes on skis descending steep slopes with a built-in jump point to perform long flights through the air before landing on their skis. Since the sport of ski jumping requires the combination of numerous technical skills, scoring for the sport is based on a points system. Judges evaluate an athlete’s performance in two critical areas of their jump: distance and style. At the end of the competition, the athlete with the highest number of points wins.

Distance points are points that a ski jumper earns based upon the distance they travel from the takeoff to their landing point. The scoring system for distance points is a bit more complex than the system for style and landing points due to the unique types of hills that ski jumping occurs on. Hills used for ski jumping are always measured to determine distance; however, they are not measured based upon their actual size but rather using a special mark called the K-point. In ski jumping, a K-point refers to the place on the hill where the landing area begins to flatten out. This is considered the ideal landing point for ski jumpers or the distance an average jumper would be expected to reach on that particular hill. For a normal-sized ski jumping hill, the K-point is usually measured at 90 meters, while for a large hill, the K-point is 120 meters.

Since the K-point is the ideal landing area for a ski jumper, it has an automatic point value associated with it. If a jumper lands exactly on the K-point, they automatically receive 60 points. On a large hill, landing beyond the K-point will earn the jumper an additional 1.8 points for every meter they traveled past the K-point, while on a normal hill, an extra two points-per-meter will be added for going beyond the K-point. It is important to earn as many points as possible in ski jumping, as the athlete with the highest number of overall points wins the competition. Therefore, athletes aim to jump as far as they can.

Style points are the second category of points a ski jumper earns when performing their sport. These points are given out by five judges based upon their evaluations of how skillful the jumper’s performance was while in the air. Each judge awards the jumper points on a scale from 0 to 20, after which the highest and lowest scores are eliminated. Therefore, athletes can score a maximum of 60 style points for a jump.

When evaluating the style of a skier’s jump, the judges consider a variety of factors. Typically, they will be looking for signs that the skier is in control of their jump and is performing with effective techniques. For example, they will look to see whether the skier’s flight was smooth or wobbly and whether they were able to keep their skis straight in mid-air and not flare them outwards. They will also evaluate the power of the jump, as well as its boldness, to ascertain the skier’s confidence. Finally, they will evaluate the quality of the skier’s landing and their outrun, a term that refers to the gradual slowing and stopping of their forward progress after landing. Judges will look to make sure that the jumper lands stably in the telemark position, a skiing posture where the athlete’s knees are bent with their body leaning forward, with one ski held out in front of the other. Finally, they will evaluate the outrun to ensure that the skier maintains a straight path to the green finish line, marking the jump’s end.

In addition to the key points based on an athlete’s distance and style, ski jumping scorers also award or subtract points based upon external factors such as wind speed and direction, or for changes in the height of the starting gate. For wind speeds, points can be automatically deducted from an athlete’s score if they were jumping with a favorable wind, in order to level the playing field for other jumpers who may not have had that advantage earlier or later in the competition, and jumpers with unfavorable winds can also have points added to their scores.

Additionally, points can be added to or subtracted from a jumper’s score based upon the position of the starting gate, which can change before a skier makes their jump. Competition officials can make the decision to move the starting gate higher or lower on the hill to ensure optimal takeoff speed, but they will always add or subtract points accordingly. If the gate is moved higher on the hill, points will be subtracted from the jumper’s score, as a higher gate allows the jumper to gain more speed on the downhill run, making it more likely that they will fly farther. If the gate is lowered, points will be added to the jumper’s score, as a shorter downhill run is often trickier to navigate.

What is the scoring system in ski jumping?

In ski jumping, the scoring system is a points-based evaluation of the quality of a skier’s jump. Points are awarded in two major categories: distance and style. Distance points are based upon the K-point of the hill, with jumpers earning 60 points for reaching the K-point and additional points for every meter they travel past the K-point. Style points are awarded based upon the quality of the jumper’s flight, landing, and outrun, with a maximum of 60 available to each jumper. Finally, points may be added or subtracted based upon wind speeds and direction, or based upon the height of the starting gate.

How does ski jumping scoring work in the Olympics?

In Olympic ski jumping, scoring is the same as in most other ski jumping competitions. Distance points are awarded based upon the number of meters traveled past the K-point of the hill, and style points are awarded by five separate judges on a scale of 0 to 20, with the highest and lowest scores being eliminated. Originally, compensation points for wind speeds and gate height were not included in the Olympics, but these were introduced during the 2014 Sochi Winter Games.

What elements are ski jumpers judged on?

Ski jumpers are judged on various elements of their jump, most notably their distance traveled. The greater their distance, the more points they receive. Athletes are also judged based on the style of their jump, with judges evaluating aspects of the jump such as flight stability, power, landing position, and the straightness of their outrun. Each of these factors contributes to the number of style points an athlete receives. Finally, athletes may earn more points or have points taken away to compensate for external factors such as prevailing winds, which can lend an unfair advantage to their jumps.

Pages Related to How Does Scoring Work in Ski Jumping?