How Does Scoring Work in Freestyle Skiing? 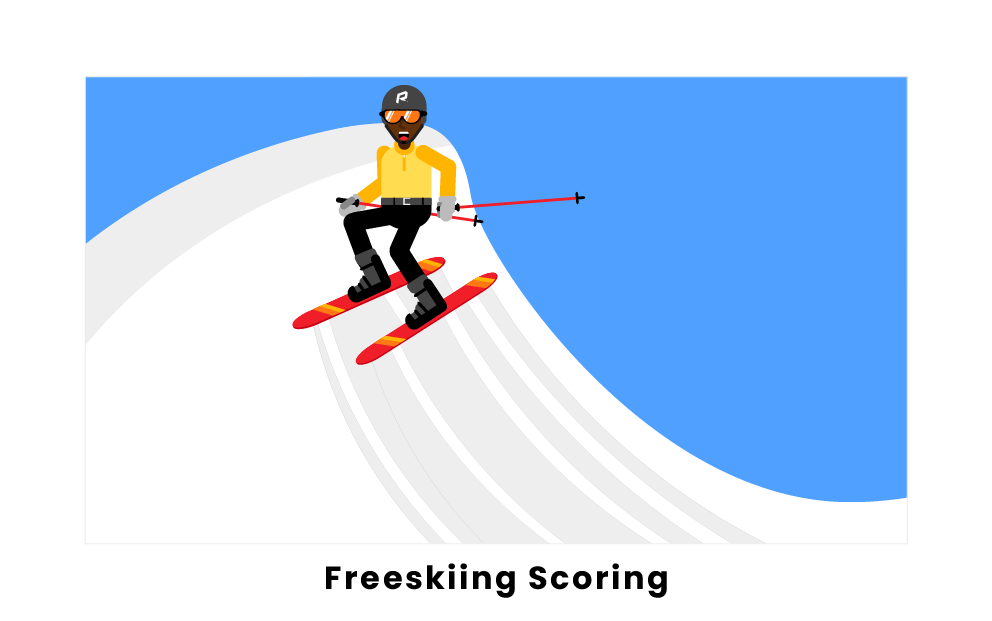 Freestyle skiing competitions feature six different events: aerials, big air, slopestyle, halfpipe, moguls, and ski cross. Most events are scored by judges who assess a skier’s style and technique. The exceptions are ski cross, which is a race, and moguls, which incorporates time over the course as a weighted element of the judged score.

Aerials scoring is determined according to a formula that weighs air, form, landing, and the difficulty of the tricks. A panel of five judges each awards a maximum of 2.0 air points, 5.0 form points, and 3.0 landing points based on their assessment of a run. The highest and lowest of the five scores in each points category are discarded, and the remaining three scores are then added together. The total of air, form, and landing points (a maximum of 30 per run) is then multiplied by a degree of difficulty factor up to 5.0. This factor is determined by the rating given to each trick on the FIS’s difficulty list. Thus, the maximum score for a run is 150 points. Aerials skiers make two runs in a competition, and the scores are added for a cumulative maximum of 300 points.

In big air competitions, skiers make three runs down the ramp, with only the two highest-scoring runs counting toward their final score. For each run, a team of judges assigns a score out of 100 based on the criteria of difficulty, execution, amplitude, and landing. There is no formula for assessing these criteria; judges must consider them all when determining a score. The highest and lowest scores are discarded, and the remaining scores are averaged together, making the maximum score for an individual run 100 points. The scores of each competitor’s two best runs are added together, giving each skier a total score out of a maximum of 200 points.

Halfpipe and slopestyle are scored in the same manner, based on identical criteria. Both events are scored by a team of five or six judges who each assign a score out of 100 points, based on a skier’s amplitude, difficulty, variety, execution, and progression over a run. There is no formula for the judges to follow; they must simply consider all five criteria. The judges’ scores are then averaged together to determine the skier’s score for the run. The qualification round gives each skier two runs, with only the better score counting. Competitors make three runs in the final round, with only the highest-scoring run counted.

Moguls events are scored by a panel of seven judges. Five judges are responsible for scoring turns, and two judges score air. Each turn judge scores the run out of 20 points; the highest and lowest turn scores are discarded, and the remaining three are added for a maximum turn score of 60 points. The two air judges also assign a score out of 20 points, with each of the two jumps counting for 10. The air scores are averaged together for a maximum air score of 20. The speed score reflects time to complete the run, with the fastest time getting the most points out of a maximum of 20. The turn, air, and speed scores are added to determine a total score for the run out of a maximum of 100. After a qualifying round, the competition features three elimination rounds culminating in a final. Scores do not carry over from round to round.

Ski cross is a downhill ski race run in a heat format with four racers on the course at a time. After an initial seeding round, elimination rounds begin with a round of 32 and culminate in a final heat of four. The top two skiers in each heat during the first elimination round advance; the bottom two are scored 17th through 32nd, based on their finish and seeding position. The top two finishers in each semifinal advance to the final, which determines first through fourth place. The bottom two finishers in each semifinal race in a small final to determine fifth through eighth places.

What is the scoring system in freestyle skiing?

The scoring system in freestyle skiing is a scale of one to 100, with each competitor’s score determined by a panel of judges. Skiers are given two or more opportunities to make their best run, with only the best one or two scores counting toward their final result. Judges evaluate the technical execution of jumps and tricks–including height, distance, and location–as well as style and form. Ski cross is the exception, as it is an elimination-style race competition staged over several heats.

How does freestyle skiing scoring work in the Olympics?

Freestyle skiing scoring in the Olympics works by a panel of judges assigning competitors scores out of 100. These scores are based on the judges’ assessments of technical and stylistic elements displayed by a skier during a run. Some events, like moguls and aerials, require judges to use a formula that weighs particular criteria in a specific ratio when determining a score. In other events, like halfpipe, big air, and slopestyle, judges assign scores based on several unweighted criteria.

What are the three factors used to judge the runs in freestyle skiing?

Pages Related to How Does Scoring Work in Freestyle Skiing?