How Does Scoring Work in Cross Country Skiing? 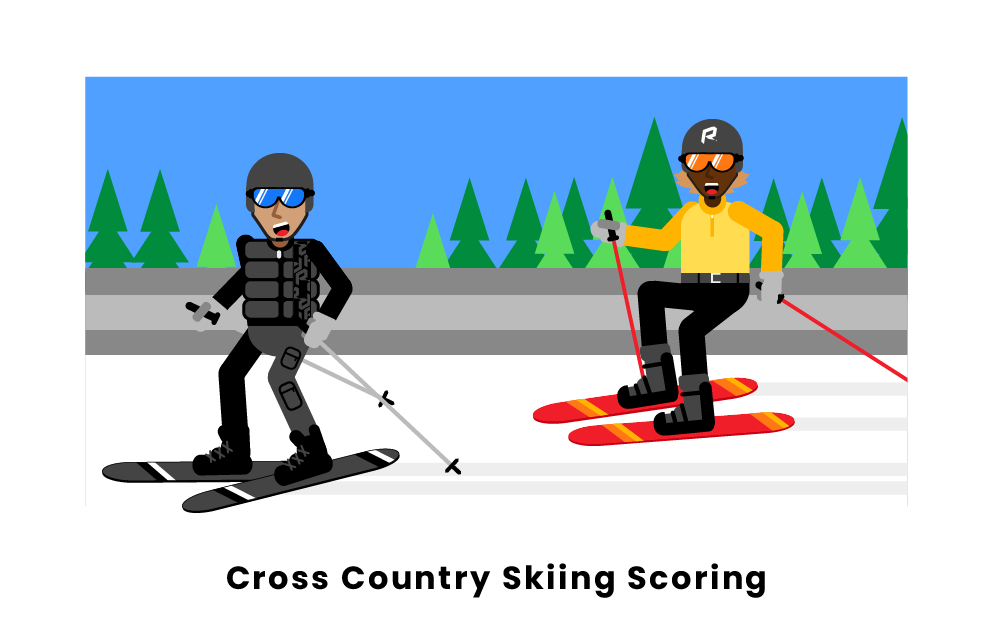 Two types of scores are displayed in the results of every cross country skiing competition: each skier’s rank, as well as the number of FIS Points awarded to them. Rank is simply a numerical reflection of which place a competitor finished in. The winner’s rank is 1; the fourth-fastest skier’s rank is 4, etc. FIS Points reflect a skier’s competitiveness in a race. The winner receives zero FIS Points, and every other finisher receives a number of points based on their time interval behind the winner, with the last-place finisher getting the highest number of points. Like strokes for golfers, a cross country skier wants to get the lowest number of FIS Points possible. Thus, the most competitive and elite skiers are the ones who accumulate the lowest number of points over a season.

There are several methods for starting a cross country ski race, including mass, interval, pursuit, and heat starts. In mass start events, all skiers start at the same time, with the winner and final results based on the order in which competitors cross the finish line. The racers start in an arrow-shaped grid formation. Competitors’ positions in the grid are determined by their finishes in a prior qualifying race or by their rankings on a list maintained by the governing body, with stronger skiers starting at the front of the grid. All other start types, including interval, pursuit, or heat starts, release skiers individually or in groups, with the final individual or team rank determined based on time over the course. Regardless of start type, the FIS Points awarded in any particular competition are always based on skiers’ time intervals behind the winner.

The types of cross country skiing penalties that can affect a competitor’s score are time penalties, competition suspensions, and disqualifications. A time penalty, which typically adds 15 or 30 seconds, is assessed if a skier starts too early. Competition suspensions are used for violations during sprint competitions or stages and result in the competitor being scored last. Disqualifications are used for serious infractions, and they result in no score or time being posted for the offending skier.

FIS Points are calculated by dividing a competitor's finish time by the winner’s time, subtracting one, then multiplying by a factor between 800-2800, with a lower factor reflecting a more difficult race format. Interval and pursuit races have lower factors, and mass start races have higher factors, as the pack racing of mass start races makes it easier to stay close to the leader. The resulting number of FIS Points awarded represents both the size of the interval back from the winner, as well as the difficulty of the format of the race. Thus, lower FIS Points reflect both a time closer to the winner’s and a more challenging race format.

The final step for calculating the FIS Points in most competitions is adding a race penalty, which corresponds to the rankings of the top competitors in the field. There is no race penalty for the Winter Olympic Games, the FIS Cross Country World Cup, or the FIS World Championships, as those events represent the highest levels of competition. For all others, the current accumulated FIS Points of the three highest-ranked competitors are added together, then divided by 3.75 to determine the race penalty. The race penalty is added to each competitor's FIS Points for the competition, giving them a final FIS Point score for the race. A higher race penalty reflects and punishes a weaker field.

What is the scoring system in cross country skiing?

The scoring system in cross country skiing assigns each skier a rank and awards a number of FIS Points after every competition. Rank is a numerical representation of a skier’s finishing position, with the winner ranked 1. FIS Points are awarded based on a formula that weighs: interval behind the winner’s finish time, difficulty of the race format, and competitiveness of the field. FIS Points accumulate over a season, and cross country skiers are ranked by their FIS Points, with the skiers having the lowest number of points ranked the highest.

How does cross country skiing scoring work in the Olympics?

Cross country skiing scoring in the Olympics works the same way it does in the FIS World Cup and other professional competitions. Skiers are ranked according to either their elapsed time across the course or their position crossing the finish line, depending on the starting procedure of the event. FIS Points are awarded in the Winter Games in the same manner as any other cross country skiing competition. Thus, a poor showing in the Olympics can negatively affect a skier’s FIS ranking.

How many athletes participate in cross country skiing at the Olympics?

Typically, around 300 athletes participate in cross country skiing at the Olympics. There were 310 competitors at the 2014 Winter Games, and 313 in 2018. At the 2022 Beijing Olympics, 296 cross country skiers are scheduled to compete. The overall number of competitors, as well as the number of men and women skiers that each National Olympic Committee may send to the Olympics is dictated by the IOC. For 2022, the maximum each country may send is 16 skiers, with no more than eight men or eight women.

Pages Related to How Does Scoring Work in Cross Country Skiing?