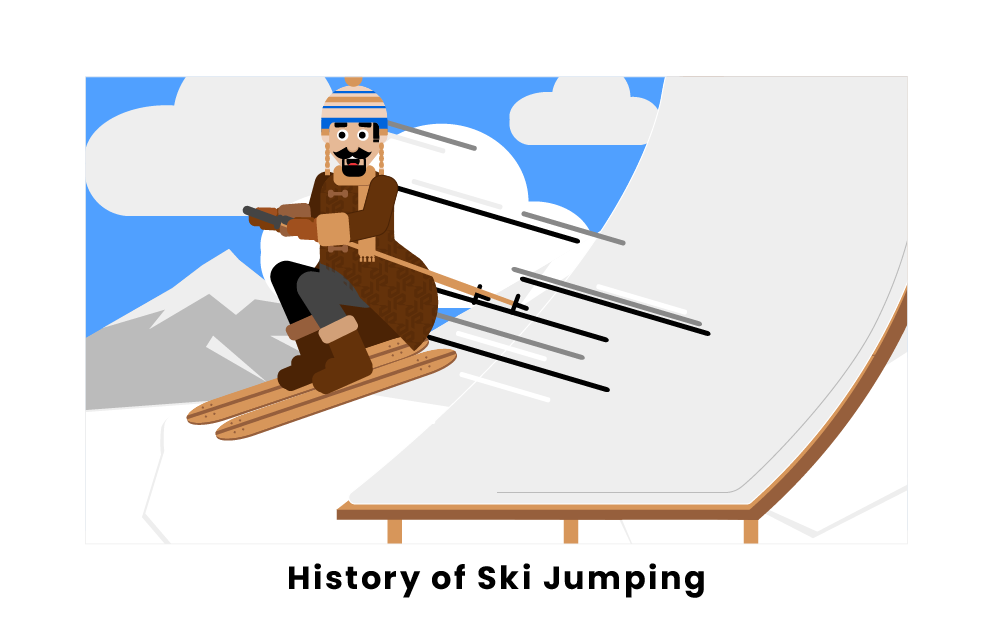 Ski jumping is one of the many winter sports that are potentially dangerous and, in turn, very exciting. It involves an athlete skiing down a steep hill then launching themselves off an incline, trying to gain as much distance as possible before landing. Ski jumping requires skill, execution, and a whole lot of bravery.

Ski jumping is a popular sport featured in the Winter Olympics today, however it wasn’t always a prominent winter sport. Read on to learn about the history of ski jumping and how it evolved from an activity for daredevils into a well-known sport featured on a global level.

Ski jumping can be traced back to 1808 when Ole Rye first jumped 9.5 meters in Norway. However, modern ski jumping is accredited to another Norwegian named Sondre Norheim, who is widely considered to be the father of modern ski jumping. He won what has been described as the first-ever ski jumping competition that included prizes, held in 1866 in Høydalsmo, Ofte, Norway. As a result of the sport’s increasing popularity in Norway, Norwegian Immigrants brought the sport to the U.S. in the late 1800s.

Thulin Thams and Sigmund Ruud developed the Kongsberger Technique after World War I. This new jumping style incorporated jumping with the upper body bent at the hips, leaning forward very widely, and with your arms extended at the front with your skis parallel to each other. This technique helped Austrian ski jumper Sepp Bradl become the first athlete to jump over 100 meters in 1939.

The sport was added to the Olympics in 1924 at the inaugural Winter Olympic Games in Chamonix, France. At the time, Olympic ski jumping only featured a single men’s individual large hill event. In these first Winter Olympics, Norway swept the podium in ski jumping by claiming the event’s gold, silver, and bronze medals. However, 50 years later, it was discovered that there was a computational error, and Anders Haugen of the U.S. was awarded the bronze medal at a special ceremony in Oslo at 86 years of age.

At the 1964 Games in Innsbruck, a much bigger hill was added, and the ski jumping event was split into large hill jumping and normal hill jumping. The competitions are held on carefully prepared hills, with the distance of a large hill standing at 120 meters and a normal hill measuring 90 meters high. There are currently both individual and team ski jumping events at the Olympics, although this wasn’t always the case. The men’s team large hill event was added in 1988, and a mixed team normal hill event will debut in 2022. Women’s normal hill ski jumping was not added to the Olympics until the 2014 games in Sochi, Russia. This was largely due to the fact that there were very few female athletes in the sport.

What is the history of ski jumping?

The first-ever recorded instance of ski jumping took place in 1808 when an officer in the Norwegian Army named Olaf Rye launched himself on skis and covered a distance of 9.5 meters. He did this to showcase his skill and courage to his fellow soldiers.

Where did ski jumping start?

Ski jumping, like many other skiing disciplines, was born in Norway. The very first ski jumper was a Norwegian soldier named Ole Rye, who jumped on skis for the first time in recorded history. The first-ever ski jumping competitions were also held in Norway. The first was in 1866 in Høydalsmo, Ofte, Norway. The Norwegian Royal Family became heavily invested in the sport and gave the winner of a competition held in Oslo in 1892, the “Kings Cup.” In the late 1800s, Norwegian immigrants brought the sport to the United States and other parts of the world.