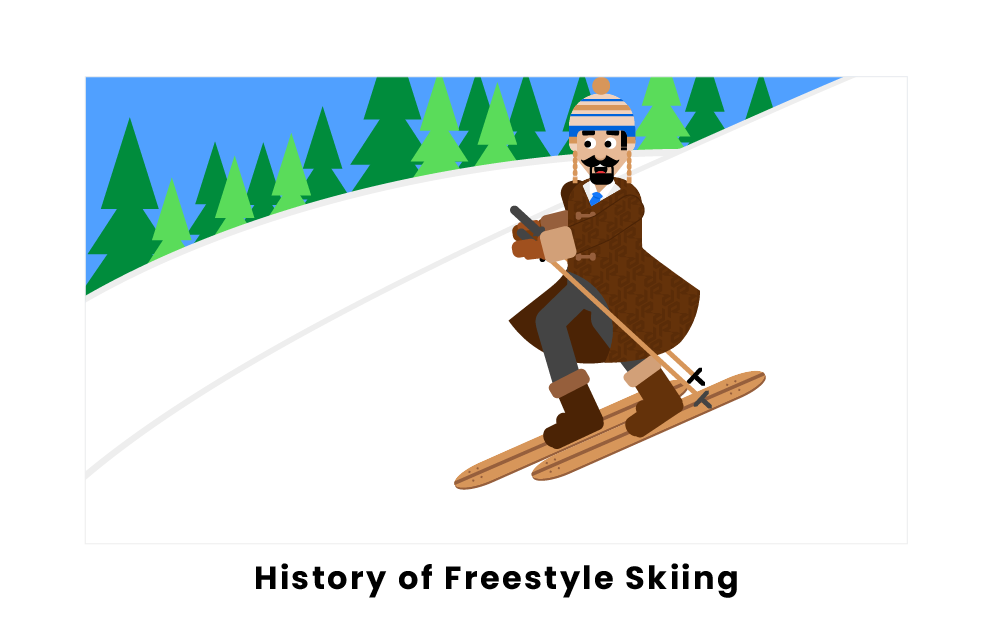 Freestyle skiing is an evolution of downhill and alpine skiing and brings an additional element of excitement and skill to skiing sports. Merging the two aspects of speed and showmanship that are inherent in other forms of skiing, freestyle skiing involves performing complex aerial maneuvers while on skis. Freestyle skiing is a relatively modern sport, and its historical origins date back to the early 1900s.

Freestyle skiing is one of the newer disciplines of skiing, but it features a rich history over the course of its 100+ year history. Read on to learn about the history of freestyle skiing and how it has evolved into the sport we know today.

Freestyle skiing is a more modern discipline in the realm of skiing sports, others of which have a long history dating back hundreds of years. Freestyle skiing developed out of these earlier sports, such as downhill and alpine skiing, and thus, it is natural that many of the first practitioners of freestyle skiing hailed from the countries where these earlier forms of skiing were popularized. Evidence of skiers performing aerial maneuvers can be traced back to the early 1900s, where athletes in countries like Norway, Austria, and Italy (where alpine skiing originated) were recorded performing somersaults and other tricks on skis. By the 1920s, skiers in the United States had picked up the habit of doing flips, spins, and other tricks, much like their European counterparts. Throughout the 1930s, freestyle slowly began to develop into its own skiing sport, paving the way for future competitions.

The practice of freestyle skiing began to gain prominence in the 1950s and 1960s. In 1952, after winning two Olympic medals in alpine skiing, Norwegian skier Stein Eriksen put on some of the first-ever acrobatic skiing shows, charging $1,000 to those who wished to attend and watch his aerial acrobatics. Freestyle skiing took off in the United States in the 1960s, in tandem with social movements emphasizing freedom of expression and liberation from established authority. The practice of freestyle skiing gained an affectionate nickname in America, with practitioners referring to it as "hotdogging."

Over the course of the 1960s and 1970s, "hotdogging" grew in popularity, with the first freestyle skiing competition being held in 1971. However, it was impeded from becoming a true professional sport due to a number of athlete injuries. The sudden rise of freestyle skiing caught the attention of skiing organizations across the globe, and, in 1979, the discipline was officially recognized by the Fédération Internationale de Ski (FIS), also known as the International Ski Federation. The FIS attempted to regulate the new sport of freestyle skiing in order to reduce some of its more dangerous elements, and in 1980, the first-ever FIS World Cup was held.

Nine years after first being recognized as an official skiing sport, freestyle skiing was included in the Olympic Games for the first time, appearing as a demonstration sport in the 1988 Winter Games in Calgary. Three freestyle events were held: moguls, aerials, and ballet, with each event having programs for both men and women. These three events slowly integrated themselves into official Olympic status in the years that followed. Moguls entered the games as a sport during the 1992 Albertville Games, while aerials followed at the 1994 Lillehammer Games two years later. Other freestyle disciplines have since been added to the Olympics: ski cross at the 2010 Vancouver Games and slopestyle and halfpipe at the 2014 Sochi Games.

What is the history of freestyle skiing?

Freestyle skiing is a form of skiing that involves aerial flips, spins, and somersaults, among other maneuvers. Developing from the earlier sports of downhill and alpine skiing, freestyle skiing first emerged in the early-to-mid-1900s, originating in Europe in the early 20th Century, spreading to America in the 1920s, and growing in popularity through the 1950s, before finally taking off in the 1960s and 1970s. It was officially recognized as a skiing sport in 1979 and appeared as a demonstration sport in the 1988 Olympics before it became a full Olympic sport in 1992.

Norwegian skier Stein Eriksen is widely considered to be the "godfather" of freestyle skiing. A gold and silver medallist at the 1952 Winter Olympics, Eriksen became a celebrity ski instructor in the United States after his Olympic fame and began performing acrobatics shows on skis for fees of $1,000. Eriksen's popularity is considered to be one of the main causes behind the rapid rise in the popularity of freestyle skiing during the 1960s, which also coincided with social movements aimed at freedom of expression, which tied in naturally with the sport.

Where did freestyle skiing start?

Freestyle skiing began in Europe but was largely popularized in America. The origins of the sport can be traced to European countries such as Norway and Italy, where alpine skiing also originated. The sport was also popular in Canada, but it was not until the 1960s when freestyle skiing (known as 'hotdogging" in America) truly began to surge in popularity. This wave of interest in the sport prompted the FIS to make freestyle skiing an official skiing sport in 1979, paving the way for its future inclusion in the Winter Olympics.