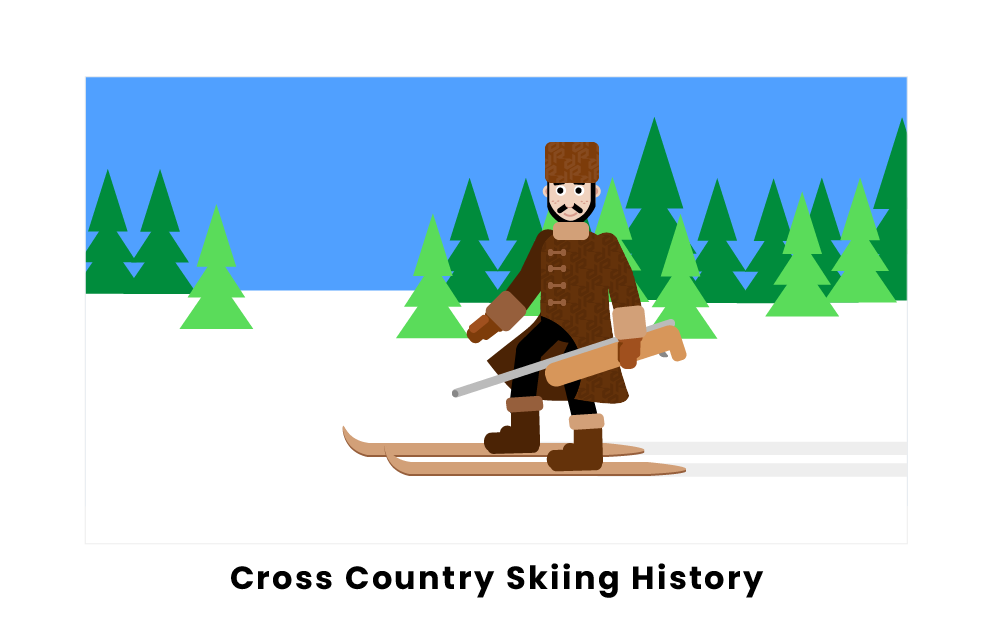 Cross country skiing is strongly associated with Nordic people and the Winter Olympics. Throughout its long and exciting history, cross country skiing has developed from a prehistoric transportation and hunting practice into a set of military exercises before finally becoming the highly competitive sport that we know today.

Cross country skiing is an ancient winter pastime that dates back millennia. At its creation, it hardly resembled the sport we know today. The word ski comes from an old Norse word, and the Nordic people were some of the first to practice skiing.

Along with indigenous people in what is now China and Russia, the Sámi people (indigenous residents of modern-day Scandinavia) began using skis as a method of transportation and an aid to hunting at least 5,000 years ago. Starting in the 1200s, Sweden, Norway, and other Nordic countries began using ski troops as part of their militaries. In 1206, the Norwegian Berkebeiner clan infamously transported their infant king by ski over a great distance to safety.

Early skiing was different from modern cross country skiing in that skiers only used a single pole or spear for support. One ski was commonly much longer than the other, with the short ski providing traction and the long ski used for gliding over the snow. A Danish-Norwegian general named Carl Schack Rantzau laid the groundwork for modern skiing in 1767 when he established four classes of military ski competitions, one of which was a long race. Although competitors were required to carry a rifle, the long race was otherwise similar to modern cross country ski races.

Cross country skiing was already a major part of winter sports when the International Olympic Committee (IOC) began discussing a winter counterpart to the Summer Games in the early 1920s. This led to the sport’s inclusion as one of the original 16 events over five sports that comprised the first Winter Olympics in Chamonix, France, in 1924. The other skiing events were Nordic combined, ski jumping, and military patrol, a predecessor to biathlon.

In addition to advancements in the design and materials used in skis, poles, bindings, and boots, the widespread adoption of the skate skiing technique revolutionized cross country skiing as a sport in the mid-to-late twentieth century. The technique, in which a skier uses their back ski to push off in an oblique direction, had previously been used on snowy roads and in ski orienteering and ski marathons. Bill Koch was the first to popularize its use in cross country skiing competitions, skate skiing to a championship in 1982. Although the technique faced opposition at first, by 1986 the FIS was sanctioning competitions that allowed skate skiing, and two years later, it was permitted in the 1988 Winter Olympics.

What is the history of cross country skiing?

Cross country skiing is an ancient activity that began as a mode of transportation in modern-day Scandinavia, Russia, and China, as early as 3000 BCE. The Nordic countries began using ski troops as part of their militaries in the 1200s. Interestingly, a Danish-Norwegian general was the first to conceive of a cross country ski race as a form of military exercise in the late eighteenth century. Cross country skiing was one of the events included in the first Winter Olympics in 1924.

Schack Carl Rantzau invented cross country skiing in 1767. An indebted nobleman from Denmark, Rantzau joined the army as a teenager and eventually became the general in command of Danish forces in Norway. In this role, he organized four classes of ski competitions as forms of military training. Alongside precursors to biathlon, downhill ski racing, and slalom, Rantzau created the long race, which required armed skiers to cover 2.5km of snowy ground in under 15 minutes.

Where did cross country skiing start?

Cross country skiing started in the snowy northern tundras of Scandinavia, Russia, and the Xinjiang region of China. Over 5,000 years ago, indigenous people from these areas began to use primitive skis to traverse large distances over snow, particularly for hunting. Modern cross country skiing has its origins in Scandinavia, where Denmark, Sweden, and Norway used ski troops in their militaries. A military ski competition in Norway was the first example of a cross country ski race resembling modern competitions.