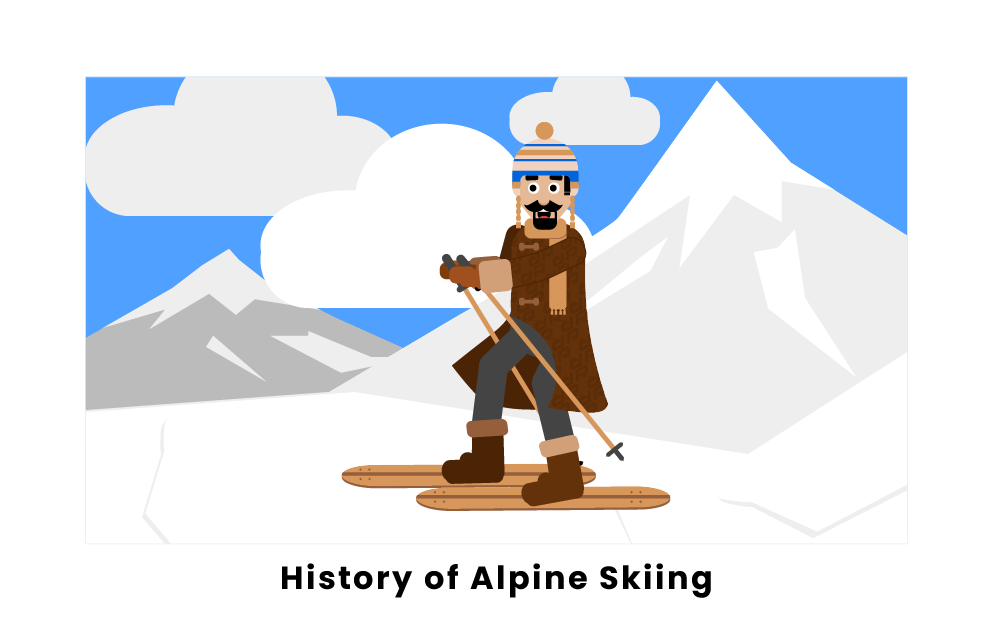 Skiing is one of the world’s most popular winter sports, pairing exhilarating speeds with the need for incredible precision and dexterity. Alpine skiing is a particularly intense variation of downhill skiing, in which athletes ski down extremely steep slopes, often weaving through gates and other targets in the form of an obstacle course. The history of modern alpine skiing dates back to the 19th Century, but the history of skiing altogether is far longer.

Forms of the sport which became known as skiing have an extremely long history, with some dating back to prehistoric times. Fragments and pieces of well-preserved wooden planks used as skis have been found frozen in ice or buried in places like Russia, with carbon dating determining them to be as old as 8000-7000 B.C.E. These early forms of skis were primarily used as transportation and for many years, even though skiing existed as an activity, it was not a sporting event. In its early days, skiing was used as a means of transportation to navigate inhospitable mountain regions that were difficult to travel through due to heavy snow and ice. Skiing was also primarily used by the military and was a form of transportation almost exclusive to northern European countries, such as Norway, Sweden, and Russia, who even used skiing in wars with each other.

Modern downhill skiing is generally assumed to have emerged in the mid-19th Century, around  1850. Its development is attributed to Sondre Norheim, a Norwegian skier who first developed and popularized skis with curved sides that were more aerodynamic and fit for sharp turns. Norheim also utilized stiff bands for his heels, which were made of willow and, when paired with his curved skis, allowed him to develop various unique forms of turning while skiing downhill. Additionally, Norheim is credited with inventing the Telemark and Christiana turns. The Telemark turn, named for the region of Norway where it was invented, is a type of skiing where the skier lifts their heels and bends their knees to make a turn. The Christiana turn, named for the former name of Oslo, the capital city of Norway, involves forming a wedge with the skis and then bringing them parallel in the direction of the intended turn.

Originally meant solely for transportation, skiing quickly developed into a sport after Sondre Norheim’s developments, and soon, modern alpine skiing took shape. Though non-military skiing competitions started as early as the 1840s, the first Norwegian national skiing competition was held in 1868, and none other than Sondre Norheim was the winner of the event. Over the following decades, alpine skiing became popular across Europe and then moved to the United States, where it became a popular sport among miners during the winter months. Soon, the concept of slalom skiing (alpine skiing that involves a series of turns through markers on a curving, downhill course) was developed, and the first slalom competition was held in Mürren, Switzerland, in 1922, organized by Sir Arnold Lunn, the inventor of slalom skiing.

Based on the growing success of alpine and slalom skiing, the sport was considered for the Olympic Games in the early 1900s. Men’s and women’s events first debuted at the Garmisch-Partenkirchen Winter Games in 1936, with a single combined event in both downhill and slalom skiing. In the 1948 St. Moritz Winter Olympics, separate races for downhill and slalom were added to the program alongside the combined event. Four years later, in 1952, the Oslo Winter Olympics added the giant slalom event, and a final event, the super-giant slalom, was added to the program in the 1988 Calgary Winter Olympics. These five events form the program for men’s and women’s alpine skiing in the Winter Olympics to this day.

What is the history of alpine skiing?

The history of modern alpine skiing dates back to the 1840s and 1850s when non-military skiing competitions began to be held in Norway, transitioning skiing from a method of transportation to a sport for the first time. A few years later, Norwegian skier Sondre Norheim discovered new ways to turn while skiing and developed new curved skis and stiffer heel bands to help make his turns better. This led to the development of alpine and slalom skiing, which quickly spread across the world and soon became an Olympic sport.

Alpine skiing combined was primarily invented by Sir Arnold Lunn, a British skier who developed the sport of slalom skiing, which was merged with the earlier form of downhill skiing popularized by Sondre Norheim to form the combined. Lunn was instrumental in bringing slalom skiing to the world stage, organizing the first-ever slalom event in 1922, held in Mürren, Switzerland. When alpine skiing became an Olympic sport in 1936, the combined event was the only event in the program, and it continues to be the main event in the lineup to this day.

Where did alpine skiing start?

Alpine skiing began in Norway in the mid-1800s. Although evidence of skiing as an activity stretches back much further, even to prehistoric times, where it seems to have been practiced by early humans living in what is now modern-day Russia. Skiing was originally a military activity, as well as a means of transportation through snowy, mountainous regions. However, in the 19th Century, skiers in Norway began to practice it recreationally and started holding competitions in the 1840s. Soon afterward, the new developments by Norwegian skier Sondre Norheim led to the modern version of downhill alpine skiing, which quickly became a popular sporting activity.