About Freeskiing - An Overview 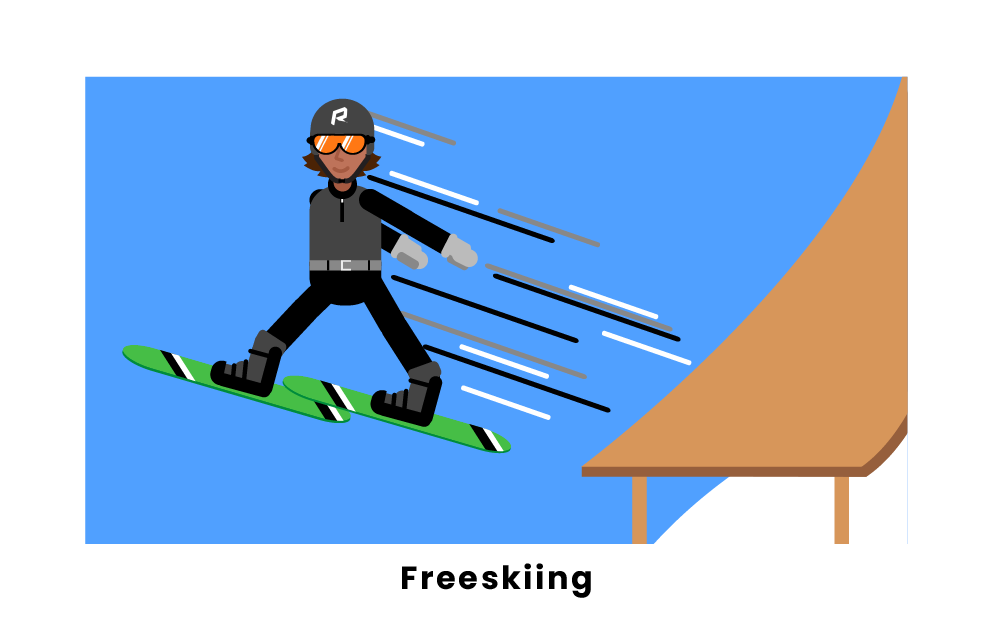 Freeskiing is an action-filled sport with many different astonishing tricks. There are two main disciplines of freeskiing: moguls and aerials. Mogul events involve skiers maneuvering through a bumpy slope and finishing off the competition with a singular jump to perform tricks. Aerial events challenge skiers to perform elaborate tricks off of large jumps, which usually involve flips, twists, turns, and grabs. Both events are points-based, with moguls featuring a timing aspect as well. For mogul events, there are five judges who determine the score on the turns and two judges who determine the score for tricks they do in the air. Speed is also a factor in the competitors' score. For aerial events, five judges determine the score of a competitor based on their take-off, height and distance in the air, landing, and form. There is also a difficulty component that is factored into one's score for aerial events.

Freeskiing tricks fall into two categories: inverted and upright. Any tricks that involve a skier's feet and skis going above their head are categorized as inverted tricks. Upright tricks are mainly jumps in which the skier is not “inverted” and has their feet below their head. For these tricks, skiers gain speed and jump off of ramps that are up to 100 feet tall. The Winter Olympics is one of the largest events to feature freeskiing and has done so since 2014. Before American athletes go to the Olympics, they go through extensive training and compete in local, regional, and national competitions that are governed by the United States of America Snowboard and Freeski Association (USASA).

Freeskiing is a winter sport that combines skiing and acrobatics. Freeskiing has two consistent events no matter the competition: aerials and moguls. During aerial skiing, skiers execute tricks in the air, including flips and rotations. Aerial freeskiers are scored based on air, form, and landing with a maximum score of 150 points. The difficulty of the tricks performed is also taken into account during scoring. Mogul skiing includes maneuvering large bumps and making sharp turns. A skier’s score for mogul events is based on speed, turns, and jumps/air, carrying a maximum score of 100 points. For both types of freeskiing, the skier with the highest score wins the competition.

Where are the best places to go freeskiing?

One of the best ski resorts for freeskiing is Breckenridge Resort, Colorado. There are four terrain parks on the mountain in total. One of the terrain parks is called Freeway, which provides a challenge for even the most experienced freeskiers. Freeway features numerous large jumps, rails, boxes, a 22-foot superpipe, and an 18-foot halfpipe. Park Lane, another one of the four terrain parks, has jumps that range from 20 to 45 feet long. Highway 9 is a terrain park known for being great for beginners, helping these skiers get familiar with the types of tricks one can do. Frontier, the last of the mountain’s four terrain parks, is known for intermediate skiers and has medium jumps, ramps, and pipes.

What equipment do I need to go freeskiing safely?

To go freeskiing safely, an athlete will first and foremost need a quality pair of skis. The style of skis varies depending on the type of skiing an athlete plans on using them for, whether it be moguls or aerials. A skier will also need a helmet to protect their head from any major injuries that may occur while skiing on the mountain. Other pieces of equipment needed for an athlete to freeski safely are poles, a ski suit, goggles, boots, gloves, and knee patches.

Pages Related to About Freeskiing - An Overview