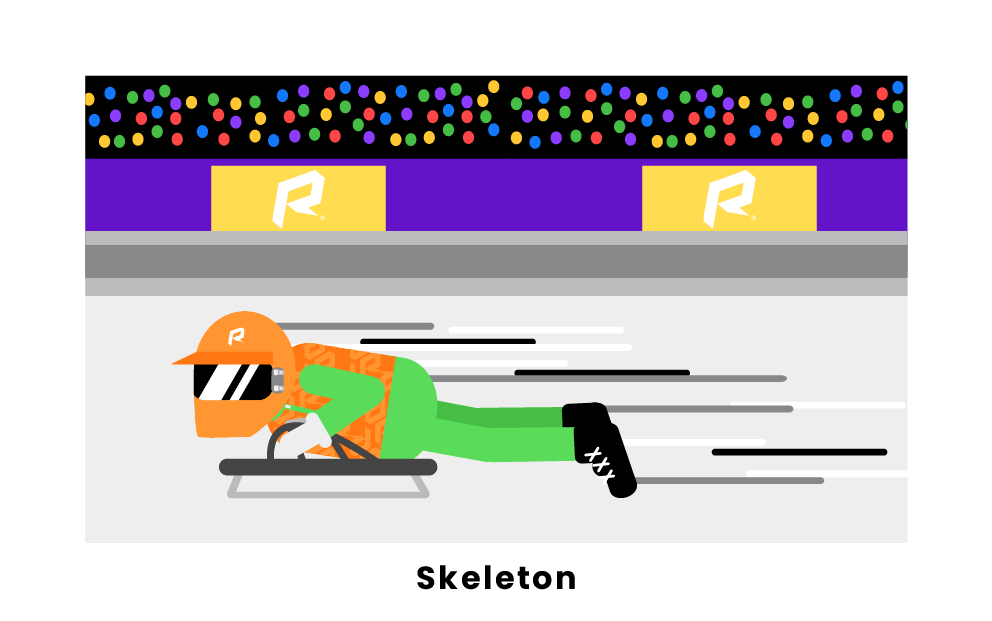 Skeleton is a high speed winter sport with a pretty simple premise. All you have to do is go from the top of an icy track to the bottom as fast as you can. The way you do this is on a tiny sled. At the top of the track you sprint as fast as you can while bending down and holding your sled. Then you jump on the sled, on your stomach, and lie flat. You then have to navigate a few turns as quickly as you can before reaching the finish line. Your sled has no turning mechanisms, and no brakes. Everything you do is solely with your body. 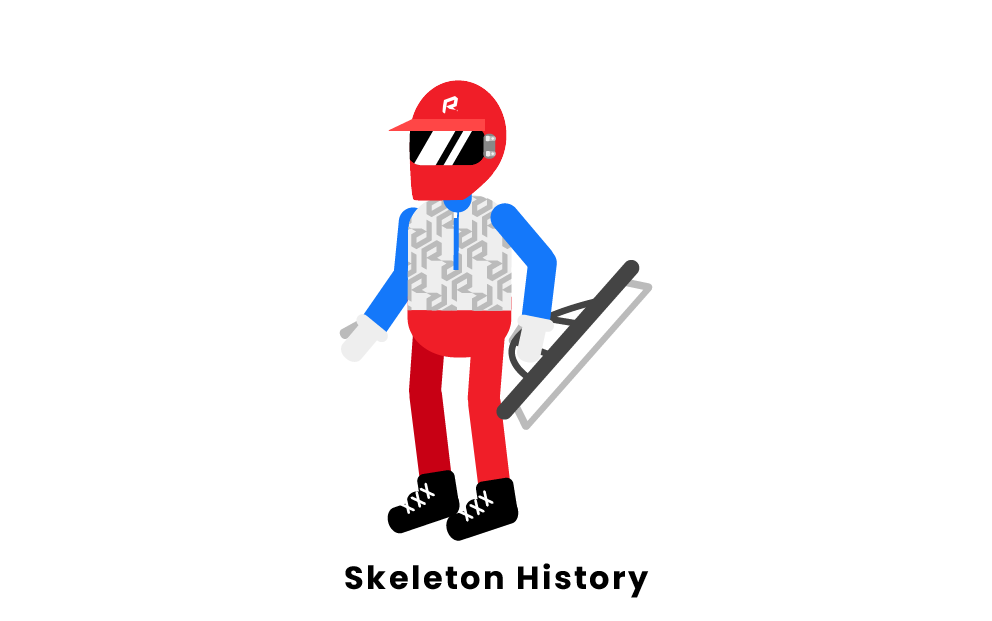 People have been sitting on sleds and moving down ice and snow for as long as humans have lived in cold weather. There is evidence of sledding as a sport going back as far as the 1500s. Skeleton itself has a pretty clear invention story though. The first ever skeleton race took place on the Cresta Run in St. Moritz, Switzerland in 1887. In 1892 the fully metal sled was introduced to the sport. Because the sled looked bony people started to call it a skeleton. Skeleton quickly became popular in the winter sports world. When the winter Olympics were hosted in St. Moritz, in 1928 and 1949, skeleton was one of the sports played. It wasn’t until 2002 that skeleton became a full-time Olympic Sport. 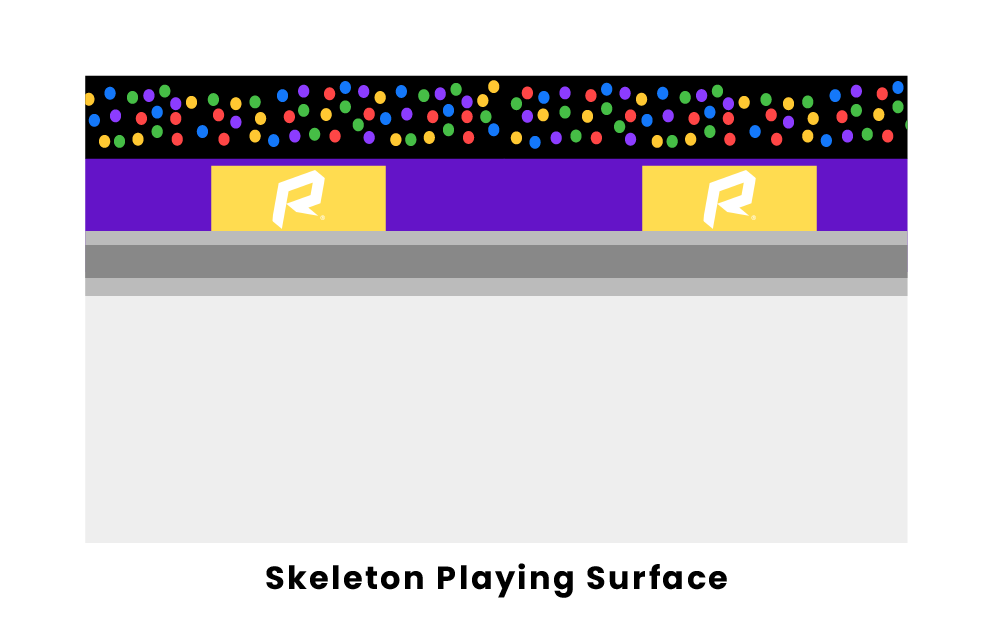 Skeleton is an ice-track sport. Sports that take place on ice tracks like skeleton, bobsled, and luge are very unique. The track, unlike in athletics, is not consistent. Depending on where you are the track for the skeleton will be different lengths, different steepnesses and with different turns. For example, the skeleton track for the Pyongyang winter games in 2018 was 1,376 meters (4514 feet) long. In Sochi, where the 2014 Olympics were held, the track was 1,500 meters (4921 feet). The consistencies between tracks is that all of them have grooves in the ice at the start. This helps keep the skeleton’s runners, or blades, in place. 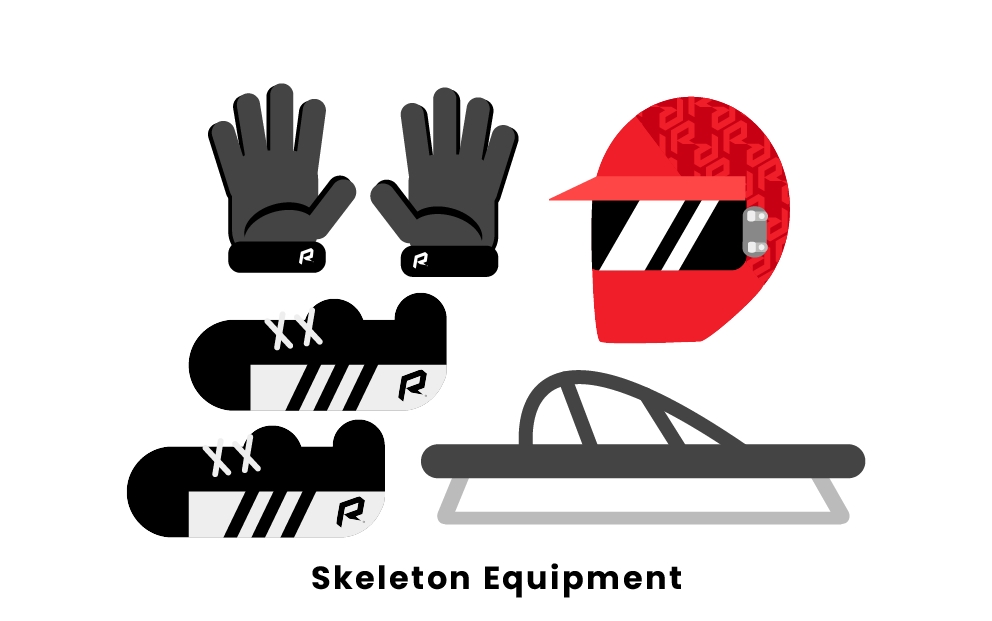 There is very little equipment that you’ll need to compete in skeleton. However, you should only buy this equipment if you have access to a skeleton track. There aren’t very many tracks worldwide so you have to know where they are and be dedicated before you buy any gear. Additionally, to get good equipment can cost anywhere from $5,000 to $30,000+ at higher levels. Once you’re ready the equipment you’ll need is: 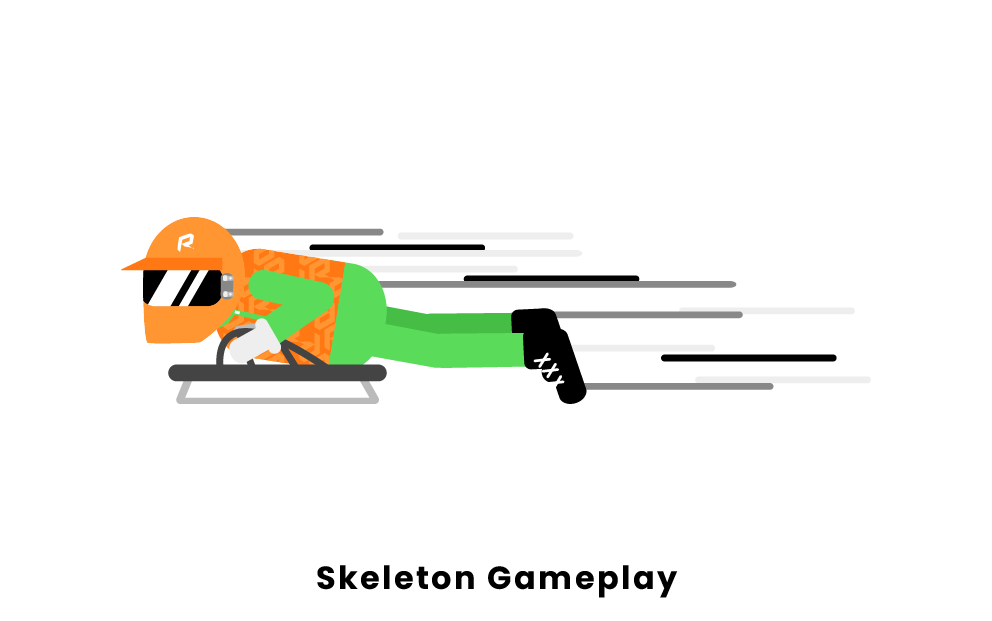 The gameplay for skeleton is one of the most simple ones possible. Each competitor takes turns trying to sled from the top of the course down to the bottom as fast as they can. At the Olympics, and in most races, every slider gets four tries. The lowest combined time wins. There are a few different parts of a race. At the start you sprint for about 50 meters. Then you want to hop on your sled. For the rest of the race you move down the track on your sled. After crossing the finish line you put your feet down to slow down since there are no breaks on a skeleton sled. Often during a race there will be mats at the finish line to help you slow down. 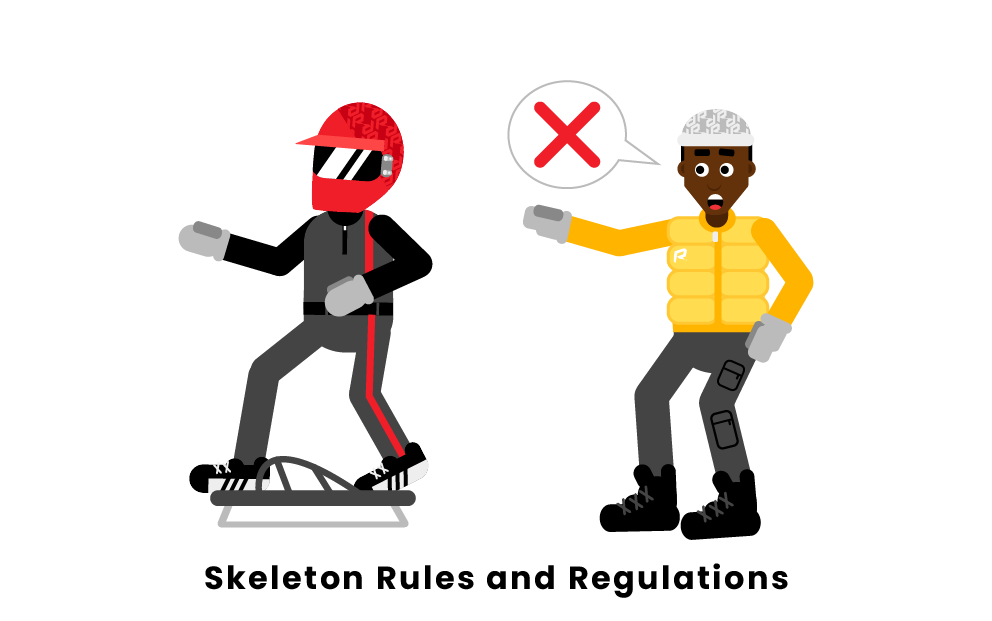 There aren’t a ton of rules for skeleton. Most of the skeleton rulebook discusses qualifying for events such as the Olympics and medical safety. However, as a slider, there are a few rules to follow. 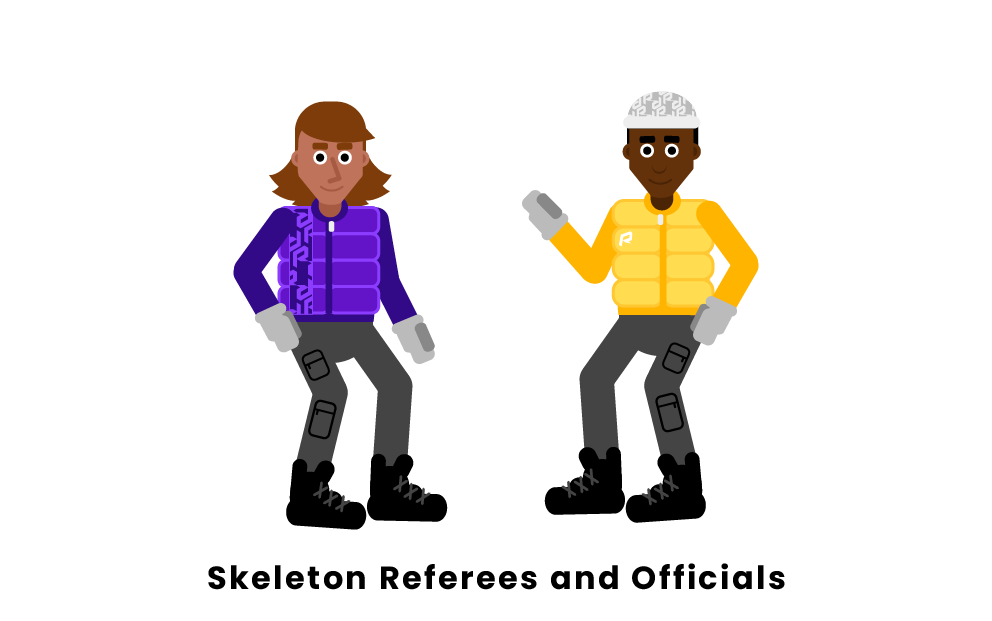 The referees in skeleton are called jurors. They are a collection of people who watch every moment of a skeleton race. They are the ones who have to make sure your sled is legal before the race, and they are the ones in charge of the timing. Though most timing now is electronic, they have secondary timers and they make sure the electrical timing is correct. Jurors have the final say on any rules. 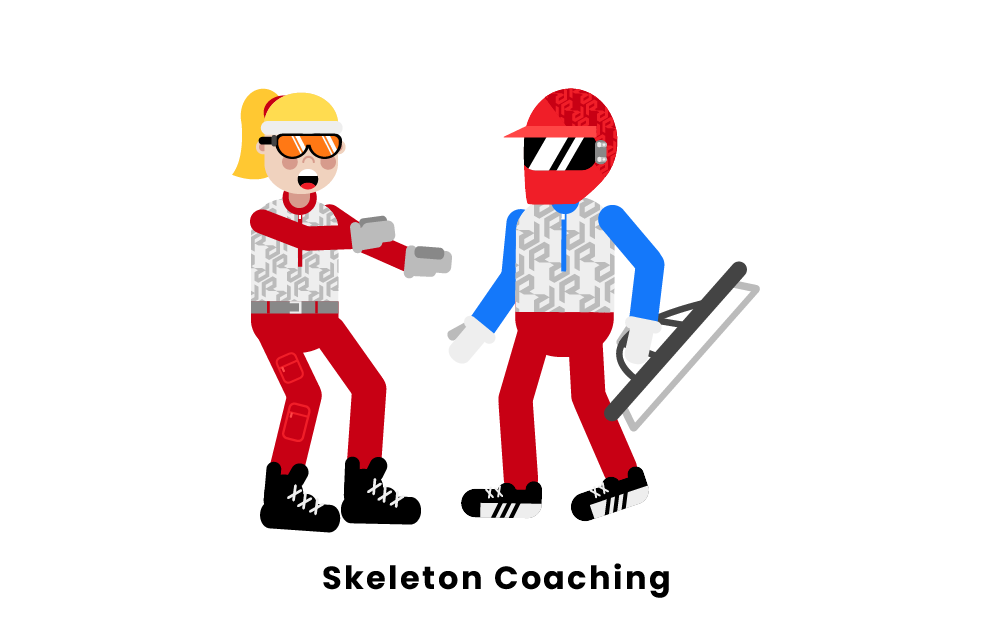 When you watch skeleton there are only two people you will see at the top of the course. The first is the slider and the second is the coach. Coaching in skeleton is simple partially because skeleton is such a simple sport. The part of coaching that you’ll see on TV is the motivation. Timing your start is important and so often a coach will count the start off. Once you start the sprint your coach will yell and motivate you to get a better start. Off of the track coaches will help you memorize the turns of a course and remind you of the target goals for a specific race. 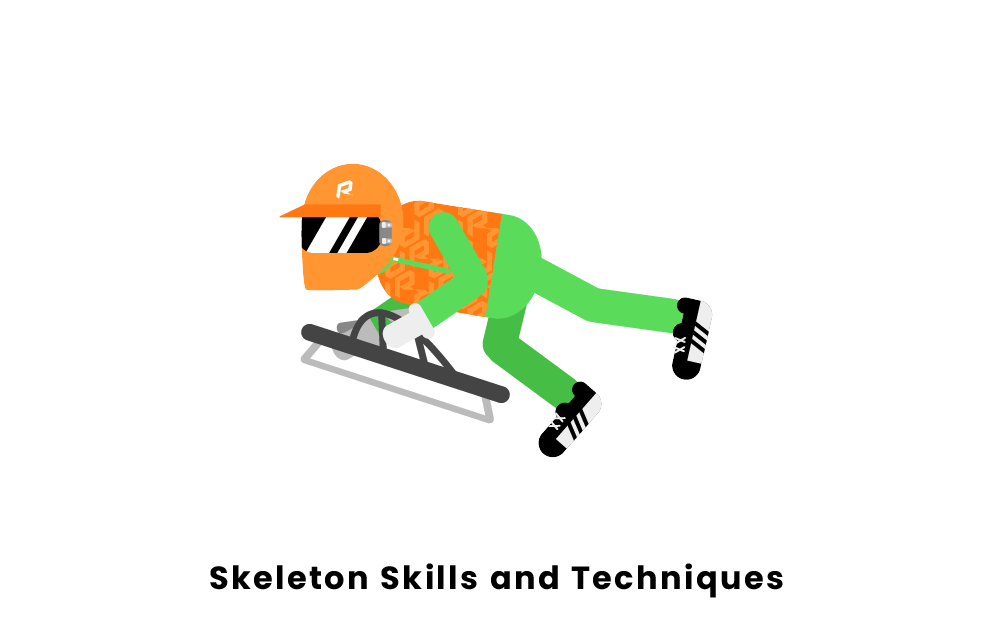 A skeleton race can be split into two parts. The first part is the starting sprint. Your starting sprint is about 50 meters and it is important to get a good strong sprint to get momentum for the rest of the race. It goes without saying but during this sprint you want to bend down and hold onto your sled.

The second part is the technique during the slide. The most important part of this is the chin tuck. You want to tuck your head and make your body as aerodynamic as possible. However, you want to see where you’re going so you have to raise your head and look up while also trying to keep your chin tucked to your chest. 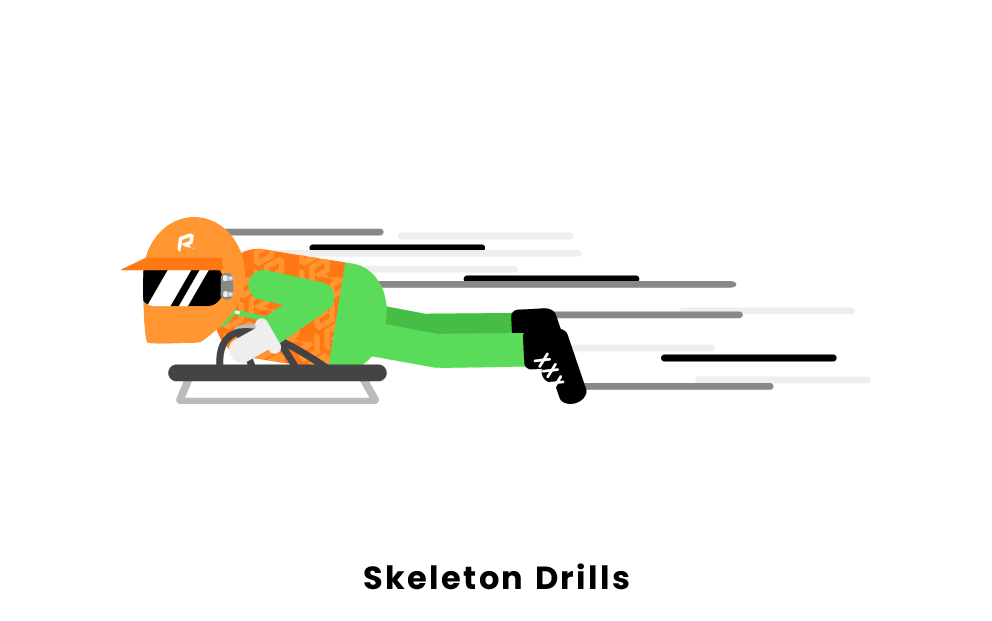 The best way to get better at skeleton is to practice it. However, skeleton is very taxing on the body and very dangerous. That is why you don’t want to do too many runs in one practice session. That’s when you want to get creative in practice sessions. One thing to do is to practice the sprint. The faster you sprint the better your run will be. Practicing your springt, on the ground and then on ice is very important. Another drill, especially when you’re getting used to a new track is to do a “slow run.” In this, you push off slowly or have someone push you off starting lying down. It’ll obviously be a slower run but it helps you get accustomed to the turns without the speed of a regular run where you sprint to start and dive onto your sled. 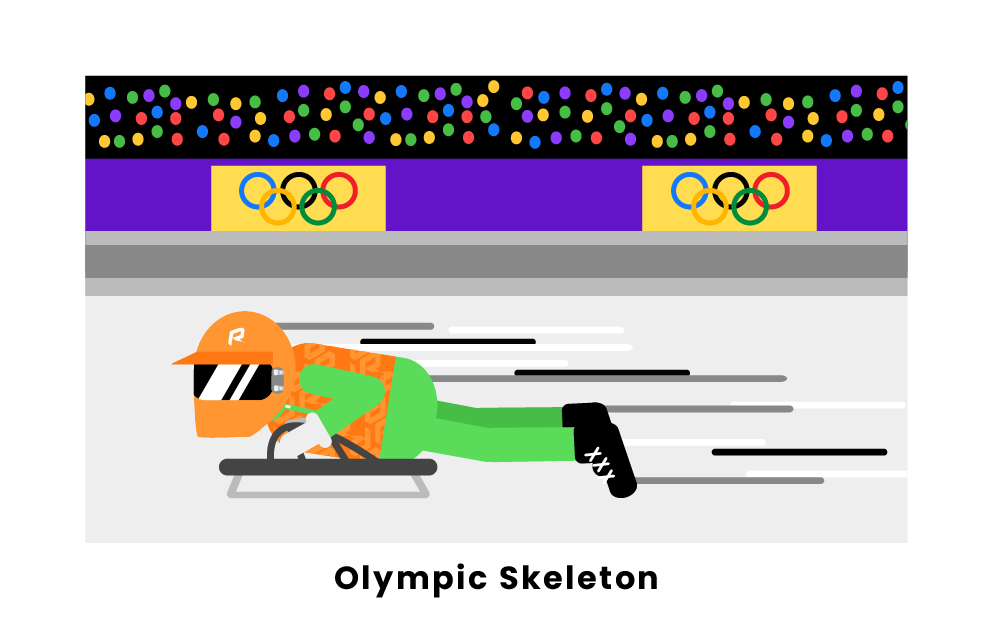 Skeleton is a popular sport at the Olympics. The Olympics are probably the only time that you’ll see skeleton unless you’re a big skeleton fan. Skeleton was in the Olympics for the first time in 1928 when it was hosted in St. Moritz, where the sport was founded. Skeleton came back twenty years later when the Olympics went back to St. Moritz in 1948. It wasn’t until 2002 that skeleton became a full-time Olympic sport.

Skeleton is a winter sport made up of sliding headfirst down a track as fast as you can. It requires very little equipment, mostly just protective gear and the actual skeleton that you ride on. The sport is highly popular during the Winter Olympics due to its high speeds and exciting finishes.

Is Skeleton an Olympic sport?

Skeleton is an Olympic sport and has been a permanent part of the Olympics since 2002.

Why is the sport called skeleton?

Some people may think that skeleton got its name because of how dangerous it is. However, the true story is that when the first metal skeleton sled was brought out people said that it reminded them a bit of a human skeleton.

What is the difference between skeleton and luge?

Pages Related to What is Skeleton?