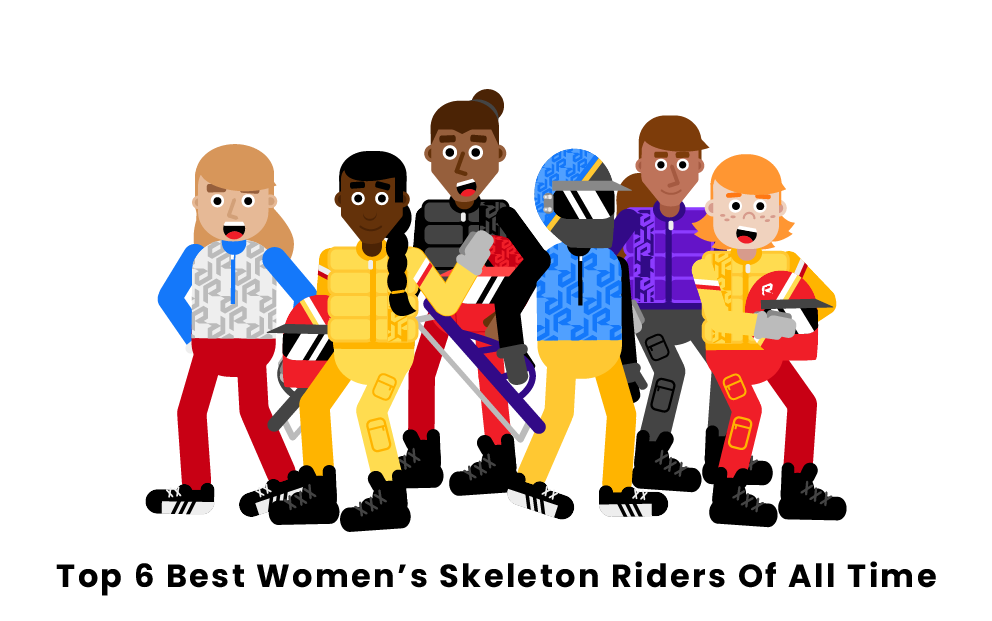 Skeleton is one of the most entertaining and dangerous sports in the Winter Olympics. With such high speeds at play, great reflexes and skill are required to succeed within the sport. Certain athletes have distinguished themselves amongst the competition, making them the best skeleton riders ever. Keep reading to learn about the top six best women’s skeleton riders of all time.

Who are the best women’s skeleton athletes of all time?

Yarnold was born in Sevenoaks, Kent, in Great Britain, and knew she wanted to be an athlete when she witnessed Denise Lewis in the 2000 Olympics. After a lack of initial success, she found a program that helped her get involved in the British National Skeleton program. She developed a knack for the sport and made her Olympic debut in 2014, where she won gold. She followed up this appearance by winning gold again at the Pyeongchang Olympics in 2018. This was the first time an athlete from Great Britain has defended their crown in the Olympics. Along with her Olympic success, she captured a gold and two silver medals at the IBSF World Championships.

While Hermann does not have many Olympic accolades, she is still one of the best in her sport. Born in Germany, she began professional competition in 2007 and joined her home country’s national team in 2008. She participated in one event at the 2018 Pyeongchang Olympics but failed to medal, finishing fifth. However, she won the individual IBSF World Championship four times, including three consecutive world titles. She also captured 13 World Cup victories and one overall gold medal. Hermann has finished in the top three in overall rankings in every single World Cup season.

Jacqueline Lolling had success from a very young age, beginning her career in 2007 at the age of 12. Lolling is also of German descent, adding to the list of successful German skeleton riders in the past decade. She would continue on to become German National Champion by the age of 15. After entering as the favorite to win the tournament, she won bronze at the 2012 World Junior Championship. Lolling won a silver medal at the 2018 Pyeongchang Games after participating in both 2014 and 2018.

Noelle Pikus-Pace grew up in America as one of the best skeleton riders the sport has ever seen. She suffered a serious leg injury at the beginning of the 2006 season, causing her to sit out the first half of the year. Pikus-Pace came back even better and would go on to win the World Championship the following year in 2007. Appearing in two different Olympics in 2010 and 2014, she captured one silver medal at the 2014 Games in Sochi. This was even more notable because she had initially announced her retirement following the 2010 Olympics to focus on motherhood, but came back in 2014 to win a medal.

Maya Pedersen-Brieri participated in three Olympics from 2002-2010 and captured a gold medal at the 2006 Games. Following her win at the 2006 Winter Olympics, she was the flag bearer for her home country Switzerland at the closing ceremonies. She also won the World Championship the previous year in 2005, making this one of the more dominant periods of her career. Additionally, Pedersen-Brieri was a five-time gold medalist at the World Cup, cementing her place as one of the best skeleton riders of all time.

Who is the greatest women’s skeleton rider of all time?

Lizzy Yarnold is the greatest women’s skeleton rider of all time. She won gold at both the 2014 Olympic Games in Sochi and the 2018 Games in Pyeongchang, making her the first-ever British athlete to successfully defend their gold medal performance at the Olympics. Further, she won three medals at the World Championships, including one gold and two bronze medals. Yarnold was not initially successful but grew into one of the most dominant and successful forces in the sport’s history.

What women’s skeleton rider has the most IBSF World Championship gold medals?

Tina Hermann of Germany has won the most IBSF World Championship gold medals. She won four gold medals within five years, from 2016-2021. Her world titles came in Igls in 2016, Whistler in 2019, and Altenberg in 2021. One of the best the sport has ever seen, Hermann has also never finished below the top 3 in the World Cup season.

When were skeleton events for women added to the Winter Olympics?