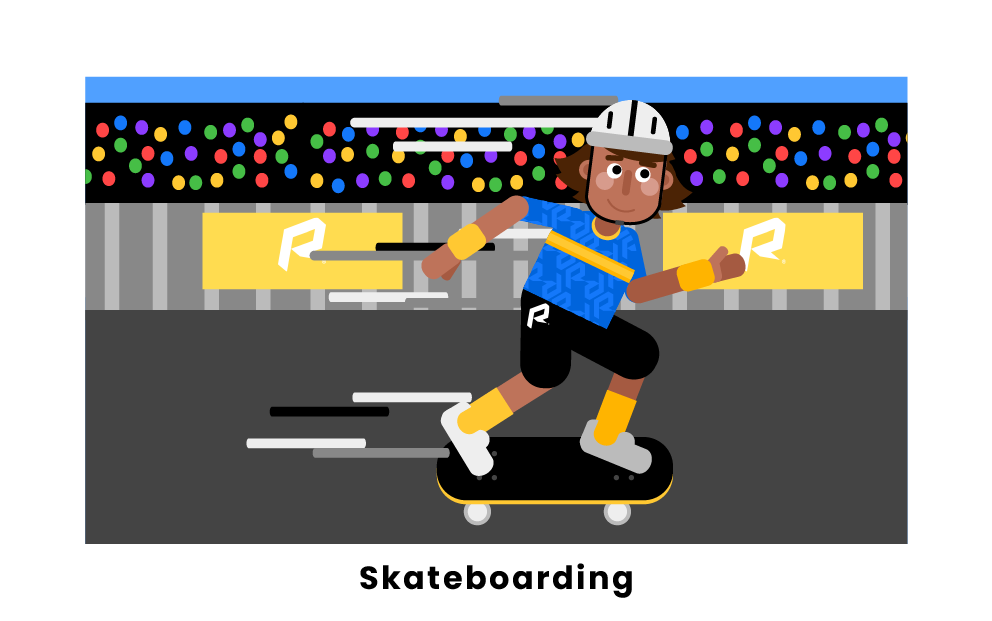 Skateboarding is both a sport and recreational activity. It involves doing tricks and maneuvers on a skateboard. The sport is popular among young people in big cities on the east and west coasts. There are also two different types of skateboarding: vert and street style. 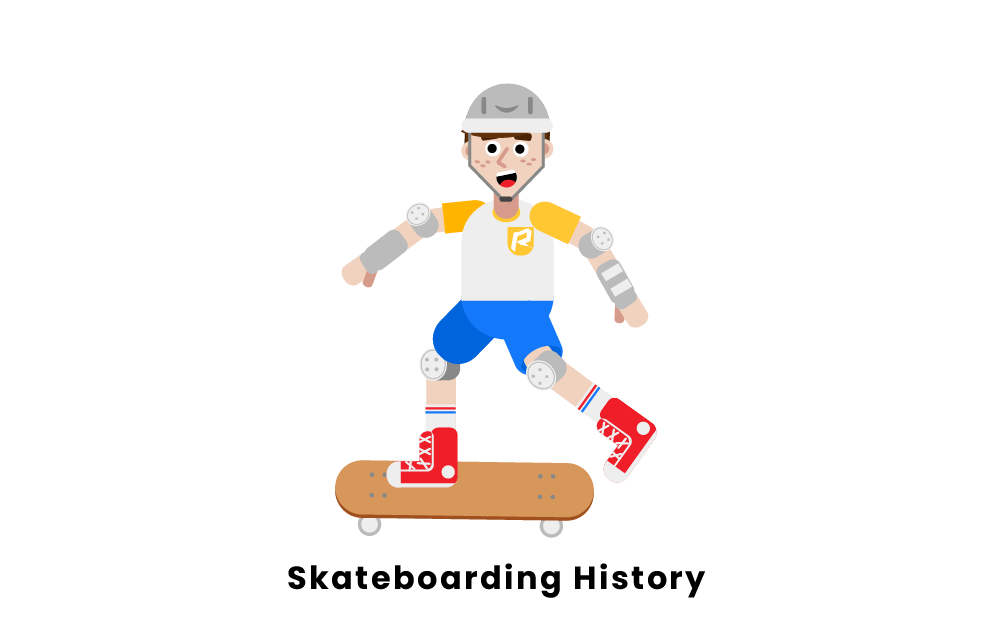 The exact year that skateboarding was invented is unknown. However, it was probably invented in the late 1940s. California surfers invented it as an alternative when the ocean waves were too flat. Skateboarders were known as "asphalt surfers," and they used empty swimming pools as their playing surface. In 1959, the first commercial skateboards were released to the public. 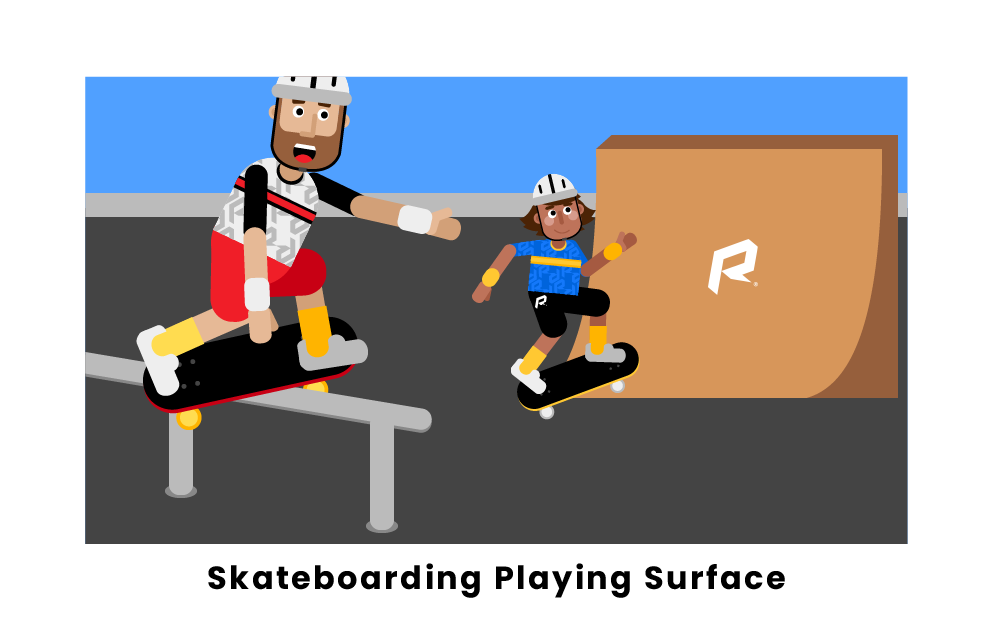 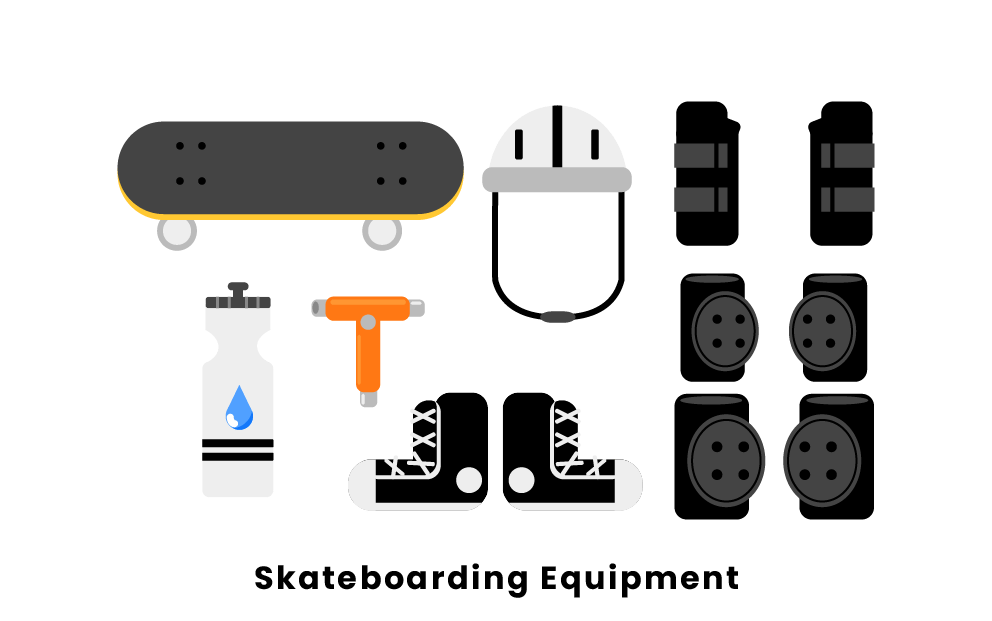 All that is needed to start skateboarding is a skateboard, which is a flat deck with 4 wheels. Many skateboarders choose to wear a helmet, wrist guards and knee pads in order to protect themselves from big, dangerous falls. Also, a good pair of sneakers is essential as skateboarding wears out the soles of shoes quickly. 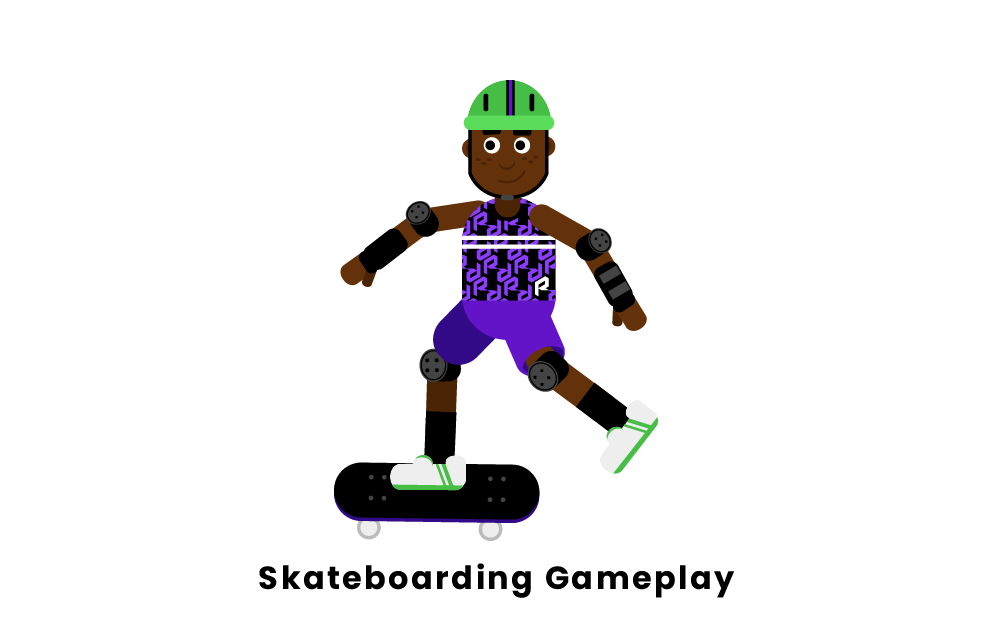 Skateboarding is unique in that a skateboarder can choose any kind of trick or move that they want to show off. In larger competitions, skateboarders are judged on many different factors. These factors can be things like speed, style, difficulty, tricks and originality. A skateboarder usually has a set block of time to show off his or her skills before being scored. 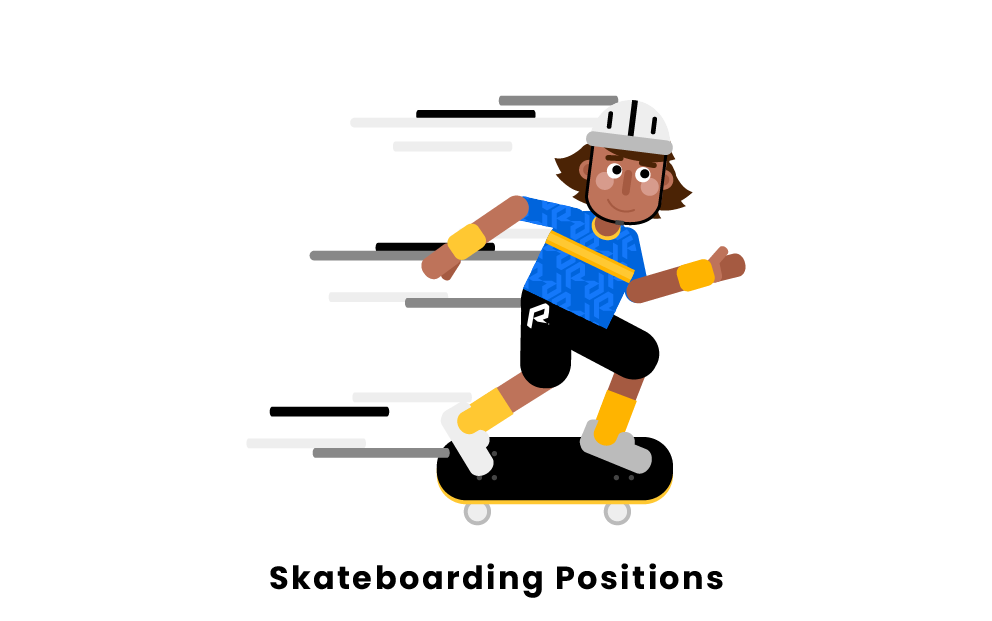 There are only two positions during a skateboarding competition: the skateboarder and the judges. The skateboarder performs his or her tricks and after their time is up, a panel of five judges scores the athlete on the performance. 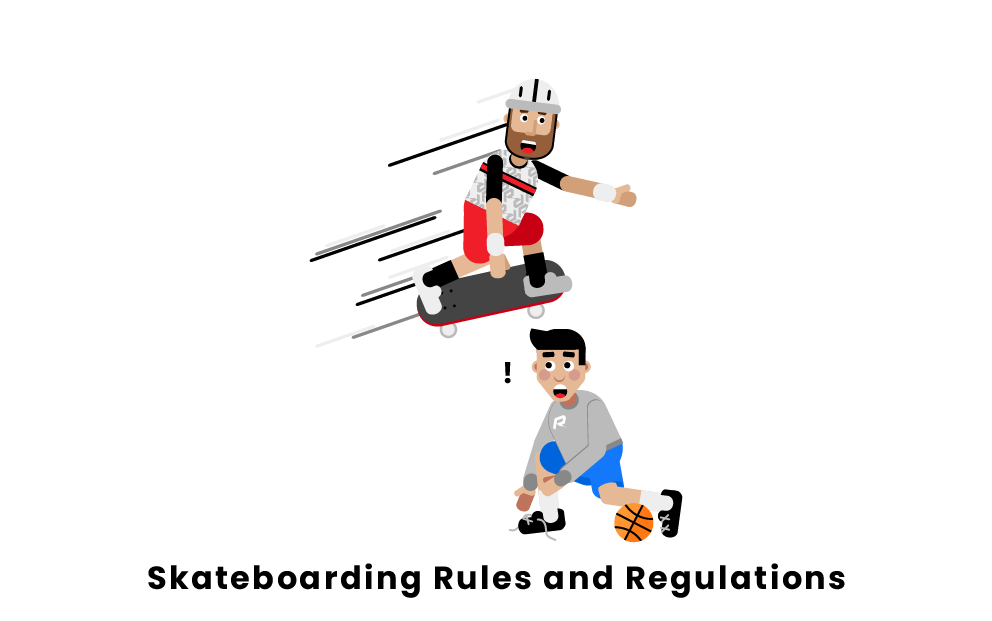 Skateboarding is one of the only sports where there really are no rules or regulations. Skateboarders are free to perform any tricks they would like and have the freedom to move anywhere they want within the skatepark or terrain they are skating on. In competition, the only strict rule that skaters need to follow is making sure they do not go over their allotted time slot. 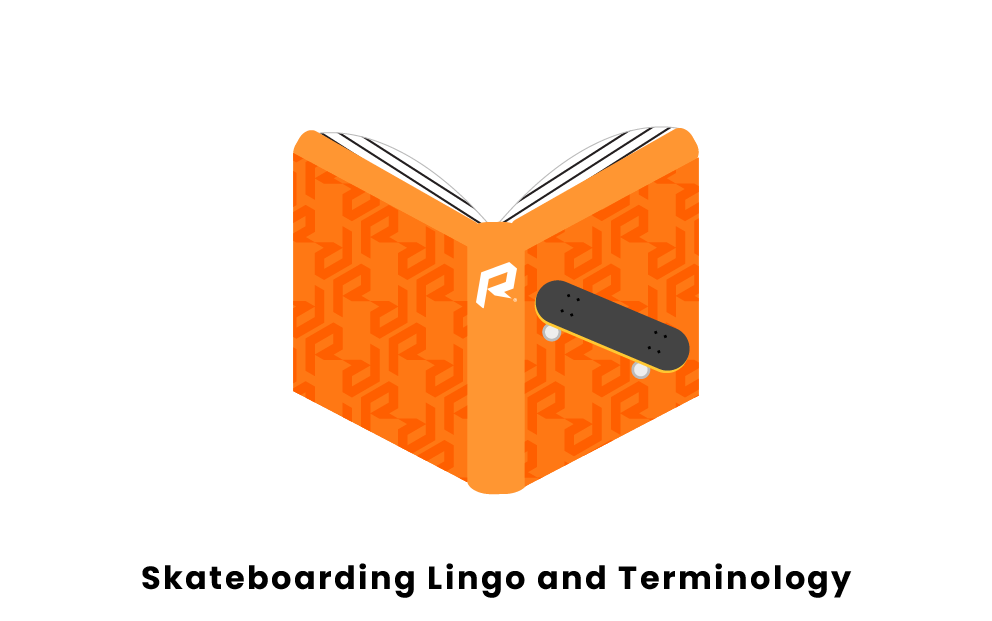 An essential part of skateboard culture is the lingo and slang used by skaters. This terminology is often used to define different tricks. In skateboarding, a skater is allowed to name a trick that he or she invents. As a result, new terminology is added all the time. Here is a list of a few of the slang terms used in the sport.

Bail: When a skater falls of their skateboard

Ollie: A skateboarding trick when a skater is able to jump into the air and the board follows. This is done without the skater's hands.

Kickflip: A skateboarding trick where a skater flips their board 360 degrees and lands right back on it.

No Comply: Any trick where the front foot is on the ground.

Primo: When a skateboard lands on its side. 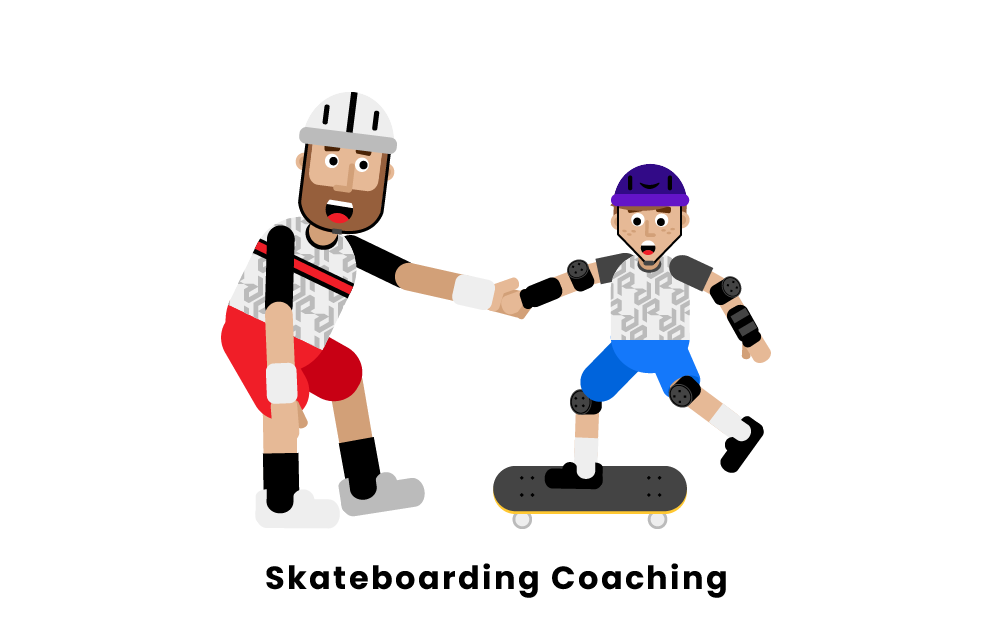 Many skateboarders are self-taught, and rely on friends and other resources to learn the sport. It is not a common practice for skateboarders to have coaches. Skateboarding coaches can help skaters sharpen their skills and gain confidence. This is especially helpful for skaters just starting out. 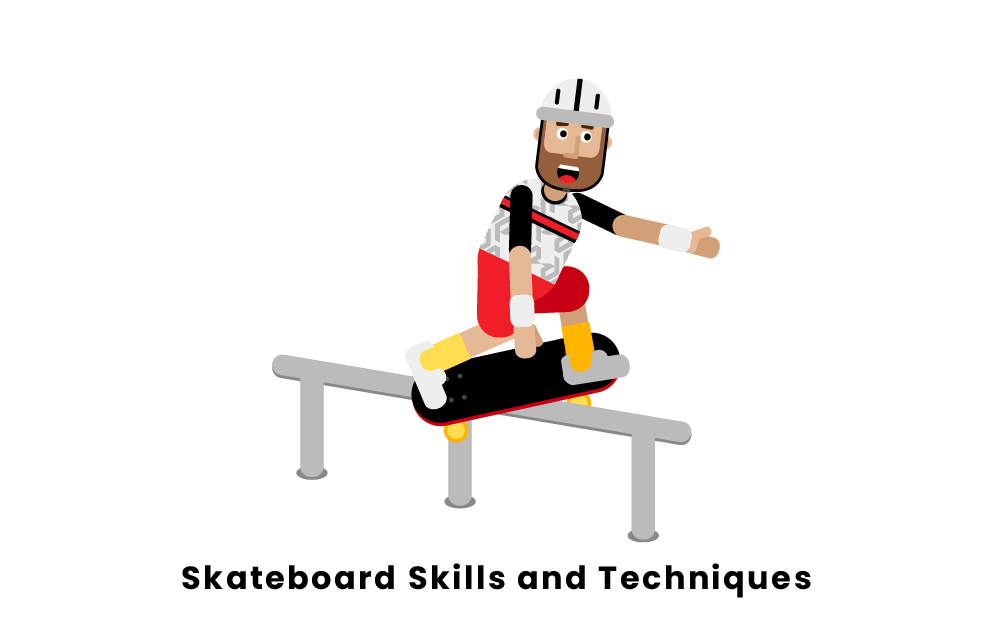 There are some essential skateboarding skills that are useful for all levels. These skills include the ollie, tic-taking, and the kickflip. Once a skater has these skills down, more complicated tricks become easier to attempt. Skaters can also improve their balance and core strength, which is important to the sport. 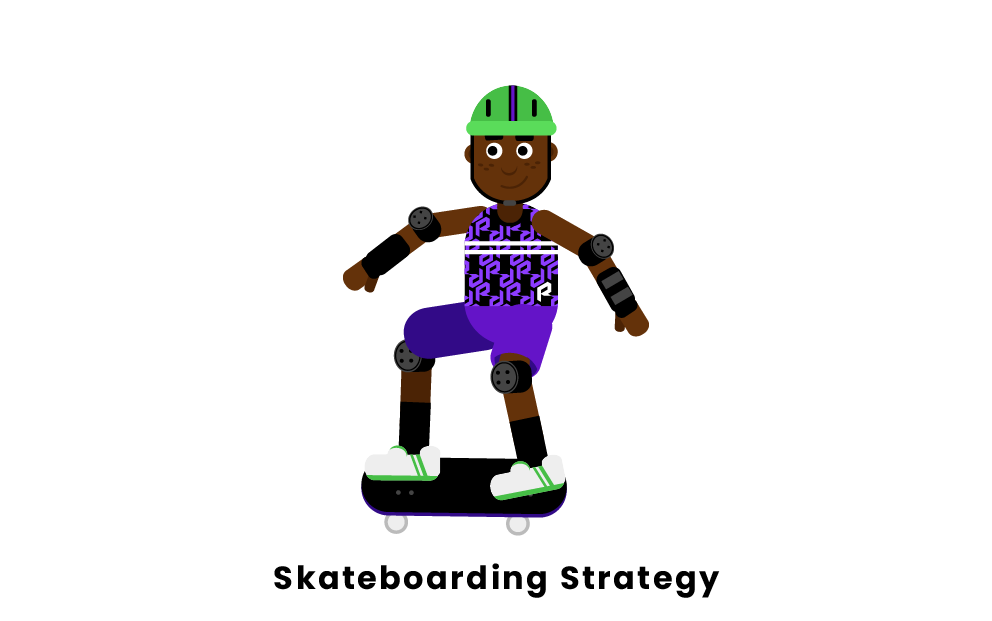 There is not much strategy to skateboarding. In competition, skaters learn as many tricks as they would like and perform them in front of judges. The most important strategy to competitive skateboarders is knowing the terrain and what tricks are possible on different surfaces and structures. 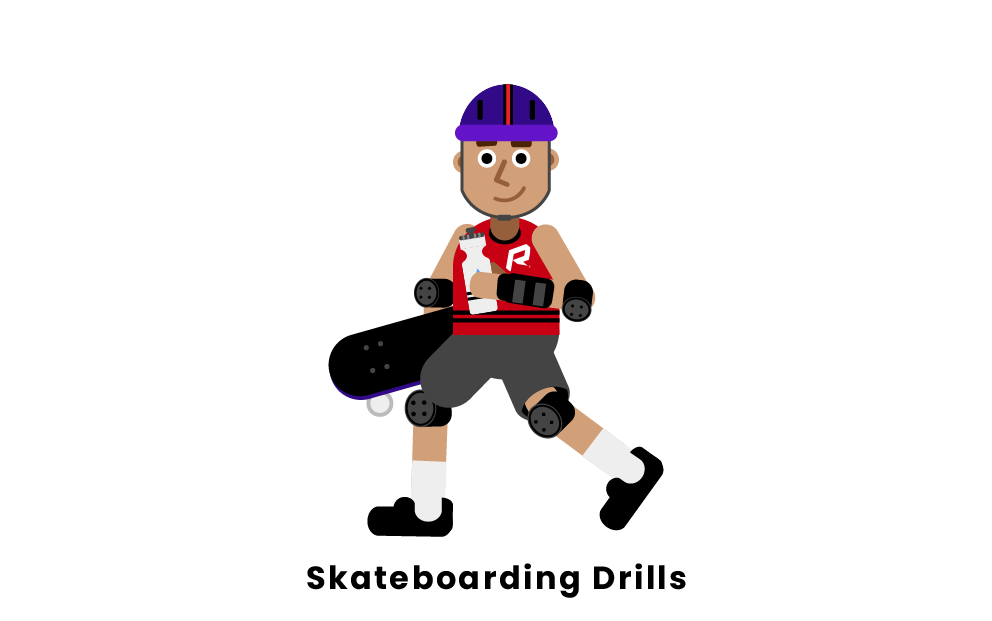 There are some simple drills that skaters of all levels do to help their performance. Many of these drills focus on balance and core-strength. By working on these aspects, skaters are able to jump higher, go faster, and stay safer when riding in competitions. Drills vary from squats to leg raises, all exercises that help with balance and strength. 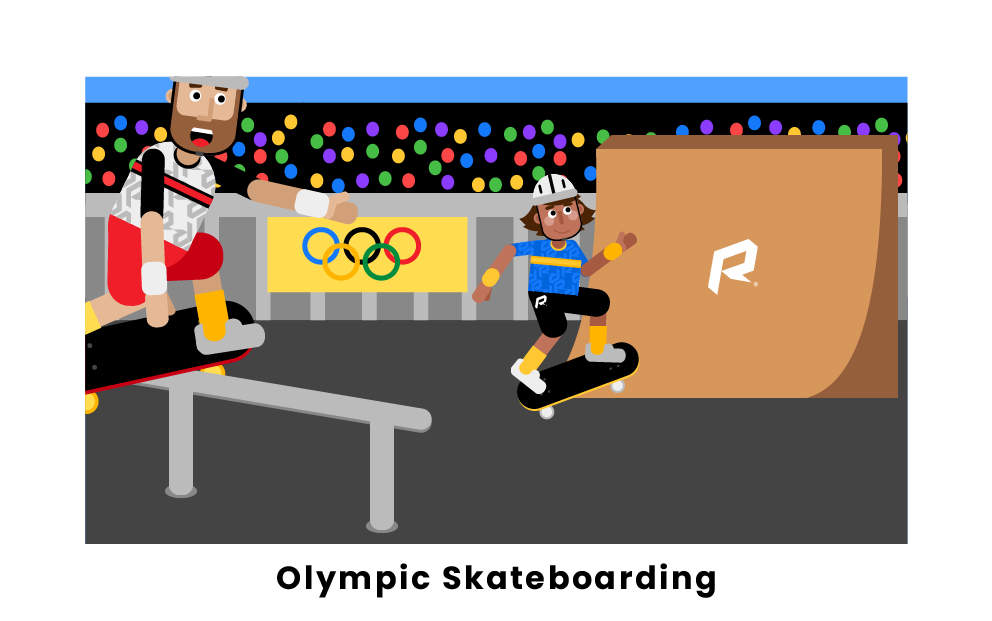 Skateboarding will be added to the Tokyo Olympics in 2021 and will continue in 2024. It will be split up into two different sections: park and street style. In order to qualify for the Olympics, skaters, both men and women, must be highly ranked according to the Olympic World Skateboarding Rankings or Season World Skate World Skateboarding Championship event. Skaters will come from across the globe, and compete for gold. 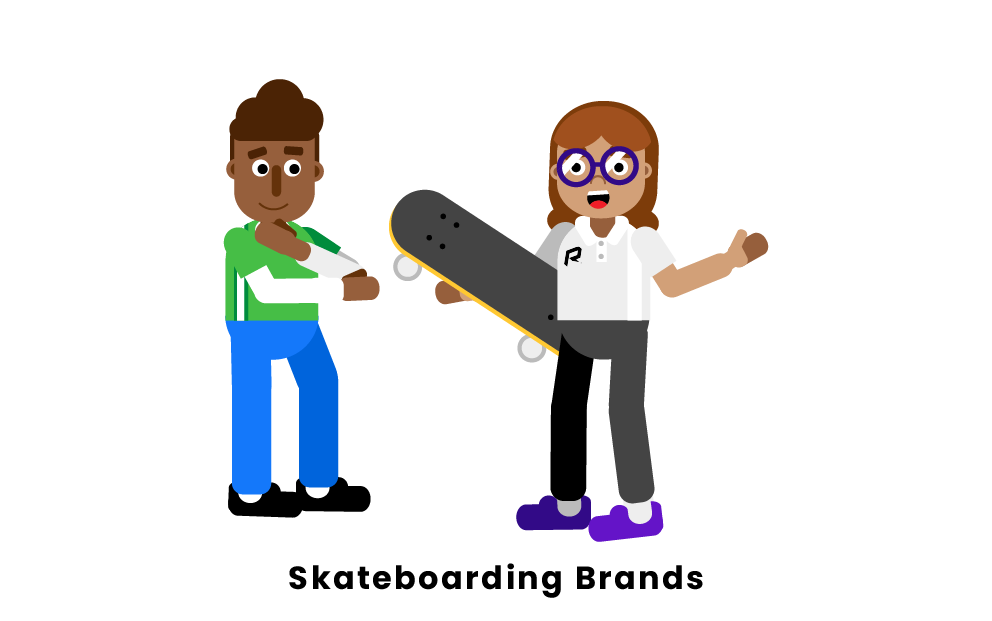 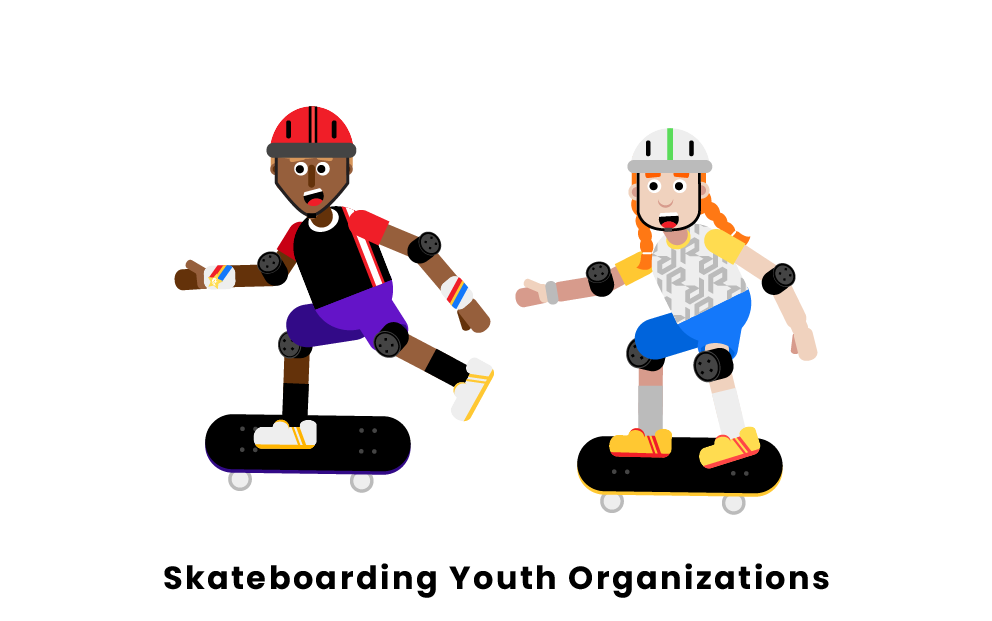 Anyone can skateboard and it is not uncommon for kids and teens to participate in competitions. There are skateboarding youth organizations that help expand access to skateboarding and skateparks across the country. Many of these organizations were started by former professional skateboarders. 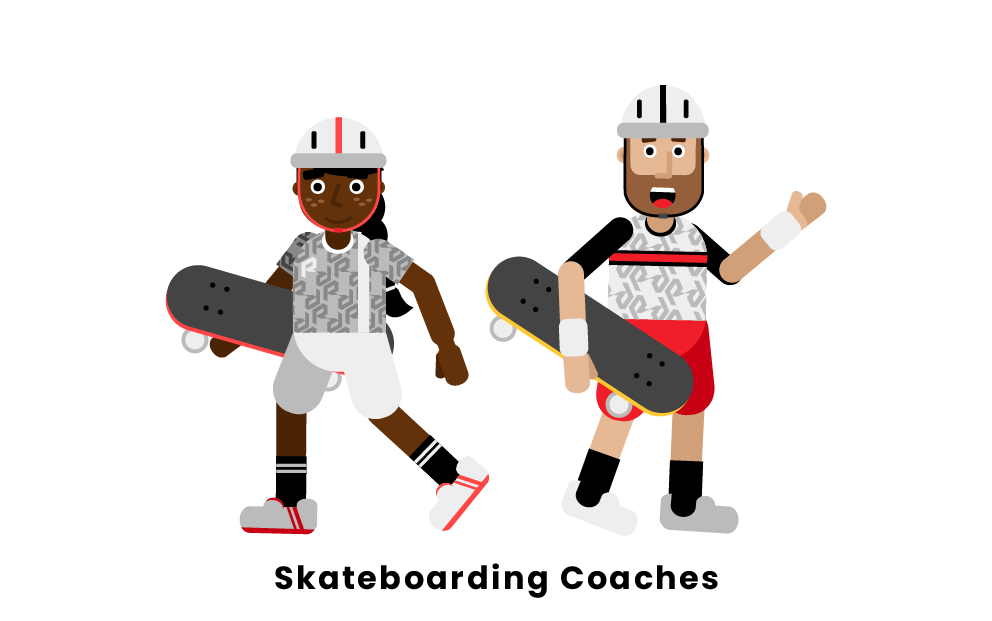 While most professional skateboarders are self-taught. At the competitive and Olympic level, many coaches help improve on the skills and techniques of professional skaters. Coaches are often mentors and former skaters who are very knowledgeable and have a lot of experience skating. 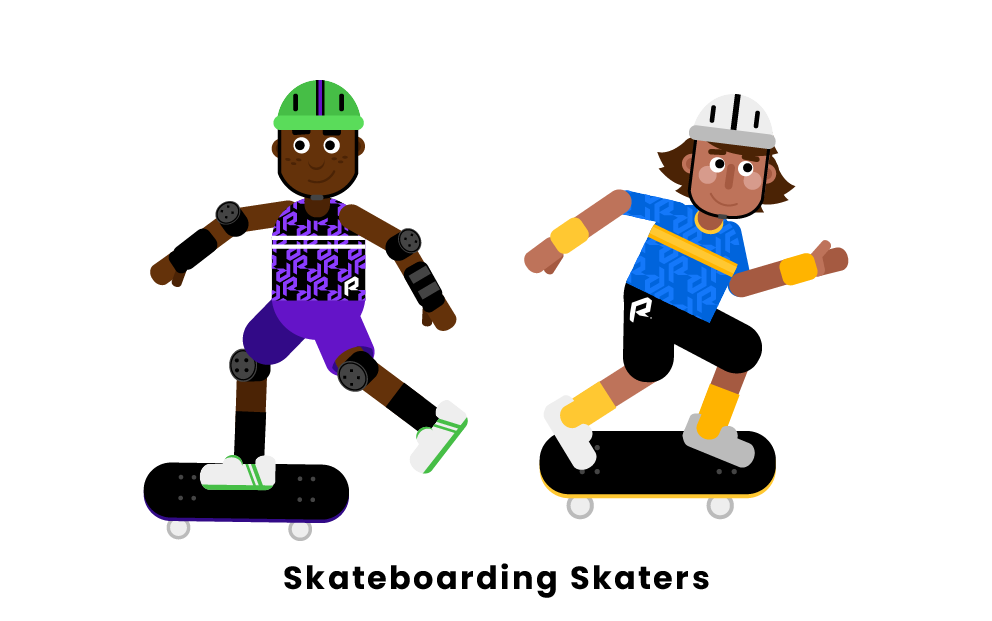 There are many professional skateboarders across the globe, but only some of them are known for being pioneers of the sport. These skaters are known for their ability to perform many of the world's most difficult skate tricks. They are also known for their versatility and speed. Here are some well known male and female skaters. 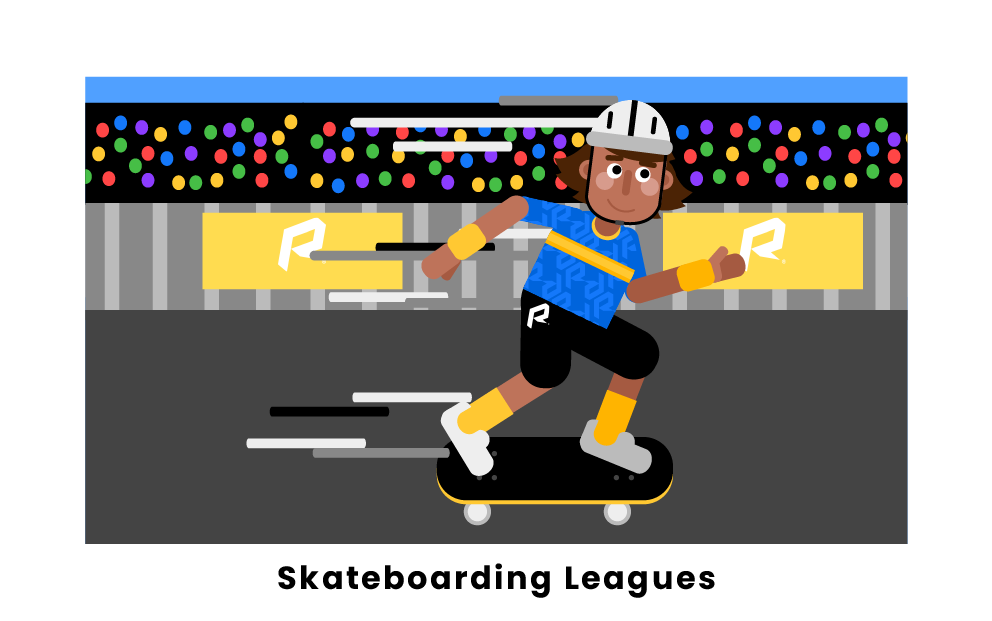 In skateboarding, there are not very many leagues as the sport often depends on national and regional competitions. There are some leagues that specialize in the different types of skateboarding and help organize competitions. 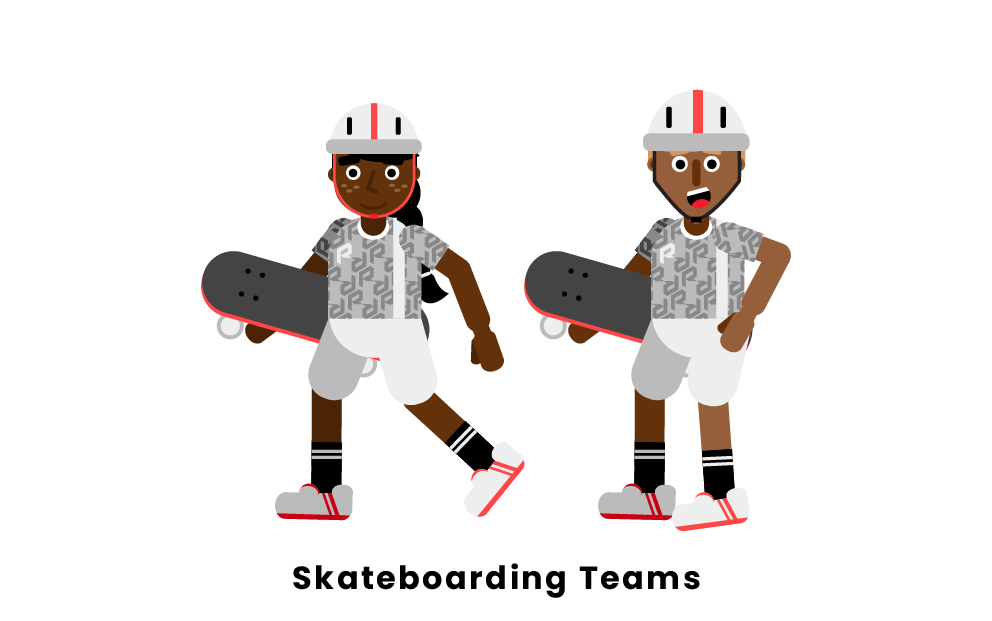 Skateboarding is unique in that there are no traditional teams as the sport is mostly individual. Besides the Olympics, teams are often made up of individuals who are sponsored by the same brand. These are the most prominent brand teams in the United States. 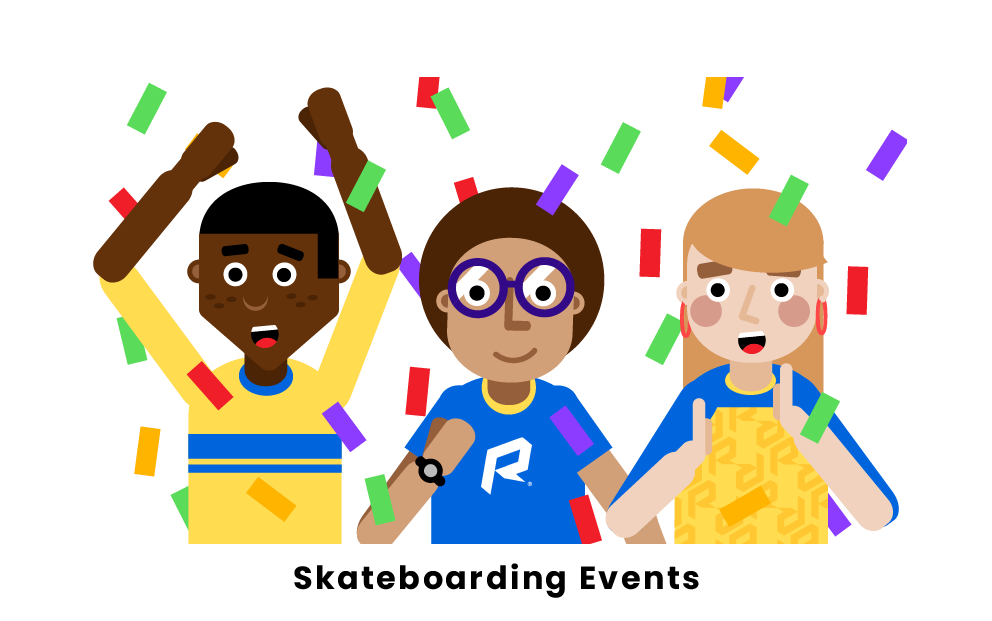 There are many different types of skateboarding books. There are nonfiction books that tell the history of the skateboard and memoirs of famous skaters who write about their experiences. Some books can also help new skaters sharpen their skills. Below find a list of popular skateboarding books for all ages: 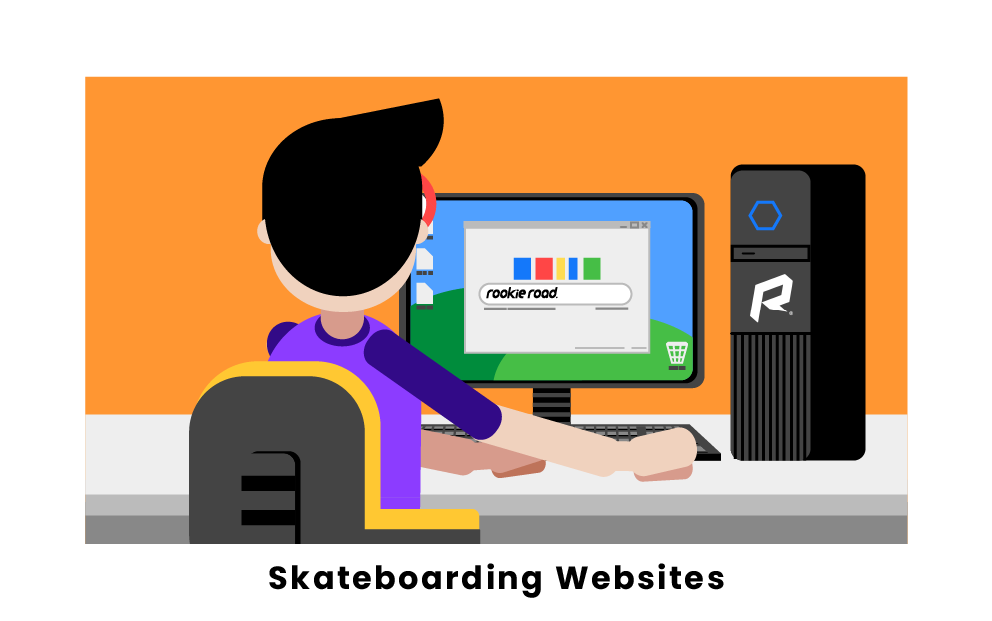 There are skateboarding websites for many different purposes. Some share some of the world's best skating highlights while others allow skaters to buy gear and apparel. There are even skateboarding magazines that have skating videos, photos and gear.

Skateboarding is both a sport and a recreational activity. It involves doing tricks on a skateboard and can be done on any hard, concrete surface.

What is the point of skateboarding?

Skateboarding is a simple recreational activity that can be done almost anywhere. It allows the skater to be creative and learn and invent new tricks. It can also be used as a mode of transportation.

Is skateboarding an olympic sport?

Skateboarding was recently added as an Olympic sport and will be first showcased in Japan at the 2021 Olympics.

How long does it take to learn skateboarding?

For beginner skaters, it often takes a couple of weeks for beginners to become comfortable balancing on the skateboard. However, skateboarders are always learning new tricks so a skater is never done learning as there is always something new to learn!

What is the best skateboard for beginners?

Each skateboarding brand has many skateboards that are great for beginners. It is important to find a standard size deck that is both strong and durable. Some popular skateboards for beginners are the Minority 32 in Maple Board, and the Puente 31 in Complete Board. Both of these are great options for beginners as they provide great quality but are also affordable.

Pages Related to What is Skateboarding?