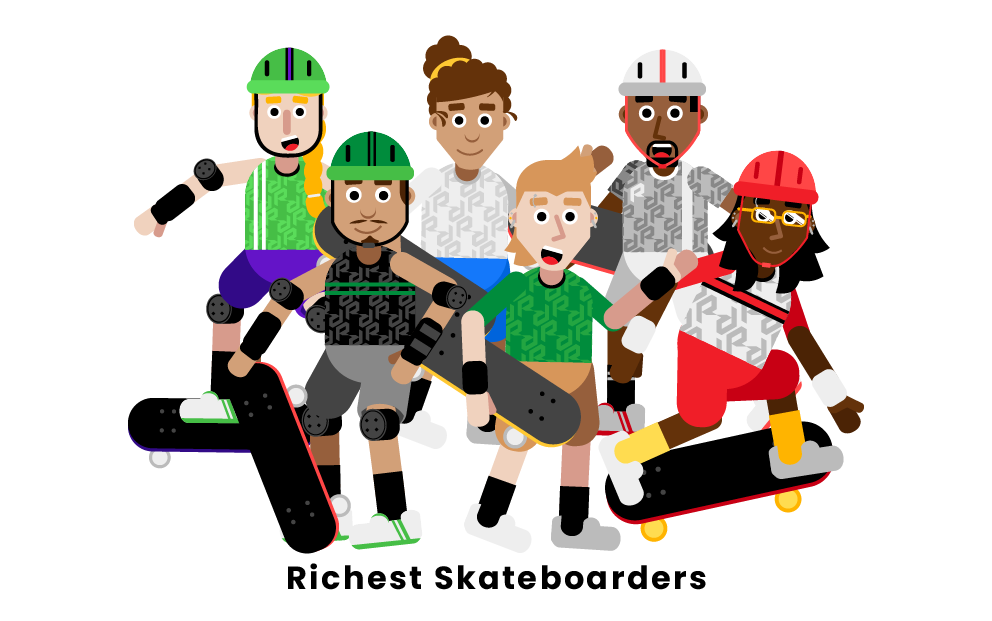 Skateboarders earn money in a variety of ways. The most popular is through becoming sponsored by a company, which gives them a base salary. There are also competitions, apparel deals, and many skateboarders even start companies of their own to make money. Some of the most ambitious and talented skateboarders have managed to amass significant net worths.

Who are the richest skateboarders in the world?

With a net worth of $140 million, Tony Hawk is by far the richest skateboarder in the world. Tony Hawk began skateboarding in the 1970s and quickly became one of the biggest names in the sport. For many years, he was dominant in competitions and made quite a bit of money that way. But much of Tony Hawk’s money comes from his deal with the video game company Activision, who produced multiple hit video games under Tony Hawk’s name. He also founded a very successful skateboarding company in the 1990s called Birdhouse. These two things combined allowed him to become very wealthy.

Rob Dyrdek is the second richest skateboarder in the world, with a net worth of $100 million. Dyrdek cultivated a successful career in skateboarding, turning pro for Alien Workshop and DC shoes, who paid him an annual salary. However, the majority of Dyrdek’s net worth came from separate ventures outside of his skateboarding career. He created Street League Skateboarding, which is a professional skateboarding league that is watched by millions every year. Dyrdek also found success in the television industry with hit shows such as Rob Dyrdek’s Fantasy Factory and Ridiculousness. He also created a skateboarding-themed toy company known as Wild Grinders, which was also turned into a TV show.

Jamie Thomas found great success in skateboarding, which he managed to convert into a net worth of $50 million. Thomas managed to secure big-name sponsorships with companies such as Thunder Trucks, Bones Bearings, and Spitfire Wheels. However, most of Thomas’ wealth came from his entrepreneurship efforts. In 1996, Thomas founded a skateboard company that he named Zero Skateboards. Over the years, Zero proved to be one of the most popular skateboard brands in the world as they sold boards, wheels, apparel, and much more. Zero featured some of the world’s most famous skateboarders on their professional team and produced some of the most famous skateboarding videos of all time.

As a result of his many years of involvement in skateboarding, Rodney Mullen has amassed a net worth of $30 million. Rodney Mullen reportedly started skateboarding in 1977, which was still very early for the sport. In fact, Mullen is credited as the inventor of some of the most famous tricks in modern skateboarding, such as the kickflip, the ollie, and the heelflip. Over the course of his career, Mullen has been sponsored by numerous high-profile teams such as Bones, Plan B Skateboards, and Enjoi. He founded multiple companies of his own, though the most famous were World Industries and Almost Skateboards, both of which he co-founded.

With a total net worth of $20 million, Stefan Janoski has made a very good living off of skateboarding. He started skateboarding in 1992 and found success by winning a few prestigious skateboarding competitions, including the Tampa Pro in 2007. However, Janoski is most famous for his signature shoe model that he created with Nike, who sponsored him at the time. The shoe found massive success, and thanks to most companies offering royalty deals to pro skaters for their shoe models, Janoski made millions off the success of his shoe model. Janoski also had other lucrative sponsors such as Mob Grip, Habitat Skateboards, and Bones Bearings.

Steve Rocco has amassed a net worth of $20 million during his long career in skateboarding. Rocco was a popular skateboarder in the early 1990s and helped to popularize the discipline of skateboarding known as street skating. Steve Rocco founded and co-founded numerous of skateboarding’s most successful companies. These include brands like Plan B, Blind, and 101. Rocco was also co-founder of World Industries, which was one of the most beloved skateboard brands of all time. The company was reportedly grossing up to $25 million per year and eventually sold for $29 million in 1998.