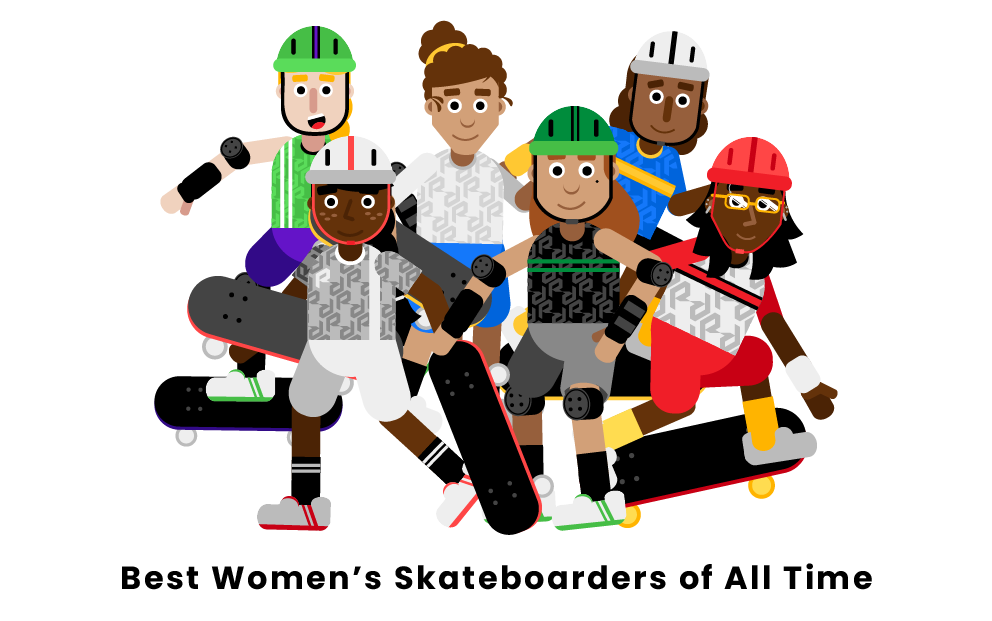 Skateboarding has been a popular sport since its inception in California during the late 1950s. Initially, the sport was dominated by males, but as times changed, many females not only became trailblazers for future generations but icons of the sport in their own right. This list highlights some of the best women’s skateboarders of all time.

Who are the best women’s skateboarders of all time?

Patti McGee is one of the most incredible females in skateboarding history for her skill and impact on the sport's future. Starting her love for the sport in the 1950s as she grew up in California, Patti quickly became a nationally recognized name. She became the first female to enter the sport dominated by men, making people notice and placing herself in history by winning the 1964 National Skateboarding Competition in Santa Monica, California. In 1965, McGee joined Hobie/Vita-Pakt and became the first sponsored Female  Skateboarder, further cementing her legacy.

Cara-Beth Burnside is one of the earliest female stars of the skateboard world. She burst into the skateboarding scene in 2003, when she won her first X Games gold medal at the Vert event. Burnside followed that up with a silver and gold medal in the same event the following two years, respectively. She continued this success over her career, ending with five total X Games skateboarding medals, five Vans Triple Crown Titles, and four All Girl Skate Jam Titles. Her continued dominance and actions as a female skating pioneer make her one of the best of all time.

Peggy Oki may not have any X Game medals since women were not yet competing in the Games during her career, but her impact on the sport is undeniable. Starting her love for the sport at age ten, she quickly excelled and made waves, joined the then boys-only Z-Boys, and won the first national competition she competed in, the Del Mar Nationals. She continued to skate with the group over her career and became an icon for crossing the previously long-standing gender barrier of skateboarding. She was finally inducted into the Skateboarding Hall of Fame in 2012.

Leticia Bufoni is one of the most talented women skating today, a fact supported by her stunning 12 total X Games Medals in addition to breaking Elissa Steamers' record for most Gold X Games medals. Competing in her first X Games in 2007, she only placed 8th in the Street Skating event, yet continued to hone her skills. She went on to win first place in Street at the 2009 Maloof Money Cup. Bufoni continued to improve every competition after, winning three X Game golds in 2013, turning pro at age 17, winning three more golds from 2018-to 2021, and eventually signing with the Nike Skateboarding team.

The first professional female street skater, Elissa Steamer, is an icon in the sport and one of the greatest. Streamer joined and was featured in Toy Machines 1996 crew and skating video, which helped jump-start her career into what it is today. Winning her first official competition at the Slam City Jam in 1998, she would continue growing and improving her skating. From 2004 to 2008, Steamer went on an astonishing run where she won four X Games gold medals, the most by a female at the time, and a record that stood for over a decade before Bufoni eventually broke it.

One of the younger members on this list, Lizzie Armanto, is still one of the greatest female skaters of her time. In 2013, Lizzie started her career by entering and winning gold at the Skate Park Freestyle event during her first X Games competition in Barcelona. She continued this rise in notoriety by winning the 2013 and 2014 Van Doren Invitationals, which took place in Huntington Beach, California. Lizzie already has three X Game medals to her name and made waves in 2017 when she became the first female skater to be featured on the front of Thrasher magazine in the last 24 years, establishing herself as one of the best.

Who is the best female skateboarder of all time?

The backside 540, commonly referred to as the "McTwist," is a complicated skateboarding trick that few have been able to perform to this day. Lyn-Z Adams was the first woman to attempt and land this trick, who landed the McTwist in 2009 during a skating event in Paris's Grand Palais. She managed to accomplish this feat in front of the skateboarding legend himself, Tony Hawk, who was also in attendance at the event.

Which women’s skateboarder has won the most X Games gold medals?

Leticia Bufoni holds the current record for the most X Games gold medals in women’s skateboarding with six total over her career; she set this record during the 2021 X Games after winning the gold. This record was previously set by Elissa Steamer, who had four gold medals herself; Steamer's record of four gold medals lasted for over a decade before Bufoni tied it in 2019 and was finally broken when Bufani claimed the record for herself in 2021.

Pages Related to Top 6 Best Women's Skateboarders of All Time