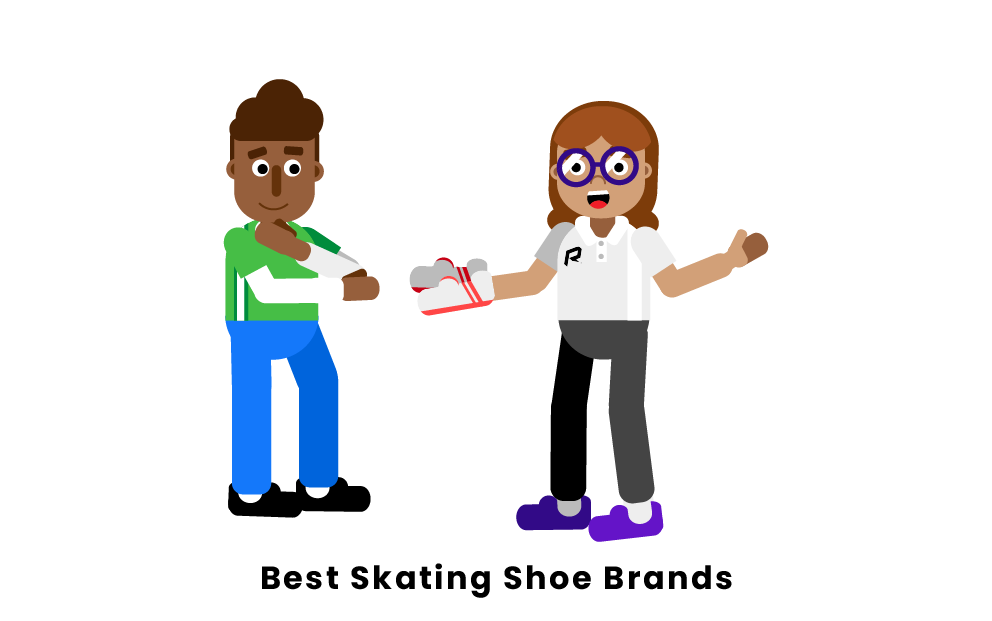 As one of the most iconic parts of any professional skateboarder's equipment, skating shoes can vary by quality of both material and design to make a lasting, comfortable, and stylish product. Listed below are the top six best skating shoes brands for skateboarders, from the most novice to those worn by world champions.

What are the most popular skating shoe brands?

Since their first shop opened in 1966, Vans has been one of the top manufacturers of skate shoes. Spreading outward from Anaheim, the brand became iconic for its durable, rugged makeup and sticky sole. Over the five decades since, Vans has expanded its collection to include five styles of classic skater shoes and a variety of clothing and merchandise. Due to their quality and popularity, many famous skateboarders represent the Vans team, including Tony Hawk, Lizzie Armanto, and Geoff Rowley. According to Kevin Bailey, EVP and Group President of Vans, the company does not seek celebrity endorsements or sponsorships. Instead, the brand seeks a more authentic branding based on the quality of the skating shoes they produce.

Founded in 1908, Converse has made some of the best athletic shoes in America for over a century. Thanks to a now-infamous endorsement in 1921 by Chuck Taylor, Converse rose to fame as the premier shoe for professional basketball. After six decades of fame, the company branched out to provide shoes for the increasingly popular sport of skateboarding and became even further known for their durability and comfort. After retiring from the production of performance basketball shoes, Converse ended their sponsorships of specific collegiate teams. However, their shoes are still worn by many famous skaters, including Kenny Anderson, Nick Trapasso, and Eli Reed.

Originally founded in 1964, Nike is the world's largest athletic shoes and apparel supplier. Though their success as a brand covers a myriad of sports, the company began producing several high-quality shoes specifically designed for skateboarding towards the end of the twentieth century. Nike skating shoes are well known for being lightweight and moderately priced while ensuring a great board feel and short break-in time. Thanks to their international acclaim, Nike's skating shoes are worn by many professional skateboarders from around the world, including Nicole Hause, Stefan Janoski, Korahn Gayle, and Max Geronzi.

Started in 1924, Adidas is the largest sports manufacturer in all of Europe and the second-largest in the world. The company produces top-quality apparel and merchandise for over twelve professional sports, including skateboarding. Adidas is specifically known for making skating shoes that are strong and durable, well-ventilated enough to prevent overheating and sweating, and tight enough to maintain comfort. Their signature mark is a thick rubber outsole that provides superior traction for sticking to the skateboard. As any internationally renowned sports brand would, Adidas skating shoes are worn by many professional skateboarders across the globe, including Tyshawn Jones, Mark Gonzales, Nora Vasconcellos, and Dennis Busenitz.

Owned by parent company Sole Technology Inc., Etnies is an athletic footwear brand that was started in 1986 by retired professional skateboarder Pierre André Sénizergues. In 1987, with the launch of the Natas, Etnies created the first pro-model skateboarding shoe. In the nearly four decades since that historical moment, the company has been known for providing some of the fashionably sleekest and high-quality skating shoes on the market. Additionally, Etnies has become known for its sustainability program called the Etnies Footprint Program, which promises to plant a tree for every shoe purchased. Etnies sponsors several high-profile professional skateboarders, including Ryan Sheckler, Chris Joslin, Aidan Campbell, Matt Berger, and Trevor McClung as part of their corporate skate team program.